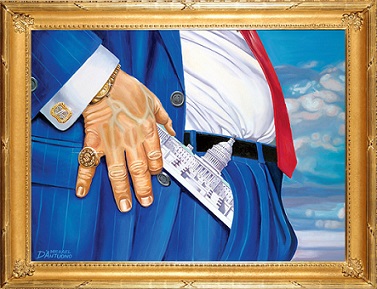 Let’s face it – The Democratic Party is the new Socialist Party. While they are always certain to stick the word democratic in front of socialism, to make it more appealing, that doesn’t change the reality that socialism is about taking your stuff and your freedom and killing you if you complain. Socialism means what is theirs is theirs and so is what’s yours. It’s that simple.

Unfortunately a new dumbed down generation has been indoctrinated to believe that democratic socialism will be different from communism but, without the checks and balances of a constitutional republic to limit government power, socialist regimes always turn tyrannical. The difference between democratic socialism and authoritarian socialism is the difference between a mob voting for the seizure of private property and a dictator—elected by that mob—ordering the seizure of private property.   What does that say for our nation’s future?

I must admit that I was truly surprised that Alexandria Ocasio-Cortez won the N.Y. primary against the Democratic incumbent and even more surprised that she has become the face of her pathetic left-wing party. But she is no fluke – She’s part of a trend. Arguably the most interesting aspect of Cortez’s portfolio is her membership in the Democratic Socialists of America (DSA), an organization founded in 1983 as an offshoot of the merger of the Socialist Party of America and the New American Movement whose sole purpose was to nudge Democrats emphatically to the left and polarize both political parties along class lines. They also helped Bernie Sanders establish the Congressional Progressive Caucus (CPC) in 1991 and today, virtually every CPC member also belongs to the Democratic Socialist of America. It is interesting to note that in 2010 the Communist Party USA’s political action committee identified the CPC as its “allies in Congress.”

“We are socialists,” reads the organization’s boilerplate, “because we reject an international economic order sustained by private profit, alienated labor, race and gender discrimination, environmental destruction, and brutality and violence in defense of the status quo.” In order to achieve a “more just Society” they want to “radically transform” America through redistribution of wealth. “Equality, solidarity, and democracy can only be achieved through international political and social cooperation aimed at ensuring that economic institutions benefit all people.”

As usual, all those rich, well-endowed socialists don’t believe the peasants know what’s in our own best interests so they are forced to make the world a better place for us—and they will do it by force, even if it means a boot in our faces forever.

Of course, these anti-social dreams have wax wings, and they are waxing more precarious by the day. Social media has made it all too easy for the same despised masses young and old to behold what socialist policies do to a country. Let’s just hope they are not too stupid to understand what they see.

“Sadly, a mere 28 years after the collapse of communism, a new generation of youth not then born or too young to understand it see that epochal event as ancient history, irrelevant to their new understanding of the world. They do not understand that the topping of communism wasn’t merely a repudiation of the gerontocratic rulers of communism, but of the very idea of socialism.” Editorial, Investor’s Business Daily

Source: Election 2018: Open Border Socialist Delusions—and Reasons for Hope by  Arthur Schaper; Democrats Love Socialism Because They Want To Take Your Stuff And Enslave You, by Kurt Schlichter, Townhall; Democratic Socialist of America, at Discover The Network; Democrats Turn to Socialism, The Trumpet

← Sociologists Embrace Marx’s Dictum to Change the World
Who Died and Made the Supreme Court God? →