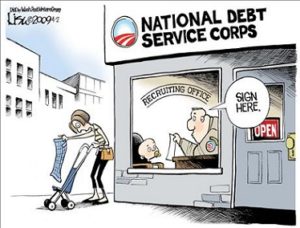 Congress is bankrupting the country and robbing future generations to pay for it. A debt crisis, and all the terrible economic effects of that crisis, is looming – And both parties are equally guilty – Every single congressional leader is to blame.

At the close of the federal government’s September 2017 fiscal year, the government had roughly:

Combining those figures with the national debt and subtracting the value of federal assets, the federal government had about $88.9 trillion in debts, liabilities, and unfunded obligations at the close of its 2017 fiscal year. This $88.9 trillion shortfall is 92% of the combined net worth of all U.S. households and nonprofit organizations, including all assets in savings, real estate, corporate stocks, private businesses, and consumer durable goods such as automobiles and furniture. It equates to $272,405 for every person living in the U.S.; $704,391 for every household in the U.S. ; 456% of the U.S. gross domestic product; and, 2,485% of annual federal revenues. And these figures do not account for the future costs implied by any current policies except those of the Social Security and Medicare programs.

As detailed in publications by the Congressional Budget Office, the Brookings Institution, the Cato Institute, the Heritage Foundation, etc. the consequences of unchecked government debt will reduce our standard of living and our wages, require cuts to government programs, lead to higher marginal tax rates, higher inflation and thus a decrease in the purchase power of consumers, restrictions on government’s ability to respond to economic or international crisis, losses for holders of mutual funds or government debt, to name just a few. Unchecked debt will also force government to pay more to borrow money, further increasing our debt.

Other than interest on the national debt, most of the long-term growth in federal spending, as a percent of GDP, under the Congressional Budget Office’s current policy and law, stems from Social Security, Medicare, Medicaid, the Children’s Health Insurance Program and ObamaCare subsidies.  These programs, along with interest on the national debt, according to CBO projections, will outpace all revenues collected by the government by 2039.

To meet our huge fiscal challenges, it will be necessary for Congress to reform entitlement programs and cut spending across the board. But that is a pipe dream as long as government is “greased” by special interest and our representatives rely on pork to stay in power. It will be necessary to impose restraints to force Congress to make those tough decisions.

While a Balanced Budget Amendment would be a good reform, Congress directly controls spending, not deficits, so perhaps a better restraint might be a cap, either statutory or constitutional, on the annual growth in total federal outlays to limit growth to the growth in a chosen economic variable such as output or incomes.

“The multiplication of public offices, increase of expense beyond income, growth and entailment of a public debt, are indications soliciting the employment of the pruning-knife.” Thomas Jefferson