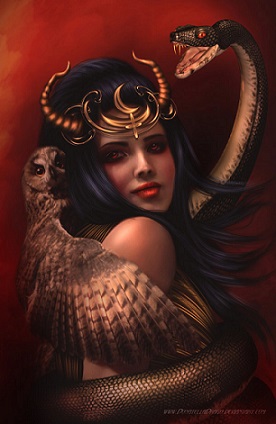 The left never misses an opportunity to belittle Christians and/or the Word of God.

One such attempt was a story on the History Channel about Lilith which claimed that “some” biblical scholars accepted her as Adam’s first wife. Lilith, accordingly, was banished when she disobeyed Adam and God created Eve as his new wife.

Naturally, in order to sell this myth, these same so-called “scholars” claim that the Bible has been heavily edited which is simply not true.  Lilith’s name was never removed from the Bible because she doesn’t exist.  Prior to the middle ages, the word Lilith or Lilitu was just another word for a demon and held so specific reference to the story of creation.

The name Lilith is first mentioned in ancient Babylonian texts as a class of winged female demons that attacks pregnant women and infants. From there her legend spread to ancient Anatolia, Syria, Egypt, Greece, and was carried into Israel from those held captive in Babylon where she became part of Jewish folklore. Many scholars believe this Jewish folklore was inspired by Sumerian myths about female vampires called “Lillu” or Mesopotamian myths about succubae – female night demons – called “Lilin.”

While Lilith is mentioned 4 times in the Babylonian Talmud she is not referred to as Adam’s wife. However, a glimpses of her eventual association with Eve can be seen in Genesis Rabbah 18:4, a collection of midrashim about the book of Genesis.  Here the rabbis describe the “First Eve” as a “golden bell” that troubles them in the night. “’A golden bell’… it is she who troubled me all night…Why do not all other dreams exhaust a man, yet this [a dream of intimacy takes place] does exhaust a man – Because from the very beginning of her creation she was but in a dream.”

For those not familiar with the Babylon Talmud, it is a vast collection of Jewish laws and (man’s) traditions. While some of the teachings from the Talmud may be “compatible” with biblical teachings, the same can be said for many different writings from many different religions. For the Christian, the study of the Talmud can be a great way to learn more about Jewish tradition, history, and interpretation, but the Talmud is not to be considered the authoritative Word of God nor is it taught as such.

It was not until the Alphabet of Ben Sira, an apocryphal work from the tenth century, that Lilith is ever associated with God’s creation. In this medieval text Lilith is described as constantly fighting with Adam because they couldn’t agree on who would be on top during sex. She magically sprouts wings, having obtained power to do so by uttering the sacred name of God, and flies away. When God sends a few mythical angels to chase her down she refuses to return to the Garden, vowing instead to kill babies in retaliation for Adam’s mistreatment and God’s insistence on slaying 100 of her progeny daily. According to this story Lilith believed that God had created her only to afflict male babies with a fatal disease up until the age of 8 days and girls up to the age of 12 days.

In the 13th century Lilith  became a figure of cosmic evil in the Treatise on the Left Emanation where she is seen as the female consort of Samael, an archangel, who had seduced the serpent to evil in the Garden of Eden. Long identified as the angel of death and the guardian angel of Rome, he and Lilith emanated together from beneath the Throne of Glory as a result of the sin of Adam and Eve.

These two mythological characters were further developed in the Zohar where they emanated together from one of the divine powers, the sefirah of Gevurah (strength) on the side of evil, corresponding to the holy divine female and male. In this version Lilith, the harlot, was created as Adam but from filth and sediment instead of pure dust. From her union with Adam sprang innumerable demons that still plague mankind. She is also presented as being the mistress of God, a direct result of the destruction of the temple and the exile of Israel and will continue as such until the coming of Christ when God would end the degrading affair and her existence as well.

Her legend grew and changed over the following centuries where she was portrayed as a beautiful woman, often seen in a sinister light, a demon or as the serpent in the Garden of Eden who convinced Eve to eat the forbidden fruit.

In 1972 Lilly Rivlin published an article on Lilith for the feminist magazine Ms, In Some Mythology, Lilith, Not Eve, Was First Woman Created Simultaneously With Adam, presenting her not as a demon with wings but as a powerful woman who could not be controlled by men. According to Rivlin, she had always been repelled by the myth of Eve because of her submissiveness but with the discovery of Lilith she found the wind and wrote a new creation. By 1976 Jewish feminist claimed Lilith as they name of their magazine because they were also inspired by her fight for equality with Adam.  Now you know – the whole feminist movement is based on a myth!

Unfortunately, the Alphabet’s and the Zohar’s irreverent image of Lilith has been taken as serious in modern times. Modern feminists quote these two medieval stories more than any other source in explaining their version of Lilith. They promote Lilith as the proto-feminist, willing to sacrifice even the paradise of Eden as the necessary cost of freedom and equality. The series of musical concerts called Lilith Fair founded by Sarah McLachlan in the late 1990s is perhaps the most brazen example. A few neo-pagan groups have taken up her cause as well, either accepting her dark nature as sacred or finding in her an expression for the erotic goddess within them.