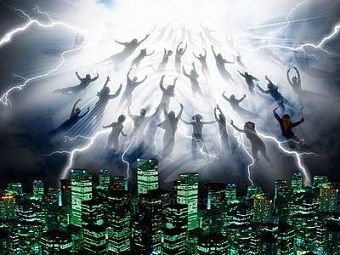 Will Christ return before or after the Great Tribulation? This is a question that draws ire from many of the rapture based churches. How dare we question man’s traditions.

The Second Advent is a major doctrine of both the Old and New Testament. Of the numerous passages in the Old Testament my favorites can be found in Daniel 7:13-14 which states that the Second Coming marks the termination of the times of the Gentiles and the beginning of the reign of God’s kingdom on earth and Zechariah 2:10-12 which covers not only the 2nd Advent but Christ’s inheritance in the Holy Land in the city of Jerusalem.

While the Old Testament speaks only of a Second Advent, churches that push the rapture doctrine try to convince their followers that God has revealed a secret Advent in the New Testament, one in which Christ returns to rapture out his children before the great Tribulation and before the fulfillment of prophecy of his 2nd Advent in the Old Testament.  However, the Bible only teaches two Advents. Hebrews 9:28 distinctly tells us that for those who wait for Him, He will appear a second time – there is no third Advent mentioned, secretly or otherwise.

Its human nature to want to avoid the unknown and some preachers really go to town pushing all sorts of gory details regarding the tribulation so when the rapture is tossed out as a safety line, many will gladly grasp it. Yet Christ taught in Luke 21 that we should not fear the tribulation because not a single hair on our head would perish. Again in Revelation 9:4 we are told that Satan in his role as the anti-Christ and his army could hurt “only those men which had not the seal of God…..”

In Matthew 24, Mark 13 and Luke 21, Christ tells his disciples what to expect before His return and nowhere does He mention rapture. As a matter of truth, Christ is adamant that His elect will be delivered up to the anti-Christ for a testimony, and assures them that they have nothing to worry about because as it is written in Luke 21, v. 15, He shall “give you a mouth and wisdom, which all your adversaries shall not be able to refute nor resist,” that mouth being the Holy Spirit speaking through you. It would be extremely hard for God’s elect to testify if they are no longer on this earth during this period.

We also read in Rev.9:5 that the tribulation was shortened to five months, a second witness to Matthew 24:22 in which Christ said “except those days be shortened, there should no flesh be saved (from the deception), but for the elect’s sake those days shall be shortened.” Again, why shorten the days of the Tribulation if God’s children are gone?

Christ is very specific in Mark 13:24-27 “But in those days, after that tribulation, the sun shall be darkened and the moon shall not give her light, and the stars of heaven shall fall, and the powers that are in heaven shall be shaken. And then shall they see the Son of man coming in the clouds with great power and glory….”

These words of Christ and those words written by Paul in 1 Thessalonians 4 cover the same subject – the 2nd Advent, not rapture. In Chapter 4:13-17 Paul is simply saying that those in the church should not be ignorant concerning the dead which are already in heaven. When Christ returns at the 2nd Advent, those that are alive on this earth will meet Christ and those Christians who have preceded them in death in their spiritual bodies. Apparently his first letter confused many in the church so he wrote them a second letter advising them in 11 Thessalonians verse 4 to  “let no man deceive you…for that day shall not come except there come a falling away first and that man of sin be revealed, the son of perdition (Satan in his role as the anti-Christ); who opposeth and exalteth himself above all that is called God or that is worshipped; so that he as God sitteth in the temple of God, shewing himself that he is God.”

He continues in verse 8-11 “And then shall that Wicked be revealed whom the Lord shall consume with the spirit of His mouth, and shall destroy with the brightness of His coming: Even Him whose coming is after the working of Satan with all power and signs and lying wonders, And with all deceivableness of unrighteousness in them that perish; because they received not the love of the truth that they might be saved. And for this cause God shall send them strong delusion, that they should believe a lie….”

God knows all things. That is why He warned us in Ezekiel 13:17-23 that he is against those who would teach His children to fly to save their souls. “I am against your charms wherewith ye there hunt the souls to make them fly and I will tear them from your arms and will let the souls go, even the souls that ye hunt to make them fly….Therefore ye shall see no more vanity, nor divine divinations; for I will delivery my people out of your hand: and ye shall know that I am the Lord.”

← Are these Civil Rights?
Deep Perversions Grieving the Spirit of God – What Might We Expect Next →

2 comments for “The Secret Advent?”