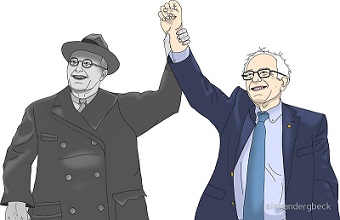 “Great accumulations of wealth cannot be justified on the basis of personal and family security. In the last analysis, such accumulations amount to the perpetuation of great and undesirable concentration of control in a relatively few individuals over the employment and welfare of many, many others.” Franklin D. Roosevelt

FDR was a democratic socialist in the same sense that Bernie Sanders is a democratic socialist and for the same reasons. Bernie Sanders sought to wrap himself in the mantle of Franklin D. Roosevelt’s efforts to end the great depression. “Against the ferocious opposition of the ruling class of his day, … Roosevelt implemented a series of programs that…redefined the relationship of the federal government to the people of our nation. He transformed the country…” But what did he transform it to?

FDR imposed one socialist program after another upon Americans, programs that some historians and economists claim made the great depression even greater in scope and length. Critics liken his New Deal to fascism.  Wolfgang Schivelbusch, in his book, Three New Deals: Reflections on Roosevelt’s America, Mussolini’s Italy, and Hitler’s Germany, 1933-1939, makes it very clear that not only are these critics correct in their assessment but supporters and opponents of the New Deal during the 1930s recognized it as well.

When he took office in 1933, Roosevelt received from Congress, an extraordinary, unprecedented delegation of powers to cope with the Great Depression. Basically, they gave away their legislative powers to the executive branch, leaving only the Supreme Court as a check on FDR’s powers. A similar process in Germany allowed Hitler to assume legislative power after the Reichstag burned to the ground in a “suspected case of arson” on February 28, 1933.

The Nazi press loved the New Deal, reporting that “America, like the Reich, had decisively broken with the uninhibited frenzy of market speculation.” They stressed “Roosevelt’s adoption of National Socialist strains of thought in his economic and social policies,” even praising his style of leadership as compatible with Hitler’s own dictatorial powers.  Hitler himself told an American ambassador, William Dodd, that he was “in accord with” FDR and that the moral demands which FDR placed before every individual citizen of the U.S. were “also the quintessence of the German state philosophy.”

While Roosevelt never had much use for Hitler Mussolini was another matter. “I don’t mind telling you in confidence,” he remarked to a White House correspondent, “that I am keeping in fairly close touch with that admirable Italian gentlemen.” FDR’s advisor Rexford Tugwell had his own difficulty containing his excitement for Mussolini’s program to “modernize Italy, calling it “the cleanest…most efficiently operating piece of social machine I’ve ever seen. It makes me envious.”    Mussolini, in turn, wrote a glowing review of Roosevelt’s Looking Forward which he found “reminiscent of fascism…the principle that the state no longer leaves the economy to its own devices.”

While today most Americans are taught that Hitler, Mussolini and FDR were polar opposites, in truth all three were a new style of leadership with much in common. It is also a misconception that Hitler and Mussolini were hated dictators feared by the people they ruled. Quite the contrary, both were, at least in those pre-war years, like FDR, the object of considerable adulation.

Hitler’s and Roosevelt’s nearly simultaneous ascension to power do highlighted fundamental differences but contemporary observers noted that they shared an extraordinary ability to touch the soul of the people. Their speeches were personal, almost intimate, giving the impression that they were addressing individuals rather than the crowd. There was never any doubt that Hitler, Roosevelt and Mussolini were charismatic leaders that rejected laissez-faire in favor of a new gospel of state managed economies.  Yet, unlike Hitler and Mussolini, FDR did preserved civil liberties.

Even though the New Deal was “soft fascism,” the elements of compulsion were not lacking.  The Blue Eagle campaign of the National Recovery Administration allowed businesses who “cooperated” to display NRA posters proving compliance with the government program.  And while compliance was “voluntary,” the head of the program, General Hugh Johnson, did not shrink from appealing to illegal mass boycotts to ensure the desired results because “the public simply couldn’t tolerate non-compliance.”  As one historian put it, the blue Eagle campaign was “based on voluntary cooperation, but those who refused to comply were forced into participation.”  In his book, Schivelbusch compares this use of mass psychology to the heavy psychological pressure used in Germany to force contributions to the Winter Relief Fund.

Both the New Deal and European fascism were marked by what Wilhelm Röpke aptly termed the “cult of the colossal.” The Tennessee Valley Authority was far more than a measure to bring electrical power to rural areas – It symbolized the power of government planning and the war on private business. The massive dams in the Tennessee Valley became monuments to the New Deal, just as the New Cities in the Pontine Marshes were monuments to Fascism. Beyond that, the TVA was also directed against an internal enemy – capitalism.

John T. Flynn’s great book of 1944, As We Go Marching, when comparing the New Deal with fascism, foresaw a problem that still faces us today. According to Flynn, the New Deal put itself into the position of needing a state of permanent crisis or a permanent war to justify its social interventions. “It is born in crisis, lives on crisis, and cannot survive the era of crisis…Hitler’s story is the same. We must have the enemies. They will become an economic necessity for us.”

“The Left has come to represent increasing government control. The extreme leftist typically seeks total government. Working their way toward total government power are the Communists, socialists, fascists, and modern liberals who advocate government solutions for every real or imagined problem.” John McManus, quotes about Fascism

← Is the Lion Sleeping in America?
If Accusation Equals Guilt, the Bill of Rights Is Dead →

1 comment for “FDR and Bernie Saunders: Two Peas In A Pod”