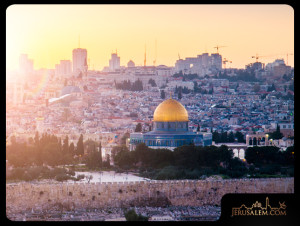 Islam has no claim to Jerusalem, period – never has – never will.

Egyptian scholar Youssef Ziedan, who specializing in Arabic and Islamic studies, is the director of the Manuscript Center at the University of Alexandria, and author of more than 50 books. Professor Ziedan  gave a series of interviews to Egyptian television in which he emphasized one issue: THERE IS NO CONNECTION BETWEEN JERUSALEM AND ANCIENT ISLAM.

When Islam was founded during the 7th century, in what is now Saudi Arabia by Muhammad [570 AD to 632 AD], Jerusalem was the holy city of the Jews. The City was not taken by Islam until the siege of 637 AD and the Mosque of Omar not built until 74 years after Muhammad’s death.

The Temple, the Dome of the Rock, was erected by the Muslim ruler Abd el-Malik in 688-691. Sometimes referred to as the “Mosque of Omar,” actually the Dome of the Rock is neither. Omar built an earlier structure, but not the Dome of the Rock and, this building is considered a shrine and not a mosque. Men pray instead at the Al Aqsa mosque located 200 meters to the south because they believe that this is the place where Abraham nearly sacrificed his son Ishmael.  Unfortunately their history is slightly off since Abraham nearly sacrificed his son Isaac.  Ishmael was Abraham’s son by his wife’s Egyptian handmaid, who according to Genesis 21:9-21 became  the father of twelve sons thought to be the beginning of the twelve Arabic tribes.

The Al Aqsa Mosque is more important to Muslims than the Dome of the Rock. Believing that this is the place referred to in the Koran as “al aqsa” (the furthermost), Muslims have sanctified this as the third most holy place in the Muslim world (after shrines in Mecca and Medina, both in Saudi Arabia). The original mosque was built in 715 AD but it has been destroyed numerous times by earthquakes.

“Muslims need to think about their current attitudes towards the Jewish question,” according to Ziedan who says that the “Middle East” problem is attributed to ignorance, stupidity, indoctrination and closed mindedness.  Muslims politicians are purposely and falsely turning a political struggle between Israel and the Arabs into a religious one.

This phenomenon first occurred in Muhammad’s own lifetime when he attempted to win over Jews living near his hometown of Medina by announcing that all prayers would be directed toward Jerusalem. As soon as he was rebuffed, he redirected Muslim prayers toward Mecca. When the Muslims later conquered the Holy Land, they totally ignored Jerusalem and established their capital in Ramle.

Jerusalem also became the focus of jihad and religious furor during the 12th century Crusades because then Muslim leader Salah a-Din needed to inflame his warriors against the Christian Crusaders. And with the return of the Jews to their homeland in 1948, Muslims once again made Jerusalem the focus of their religious life for political expediency however, statements by terrorist organizations throughout the Middle East remind us that all this religious furor is a ruse to rid the Middle East of Jews.

Professor Ziedan is often called a heretic by other Muslims for his honesty concerning Jerusalem. During the reign of the Muslim Brotherhood in Egypt his book “Arabic Theology” got him charged with blasphemy because he argued that Islam came from the Jewish and Christian faiths.

Evidence of Israel’s ownership to the Holy Land is continually being unearthed.  Just recently the royal seal of King Hezekiah who ruled Jerusalem 727 BC to 698 BC was discovered.  The stamped clay seal, also known as a bulla, was discovered in the Ophel excavations led by Dr. Eilat Mazar at the foot of the southern wall of the Temple Mount in Jerusalem. New discoveries are being made every day concerning Jewish life in the Holy Land.

It is also interesting to note that Jerusalem is mentioned a minimum of 650 times in the Christian Bible and never once in the Koran.

← If Accusation Equals Guilt, the Bill of Rights Is Dead
America Plumbing the Depths of Satan? →