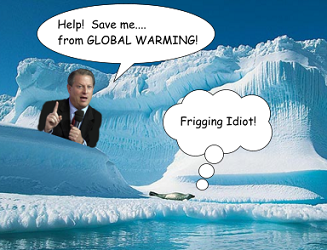 “The urge to save humanity is almost always a false front for the urge to rule.” H. L. Menken

Was P.T. Barnum right? Is there a sucker born every minute? The global warming crowd certainly hopes there is!

An article, The Sinking State, by Joshua Keating of Slate, published in the Washington Post ,claimed that rising seas caused by global warming would “probably” destroy Kiribati.  Get out the hanky – he also claimed that the entire nation of 110,000 “could” become little more than a “reinforced platform with a flag perched in the open ocean…”

The only proof Keating offered for this outlandish claim was a report sent to the U.N. from Kiribati’s former president, a report without any scientific documentation, demanding money to save these islands.  Can’t say I blame him – didn’t Obama promise to give all of America’s money away?  His only problem was not realizing that there was a new sheriff in town.

In order to keep this global warming scam alive, a bunch of journalists, and I use that term loosely, headed to the Island to document it sinking into the Pacific. What they found were inhabitants denying the islands were sinking. One journalist chalked it up to a “mental block” that makes the locals blind to the truth. There is blindness alright but it certainly isn’t on the part of the inhabitants.

Actual science also disagrees with the left’s claim. A 2010 paper in the journal Global and Planetary Change used aerial and satellite photos on 27 central Pacific coral reef islands that included Kiribati. They found that over periods of 31 to 65 years all  the islands they examined exhibited an increase in land mass.  Another study in 2013. published in the journal Sustainability Science. used aerial and satellite photos to examine “changes in shoreline position on the majority of reef islands in Tarawa from 1943 to 2007, and found that these islands “substantially increased in size.”

Despite the widely held perception of the global warming crowd that reef islands around the perimeter of coral atolls are eroding and will disappear as a consequence of sea level rise, the total area of reef islands has increased over recent decades.  The study determined that the vast majority of this increase was from human activities. For example, people filling in marine areas with materials from nearby beaches and shore areas to create new land. Yet, even in rural areas where natural processes dominate, the study found that “most reef islands show stability” and have had “modest natural rates” of growth which goes to prove that the only mental block resided with the global warming scammers.

The ocean’s waters are not evenly distributed like they are in small bodies of water. The sea level in the Indian Ocean is about 330 feet below the worldwide average, while the sea level in Ireland is about 200 feet above average. And it wouldn’t even matter if all the oceans were connect – variations in sea level are caused by gravity, winds and current – not global warming.  As an example, between 1991 and 2010, the sea level rose by around 6 inches in the tropical Western Pacific while falling by the same amount in San Francisco, which is an area that should be swamped, if for no other reason than to clean it up.

Long before humans began using fossil fuels, the earth and its climate changed. Every area of the continent has at one time or another been covered by water and there is “real” evidence that some areas have been submerged at least 20 separate times.

It is a mistake to assume that a rise in the average global sea level translates to a net loss in coastal land. Per a 2016 study published in the journal Nature, the earth gained a net total of 5,000 square miles of coastal land area from 1985 to 2015.

Man-made global warming is a hoax that threatens our future and the future of our children. Environmentalism is the new communism.

“The new religion of global warming…. Is a great story, and a phenomenal best seller. It contains a grain of truth and a mountain of nonsense. And that nonsense could be very damaging indeed. We appear to have entered a new age of unreason, which threatens to be as economically harmful as it is profoundly disquieting. It is from this, above all, that we really need to save the planet.” Mikhail Gorbachev, “A Special Report: The Wildlands Project Unleashes It’s War On Mankind,” 1996

Source: The Nation of Kiribati Is Growing, Not Sinking, By James D. Agresti, Just Facts; The sinking state – This is what happens when climate change forces an entire country to seek higher ground, Washington Post

1 comment for “Never Underestimate the Greed of the Ruling Elite”