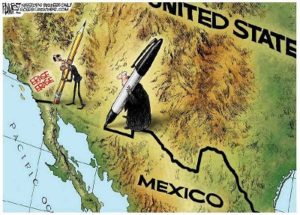 The border between the United States and Mexico stretches for 1,960 miles, parting two major regions of the world with vastly different governments, standards of living, and levels of crime.

From 2013 to 2015, the U.S. Border Patrol recorded a yearly average of 700,000 illegals crossing the Southern border. That is in addition to the roughly one million people a  year who legally enter and around 100 million who legally visit.  Of those here on a temporary VISA, an estimated 300,000 illegally overstay their welcome, often never leaving, setting illegal immigration at a minimum of 1 million a year.

People who illegally cross our border avoid criminal background checks and, as a result, have a much higher serious crime rate than legal immigrants and the general U.S. population as whole.  Highlighting the impact of this, a U.S. Government Accountability Office study of 249,000 non-citizens in U.S. prisons and jails during 2003 to 2009 found that they had been arrested for 2.9 million offenses committed within the U.S., offenses that included 69,929 sex offenses and 25,064 homicides.   Like most government data, this study did not isolate legal non-citizens from illegals, but given that legal immigrants have to undergo criminal background checks, the vast majority of prisoners were more than likely in the U.S. illegally.

Let’s look at just one state as an example.  A report from the Arizona State prison system from 1985 to 2017 documented that illegals were at least 142% more likely to be convicted of a crime than other Arizonans. They also tend to commit more serious crimes,  serve 10.5% longer sentences,  are more likely to be classified as dangerous, and 45% more likely to be gang members than U.S. citizens.   If illegals committed crime nationally as they do in Arizona, they would have been responsible for over 1,000 more murders nationally,  – 5,200 more rapes  – 8,900 more robberies,  -25,300 more aggravated assaults and  -26,900 more burglaries.

Mexico is the primary source of heroin in the United States.  During 2015, around 830,000 persons over the age of 12 admitted to using heroine.  From 2015 to 2016, heroin overdose death rates increased by 19.5%.  The actual figure may be significantly higher, because the CDC  notes that fatal heroin overdoses are “under-counted by as much as 30 percent” due to inconsistent reporting and difficulties associated with determining the presence of heroin in the bodies of the deceased.   The nonprofit Hudson Institute estimated the amount of pure heroin produced in Mexico in 2015 rose 67% over the 2014 numbers, and 170% over the estimates for 2013. Officials from both Mexico and the United States estimated at least a 50% jump in production in 2014, according to the New York Times.

And let’s not forget the terrorists.  The Texas State Department of Public Safety reports that border agents have apprehended several members of known Islamist terrorist organizations crossing the southern border in recent years which included several Somali immigrants who are known members of al-Shabab,  and another Somalia based group once funded by Osama bin Laden.  The report also said agents had come into contact with “special interest aliens,” who come from countries with known ties to terrorists or where terrorist groups thrive.  Those arrested include Afghans, Iranians, Iraqis, Syrians, Libyans and Pakistanis. In all, immigrants from 35 countries in Asia and the Middle East have been arrested over the past few years in the Rio Grande Valley.

Throughout Trump’s presidential campaign, he repeatedly promised to reduce drug trafficking and violent crimes by illegal by securing the southern border.  His primary idea—to build a wall along much of the border—became his signature pledge.  When questioned during a primary debate about whether this plan was realistic, Trump stated, “They built the Great Wall of China. That’s 13,000 miles. Here, we actually only need 1,000 because we have natural barriers.”

In 2015, hundreds of thousands of refugees from the Middle East and Africa were illegally entering Hungary to seek asylum in Western Europe.  In response, the Hungarian government constructed a barbed wire fence along its border with Croatia. Within two days of completion, according to data from the Hungarian police, illegals attempting to cross their border decreased by 99% and stayed at that level through the rest of the year.

A surge of terrorism prompted Israel to rapidly begin constructing a multilayer system of fences and walls known as the “West Bank Barrier” in 2002. Almost immediately, the number of Israeli civilians killed by Palestinians in Israel began plummeting and has stayed at greatly reduced levels ever since.  In 2010 they constructed a wall along their border with Egypt to stem the uncontrolled flow of illegal immigrants from Africa.

The left-wing attacks against Trump and against a border wall are not grounded in objective reality.  Far from being outdated and useless, border barriers are a modern and seemingly effective means to curtail illegal immigration, and lessen border crime.   The mounting evidence surrounding border barriers suggests that they accomplish their goals.

← If Liberals Were Animals, it Would be an Improvement
Time to Remove Socialist “Huddled Masses” Plaque from Statue of Liberty →