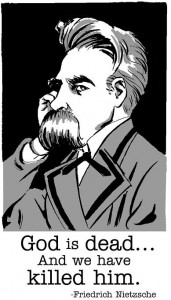 Secularists and Socialists have been trying to kill Christianity since the turn of the century.

Friedrich Wilhelm Nietzsche a German philosopher from the 19th century coined the phrase, “the death of God”.  Not that Nietzsche  believed in an actual God who first existed and then died in a literal sense.  It was just Nietzsche’s way of saying that the conventional Christian God is no longer a viable source of any absolute moral principles.  “When one gives up the Christian faith, one pulls the right to Christian morality out from under one’s feet.”  By breaking one main concept out of Christianity, the faith in God, one breaks the whole. . .” Nietzsche also started a campaign against the establishment of moral systems based on what he called a “dichotomy of good and evil”, a “calamitous error.” He wanted to initiate a   re-evaluation of the values of the Judeo-Christian world.

Prior to WWI, the social movement was the religious wing of the progressive [socialist] movement.  The social gospel, a Protestant Christian intellectual movement,  preached by liberals such as Walter Rauschenbusch and Washington Gladden  attempted to apply Christian ethics to social problems such as injustice and inequality.  Today, this movement is still influential in many mainline Protestant denominations such as the Evangelical Lutheran, the Presbyterian (USA), the United Church of Christ, the Disciples of Christ, the Episcopal, and the United Methodist Churches.

Liberals saw the social gospel as a niche for their form of Christianity.  They felt it was their obligation to stand up for those with no voice and provide for those who could not, or would not,  help themselves.  An admirable trait for Christians!  Unfortunately, much as today, the purveyors of the social gospel  put emphasis on God’s Kingdom on earth and as such believed that they had the responsibility to transform society.  While they believed that individual salvation was important, it became secondary to social reform where the Church and the government, rather than God, would bring society to salvation.    They justified their ideology by distorting Biblical texts to convince the masses that Christ taught socialism.

The social gospel stands hand-in-hand with the collective salvation movement that is taught in many Churches today – new age, globalism, collectivism, it takes a Village, God’s Kingdom on earth, etc.  Collective salvation is a quasi-contract religious concept, a mandate of social justice projecting rights not normally given through the laws of our nation, based on man’s doctrine – not God’s.  Although they may claim Christ as the basis of their beliefs, they believe there are many other paths to salvation and stress that only through the collective action of society becoming one in equality and by overturning the past sins of society and the pillages of the environment, can true salvation be attained.

A Time Magazine cover in 1996, asked the rhetorical question, “Is God Dead Yet?”  Unfortunately, in many churches, he is – replaced with the doctrine of Marxism.   People of the “me generation” tend to gravitate towards groups in society where the numbers are the largest – man likes to hang out with the popular crowd!      Churches have become nothing more than social clubs where the “theology of the day” is taught.

There is no justification to believe that the socialist agenda taught by many mainline denominations and espoused by the likes of Hillary Clinton, Obama, and numerous other progressive Democrats and Republicans,  is Christianity.  Even Friedrich Engels, co-author of  “The Communist Manifesto,” said “. . .if some few passages of the Bible may be favorable to Communism, the general spirit of its doctrines is, nevertheless, totally opposed to it. . .”

Marxism pushes the doctrine of victimization and once you see yourself as a victim, you have opened yourself to socialism and greed.  Marx built his philosophy on the initial premise that God was “a human delusion” and that Christianity was nothing more than an “opiate of the masses.”

Progressive and social gospel leaders insist that socialism is the most caring system ever conceived, an antidote to poverty and the only true foundation for an equitable society.   But, if you place socialist ideology next to the Word of God, socialism loses.  Nowhere in the Bible does God command the government to take money from its citizens and redistribute it to the people.   God gives us three ways to take care of the poor and needy – family, Church, and charity.  The American welfare state is anti-Christian and unbiblical.  God condemns the politics of envy and greed and extols the virtues of hard work and capitalism.

The National Council of Churches commissioned researcher Dean M. Kelley in the early 1970’s to find out why liberal churches were in decline.  According to Kelley, “amid the current neglect and hostility toward organized religion in general the conservative churches, holding to seemingly outmoded theology and making strict demands on their members, have equaled or surpassed in growth the early percentage increases of the nation’s population.”  Speaking for mainline Protestantism Kelly assumed that churches “if they ever wanted to succeed will be reasonable, rational, courteous, responsible, restrained, and receptive to outside criticism“ and would be highly concerned with “preserving a good image in the world”, meaning within the world of the cultural elites.  He also noted that these churches would tend to be cooperative with other religious groups to meet common goals and thus “will not let dogmatism, judgmental moralism, or obsessions with cultic purity stand in the way of such cooperation and service.”    Kelley then surmised that “these expectations are a recipe for the failure of the religious enterprise, and arise from a mistaken view of what success in religion is and how it should be fostered and measured.”

Those churches that were growing, according to Kelley, were those conservative churches with “strong” religious movements that made demands on their members in terms of belief and behavior, churches that adhered to defined doctrines that were taught, received, and believed, without compromise.   Liberal churches are opposed to these very principles.  They lowed doctrinal and behavioral requirements and made membership more a matter of personal preference than of conviction.

David Brooks, a New York Times columnists wrote that “many religious doctrines are rigid and out of touch.  But religion itself can do enormous good as long as people take religious teaching metaphorically and not literally; as long as people understand that all religions ultimately preach love and service underneath their superficial particulars; as long as people practice their faiths open-mindedly and are tolerant of different beliefs.”

Brooks was right, at least where it concerned  the mainline Protestant aspiration – to be seen as serving without the taint of theological judgment.  But then he had another thought.  “The religions that thrive have communal theologies, doctrines and codes of conduct rooted in claims of absolute truth, that allow people to build their character.  Regular acts of discipline can lay the foundation for extraordinary acts of self-control when it counts the most.”

What Kelley and Brooks both discovered was that in the end, socialism based religion can not deal with the most important question of all – the truth,  a Biblical commitment to hold fast to the truth rooted  firmly in the Word of God.

1 comment for “GOD IS DEAD AND WE KILLED HIM”