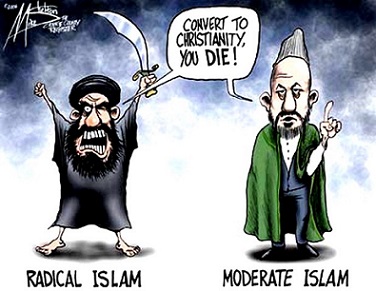 If Islam is part of the curriculum in your child’s school, and it probably is, you can be almost certain that it is treated in a deferential fashion. If your child’s school uses prepackaged materials that look as though they were vetted by a committee of Muslim apologists, they probably were. And if you notice that your boy or girl is practicing Arabic calligraphy, don’t worry – they are just writing that “there is no God but Allah, and Muhammad is his messenger.”

And even if your child attends a Catholic school your children are not safe because the school run interference for Islam. Your second-grader might be reading My Muslim Friend, a Pauline Press book that depicts Muslims as more devout than most Catholics. Your high school student, meanwhile, will learn that Islam gently “expanded” into neighboring territories, when, in fact, Islamic forces ruthlessly conquered them. What he or she won’t hear is anything critical of this religion of peace. For example, in the Orlando diocese, a sixth-grade teacher was fired for providing students with a printout of St. John Bosco’s negative assessment of Islam. Why? Well, because, as an associate superintendent put it, “the information provided … is not consistent with the teachings of the Catholic Church.”

If your child is in college, it will be more of the same – more indoctrination about Islam’s peaceful nature, its many contributions to the arts and to science, and the victimization of its followers at the hands of Christian imperialists.  If he or she happens to be enrolled at Oregon State University, he or she will be asked not to eat in “shared spaces” during Ramadan to avoid offending Muslims.  Some Catholic high schools and colleges even have special prayer rooms set aside for Muslim students. For example, St. Ambrose University in Iowa recently opened a sex-segregated prayer room for Muslim students complete with sinks for ritual foot-washing.

Islamic indoctrination in public and Catholic schools is far more extensive than you might think. But don’t feel bad if all this is news to you. Adults who don’t have children in school don’t usually keep tabs on what goes on inside school buildings. And even parents with children still in school generally don’t know the details of the curriculum. Much of what happens in school is terra incognita for parents.

But, unless you’re from a distant planet, you’ve already figured out that the educational establishment in American is composed in large part of left-wing liberal ideologues. These are the same people who are hell bent on sexualizing our children without our knowledge, who indoctrinate our children in subjective morality, recreational sex, gay marriage, transgenderism. It was the schools, not the courts, which paved the way in the destruction of sexual norms. So it shouldn’t come as a surprise that the same people who sexualized our children now have no qualms about Islamizing them.

The leftist elites don’t care if Islamization spells the end of our culture. That’s what they want! So please be aware that the steady incremental Islamization of our children will proceed with little opposition because most parents can’t imagine or don’t care that their local schools cooperate in advancing the Islamic agenda while belittling Western Christian heritage. For many parents, the first indication that something is wrong will come when, at some future point, their daughter returns from school wearing the mandatory hijab.

Schools are arguably the chief facilitators of Islamization in America under the guise of multicultural studies and anti-bullying curricula which teaches your child a whitewashed version of Islam that will leave them unprepared to recognize or resist stealth jihad when they grow older.

A 2004 report by Harvard researcher, Sandra Stotsky, and a 2005 four part investigative report by the Jewish Telegraphic Agency, revealed that after 9/11, the Saudi government ramped up efforts to introduce Islamic friendly materials into K-12 schools in the U.S. to promote Islam while criticize Judaism and Christianity.  A series of investigations in 2014 by the London Telegraph revealed that “there was indeed an organized group of Muslim teachers, education consultants, school governors, and activists dedicated to furthering what one of them describes as an ‘Islamizing agenda’ in Birmingham schools.” In short, the paper had uncovered a broad-based conspiracy by Muslims to take over the schools in a major English city. The plot, to which the conspirators gave the rather obvious code name “Trojan Horse,” involved removing secular head teachers and replacing them with radical Muslim staff, segregating classrooms by putting girls in the back, and introducing Islamic prayers.

It is by stealth that Islam plans to destroy America. Unfortunately, it doesn’t take too much stealth to fool people who have been taught to believe that Islam means peace while the left provides camouflage.

No matter how many soldiers we send to fight in the Middle-East, the main battle in the clash of civilizations is being waged in America’s classrooms.

Source: Islamization in the Schools by William Kilpatrick, Crisis Magazine

← How Will The Beast Unite The Entire World To Follow Him?
Whom the gods Wish to Con, They First Make Illiterate →