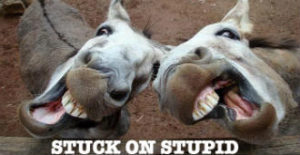 Mary Margaret Penrose, professor at Texas A&M at an symposium on gun control and the Second Amendment bragged  that she tells her constitutional law students that the entire U.S. Constitution is an obsolete document.

According to Penrose we have no need of a 2nd Amendment in an outdated constitution driven by 18th century fears of a standing army.

There are times when the word “stupid” or one with the meaning it conveys, is indispensable.  This is especially true when academics abuse the assumption of learning their credentials convey in order to get away with making absurd statements about matters seriously important to the safety and happiness of the society in which they live.

In a democratic society, attitudes that become popular or “trendy” can be used to ease slipshod thinking past the rational defenses of even quite intelligent people.  Consider the comical arrogance of a phrase like “that’s so twentieth century.”  Applied to styles of dress, or cell phones, it’s passably amusing.  But would we say the same about a mathematics professor who routinely dismissed questions about the different proofs for Pascal’s 350 year-old hexagon theorem by saying “that’s so 17th century”?

Professor Penrose’s case reminds us that when discussing laws and politics people often invoke an objective standard, if only in the context of the particulars of an ongoing debate.   Take gun control for example.  Its advocates cite every tragic episode in which guns are involved.  They quote statistics about gun-related deaths.  They speak as if the number of deaths is due to a “lack” of gun  laws and is relevant evidence of the need for  gun-control laws.

Our founding fathers knew of the atrocity associated with the abuse of unchecked government powers that killed at least tens of thousands of people, leading them to treat the need for “government-control” as one of the permanent problems confronting people charged with devising the fundamental law for a society’s institutions of government (constitution).  As Madison wrote [Federalist 51] “In framing a government that is to be administered by men over men, the great difficulty lies in this: you must first enable the government to control the governed, and in the next place oblige it to control itself.”

The answer is so obvious that failure to take account of it indicates purposeful deception, or a definite “lack of ability to learn and understand things” [stupidity].  The notion that the underlying concerns of the Framers is archaic or obsolete is thus absurd.   People can pretend that humanity has passed beyond the motives of religious fanaticism that ambitious rulers promoted as the excuse for 17th century atrocities.  But Americans know first hand, from our experience with violent Islamic jihadists, that this is nonsense.

Unless we’re out to prove just how stupid we are, we can’t take as coincidental that the people most likely to pretend that gun-related episodes demand gun-control laws are also the ones most likely to ignore the government-related mass murders.

We can’t ignore the increasing resort to government coercion in the name of “gay rights” or access to abortion, in pursuit of a religiously ideological vendetta against certain Christian moral ideas and practices.   The main difference between the 18th century and the 21st century is the vastly improved armory of noxious instruments governments have at their disposal for inflicting massive death and fatal misery on people.

This hardly seems like the right time to embrace the whimsical stupidity of pretentious, self-serving pseudo-intellectuals  when they declare or imply that the 2nd Amendment is no longer needed.

You can read Alan Keyes article in full at this link.