Obama, his administration, and Socialist Democrats today are repeating history, but instead of the corruption being isolated to one county, they have taken it nationwide. 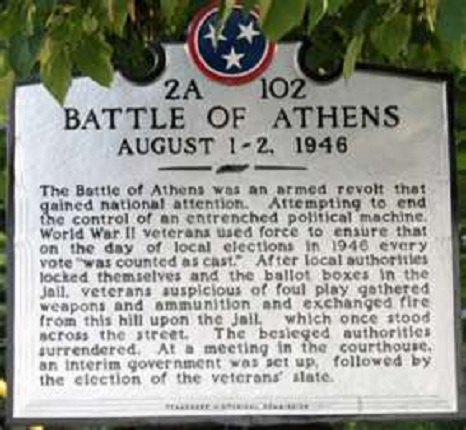 McMinn County, Tennessee. In the 1930’s the wealthy Cantrell family took control and essentially the county. The Cantrell’s were supporters of the Democrats’ New Deal. Corruption thrived.

The sheriff and his deputies received a cut of the money for every person they booked, incarcerated, and released; the more arrests, the more money they made. Often, buses passing through the county were pulled over and the passengers were randomly ticketed for drunkenness, whether guilty or not.

Bribes were accepted, voters were intimidated, ballot boxes were tampered with and citizens who dared speak out were beaten.

The citizens complained about the political corruption and voter fraud to the FBI and the U.S. Department of Justice, but their complaints went unanswered.

After WWll ended, 3,000 veterans (10 percent of the county’s population) returned home. Some challenged Cantrell’s political control by fielding their own nonpartisan candidates and working for a fraud-free election.

Combat veteran Knox Henry stood as candidate for sheriff in opposition to Cantrell. In advertisements and speeches the GI candidates promised an honest ballot count and reform of county government.

“The principles that we fought for in this past war do not exist in McMinn County. We fought for democracy because we believe in democracy but not the form we live under in this county”.

August 1, 1946, the election was held. To intimidate voters, some 200 armed “deputies were brought in. GI poll-watchers were beaten almost at once and Tom Gillespie, an African-American voter, was told by a Sheriff’s deputy, “Nig*er, you can’t vote here today!”.  Gillespie was beaten and then shot in the back. Other deputies detained the veteran poll-watchers in the polling place; but when the ex-GI’s escaped, the ballot boxes were moved to the jail.

These patriotic Americans’ absolute refusal to knuckle-under to tyranny. Having fought to free other countries from murderous regimes, they rejected vicious abuse by their county government.

The citizens had no choice. Acquiring keys to the National Guard and State Guard Armories, the citizens armed themselves and headed for the jail where the ballot box had been illegally taken.

It took the courage of citizens to restore the RULE OF LAW.

“Gun control” opens the door for Tyrannical Dictators such as Obama, Hillary Clinton, and Bernie Sanders. For us to remain a free Nation, we must restore the RULE OF LAW.

A well regulated Militia, being necessary to the security of a free State, the right of the people to keep and bear Arms, shall not be infringed.

“Firearms stand next in importance to the constitution itself. They are the American people’s liberty teeth and keystone under independence … from the hour the Pilgrims landed to the present day, events, occurences and tendencies prove that to ensure peace security and happiness, the rifle and pistol are equally indispensable … the very atmosphere of firearms anywhere restrains evil interference — they deserve a place of honor with all that’s good.” George Washington

“Those who hammer their guns into plowshares will plow for those who do not.” Thomas Jefferson

“The greatest danger to American freedom is a government that ignores the Constitution.” Thomas Jefferson

← Israel – America – Isaiah and God’s Judgment – A Nation Dedicated To God
Where Do We Draw The Line? →