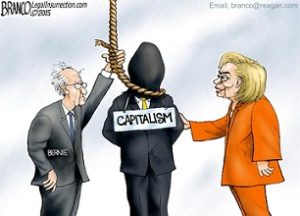 The polar ice caps are melting, hurricanes are ravishing the planet, the earth’s population is threatened by catastrophic climate change, millions of American jobs have been sent overseas and aren’t coming back, the oceans are rising, and millions of species are going extinct and the only thing that can save us is Socialism.

If you believe all that nonsense you’re going to love the 2014 “life-enhancing” socialist nonsense called Imagine Living in a Socialist USA, a 281 page promotion of a new society that promises life in a true and just world.  The book showcases 31 “utopian” essays written by dangerous criminals, prominent progressives, socialists and communists.

Authors include such upstanding citizens as Bill Ayers, Obama’s supporter, mentor and friend whom he claimed to barely know; Michael Moore the man who hates everything American; Mumia Abu Jamal, a cop killer and communist activist Angela Davis. It’s a perfect fit for the fiction section of your personal library.

Here, are some of the most extreme and famous among this group of radicals and left-wing journalists:

Joel Kovel Demands Revolution to Kill the Capitalist ‘Cancer’ This anti-Semitic invokes environmental  hysteria over issues like global warming as well as calling for “all working men of all countries to unite” to remake society from the ground up in the service of life.  Socialism, Kovel  claims, would foster a society where humans will organize their economy in accordance with environmental demands [and all live without electricity, money,  cars, and jobs].

Cop-Killer and Former Fugitive Mumia Abu-Jamal joined with  Angela Davis, former leader of the U.S. Communist Party, to write a little ditty advocating the  End of Prisons.   Abu-Jamal was convicted in 1982 of shooting Philadelphia Police Officer Daniel Faulkner in the back.  Davis, for her part,  was implicated in a 1970 courtroom shootout, though she was found not-guilty after spending 3 months on the run. Soviet leader Leonid Brezhnev awarded her the Lenin Peace Price in 1979.

These two radicals advocate nothing less than the complete dismantling of the prison system that would “end mass incarceration by prison abolition.”  While you may be wondering what they think would suffice to stop crime, they advocate a system which “brings the offender and the victim together to talk to each other.”  Yes, by all means,  let’s force victims to engage in dialogue with their attackers.

Bill Ayers, founding member of the openly communist Weather Underground  and admitted bomber, claims American Nationalized Schooling a Failure of Capitalism.  True to his communist background, Ayers advocates a radical change to America’s education system to eliminate the “laborious programs of sorting the crowd into winners and losers through testing and punishment, grading, assessing and judging.”  For Ayers, education has become a capitalist organization which has less to offer “an inquiring mind” than the “city dump” or “a street corner.” The problem, he says, is that capitalism encourages us to “think of education as a product like a car or a refrigerator.” He supports completely dismantling the education system in favor of a poorly defined system without grades that focuses on “full human development, enlightenment, and freedom,” while totally ignoring the fact that government forced the current education system on the states. He blames the state of our educational system on billionaires who call for reform.

Paul Le Blanc Explains How America is Ready for Revolution.  Le Blanc, a historian at La Roche College, pens that a contemporary socialist revolution would fit nicely into the revolutionary history of the U.S., as he compares the American Revolution and Civil War as times when “progressive” forces destroyed unjust power structures. “Many U.S. socialists have argued that we must undertake a third American revolution that would end the economic dictatorship of capitalism and establish rule by the people over our economy  [stealing what you have to line liberals’ pockets].”

Michael Moore  hopes for an unstoppable Rebels Without A Clue [OWS] while  promoting hardline leftist legislation, Agenda 21, confiscatory taxes, and a massive welfare state.  All of which the left are working hard to achieve.

Keep voting the same old Democratic progressives back in office and these people may well get their wish!