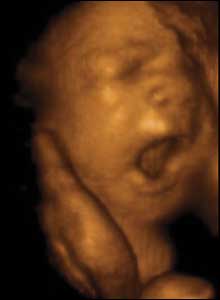 “I deplore the horrible crime of child murder. . .No matter what the motive, love of ease or a desire to save from suffering the unborn innocent, the woman is awfully guilty who commits the deed.  Guilty?  Yes. . .It will burden her conscience in life, it will burden her soul in death!”  Susan B. Anthony

Susan B. Anthony played a pivotal role in the 19th century women’s rights movement.  She introduced women’s suffrage into the U.S. at a time when women were not even allowed to vote.  Yet, she viewed abortion as a means of exploiting both women and children.

None of the early feminists believed that abortion was a woman’s right.  On the contrary, they believed that women’s equality would end abortion for good.   Elizabeth Cady Stanton, whose  Declaration of Sentiments  is credited with initiating the struggle towards women’s suffrage in the U.S. wrote in a letter to a supporter in 1873: “When we consider that women are treated as property, it is degrading to women that we should treat our children as property to be disposed of as we see fit.”

British writer Mary Wollstonecraft who stated in her feminist classic  A Vindication of the Rights of Women  in 1792 wrote:  Women. . .sacrificing to lasciviousness the parental affection. . .either destroy the embryo in the womb, or cast if off when born.  Nature in everything demands respect and those who violate her laws seldom violate them with impunity.”

These statements by early feminists stand in stark contrast to so-called feminist of today.   Kate Michelman, former president of NARAL writes: “We have to remind people that abortion is the guarantor of a woman’s right to participate fully in the social and political life of society.”  Kate Hindell and Madelaine Simms believe that abortion is a fundamental right of the woman and employ sham science to contend that the fetus is merely a part of the woman’s body and not yet human and can be destroyed like a tumor.

These lies come even while Dr. Alfred Bongioanni, professor of obstetrics at the University of Pennsylvania says that from his earliest medical education he learned that “human life is present throughout the entire sequence from conception to adulthood” and “any interruption at any point throughout this time constitutes a termination of human life.  I am no more prepared to say that these early stages represent an incomplete human being than I would be to say that the child prior to the dramatic effects of puberty is not a human being.  This is human life at every stage.”

These “pro-choice” advocates always overlook the victim’s right to choose.  A woman’s “right to choose” ignores the fact that not all choices are legitimate or morally valid.  When someone opposes a “right” to things such as rape or child abuse, she is not opposing a right – she is opposing a wrong.  By contract, every movement of oppression and exploitation from slavery, to prostitution, to drug dealing, to abortion, has labelled itself pro-choice.

The pro-choice movement is actually a pro-abortion movement in which “choice” is basically a euphemism for the killing of the unborn child.  Legal scholar  Erika Bachiochi, who grew up absorbing feminist philosophy explained that she was “pro-choice” only because she was a feminist.  Her “pursuit of truth” began to replace her “pursuit of self” when she reconsidered her thinking and began to understand that abortion diminishes the humanity, femininity and well-being of women.  “abortion hijacked feminism.  Rather than elevate the status of the feminine virtue. . .and teach the power of serving as a true feminism ought, mainstream feminism, having allowed itself to be corrupted by the abortion imperative, taught women to place ambitions and desires of the self above those in need, and to value power more than truth and love.. . .”

Environmentalist Rosemary Bottcher, in her essay, Feminism: Bewitched by Abortion contends that mainstream feminism has degraded women by portraying them as unable to handle the stress and pressures of pregnancy without resorting to killing their children.  “Such feminism opposes all the efforts to require that abortion be treated like every other surgery when it comes to informing the patient of its nature and risks because it appears not to believe that women are capable of making intelligent choices. . .”

Many will say that abortion might be justified when a woman’s life or health is threatened by pregnancy.  Former US Surgeon General, Dr. C. Everett Koop stated that in his 36 years as a pediatric surgeon he was never aware of a single situation in which an unborn child’s life had to be taken in order to save the mother’s life and described the use of such argument to “justify abortion as a smoking screen.”  Another medical surgeon, Dr. Landrum Shettles, said that less than 1% of all abortions are performed to save the mother’s life.

If one has the “right” to eliminate pre-natal life, then one might well eventually acquire a similar “right” to take post-natal life of other “categories” of human beings.  Surely the next logical step following widespread abortion is the devaluation of human life in general, the denial of basic human rights to other categories of human beings.

Any society that tolerates the mass extermination of unborn children has ceased to be truly civilized.  One of the most visible signs of moral decadence of the Roman Empire was that unwanted babies were either killed or left abandoned to die.

“Can we claim that contemporary western society is any less decadent because it consigns its unwanted babies to the hospital incinerator instead of the local rubbish dump?  Indeed modern abortion is even worse than ancient exposure because it has been commercialized and has become, at least for some doctors and clinics, an extremely lucrative practice.  But reverence for human life is an indisputable characteristic of a humane and civilized society.” John Stott, British Theologian

← Radicalized Christians
Socialism Is Theft – Why Are Candidates Espousing It? →