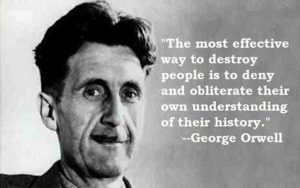 “There is nothing new in the story. It is as old as the sibylline books. It falls into that long, dismal catalogue of the fruitlessness of experience and the confirmed unteachability of mankind.   Want of foresight, unwillingness to act when action would be simple and effective, lack of clear thinking, confusion of counsel until the emergency comes, until self-preservation strikes its jarring gong–these are the features which constitute the endless repetition of history.” Winston Churchill, House of Commons, 2 May 1935.

Ancient cultures devoted much time and effort into teaching their children family history because it gave them a basis of understanding of who they were.  Modern society, however, has turned its back on the past. We live in a time of rapid change, a time of progress. We prefer to define ourselves in terms of where we are going, not where we come from so our ancestors hold no importance for us.   Our ancestors lived in times so different from our own that they are incapable of shedding light on our experience. Man is so much smarter now than he was even ten years ago that anything from the past is outdated and irrelevant to us. Therefore the past, even the relatively recent past, is, in the minds of most of us, enshrouded by mists and only very vaguely perceived. Our ignorance of the past is not the result of a lack of information, but of indifference. We no longer believe that history matters.

History does matter. It teaches values. If it is true history, it teaches true values; if it is pseudo-history, it teaches false values.  There is a war in American universities against true history, a deliberate politicization of history curriculum pushed by those who would rewrite America’s history to fit their own agenda. So it should come as no surprise that many young Americans not only don’t know the history of this country but are antagonistic toward any history that puts America in a good light.

For over a decade associate professor of English at the University of Wisconsin James Pesta has been asking university students their opinions on Western culture and American values. In one survey students defined capitalism as “greedy,” “selfish” and “unfair,” while 83% defined socialism as “fairness” and “equality,” reflecting ignorance of how Socialism has played out historically.  In another survey students described Andrew Jackson as a slaveholder rather than president of the U.S. They believe that slavery began in the U.S. almost exclusively as an American phenomenon, an error so drastic that it reveals that they have a very narrow and very specific kind of indoctrination. Slavery is, after all, as old as the human race and it was the British and the American people who spearheaded the abolition of slavery. Slavery still continues to this very day in Islamic countries.

According to professor Pesta, before the new millennium, students were historically ignorant but not politicized’ now, however, they possess a “sense of moral superiority in not knowing anything about our ‘racists’ and ‘sexists’ history and our ‘biased’ institutions.” They have been indoctrinated into the “evils” of the free market system, the “wickedness” of our Founding Fathers.” They know nothing about the history of Marxism and Communism over the last century.   The fruits of this attitude is evident in the age of microaggressions . While knowing nothing about the Founding Fathers, probably the most brilliant and moral men in American political and intellectual history, they denounce these men and the constitutional form of government they created. Is it any wonder we are witnessing a lawless generation?

FEC data shows that the vast majority of teachers donate to the Democratic Party, ratios of which suggest a near complete ideological uniformity. While teachers, just like all other Americans, have the right to support the party of their choice, their donations, along with the left tilting nature of the teacher’s unions, show that something much larger is at work, something that is bringing these teachers’ liberal and socialist beliefs into the classroom and the minds of their students.

Once the New Left grabbed control of the teacher’s unions and gained seats of power within the Democratic Party, they adopted Adolph Hitler’s mantra: “Youth belong to us and we will yield them to no one. To Hitler, education was a means to an end – the corruption of the nation’s youth to his left-wing ideology. Everything was taught with the Nazi slant, twisted to show the power of Germany and the inferiority of the Jews. The major goal of knowledge became indoctrination, synonymous with the Nazi agenda. Truth became something that was created to serve the interest of his political party.  Propaganda was almost literally drilled into young people from the age of five and six up. Hitler’s Youth created a generation that only embodied characteristics that were compatible with Nazism but assured the passage of these characteristics to future generations.

America stands at the most pivotal point in her history. We are polarized – we are factionionalized. Out history has been rewritten to minimize the importance of our Judeo-Christian foundation. Our institutions have been purged of morality….Our language is adulterated with vulgarities….Our youth have been hijacked by power that redefines family and strip them of any faith in God….That’s Marx by the way. It’s also most of the leadership in the current Democratic Party, unions, our educational system, and the media and yes, it’s beginning to take roots in the Republican ranks as well.

As Winston Churchill so aptly reminded us – “History is written by the victors.”  Whether it be aristocracy, royalty, oppressive regimes or a slew of other tyrants, humans have been time after time been fed fabricated lies to suit the agenda of these parties.

Source:  The Crisis of Angry Ignorance by Abraham Blondeau; The Importance of History by David Crabtree

← Socialism Is Theft – Why Are Candidates Espousing It?
The Truth About Slavery →