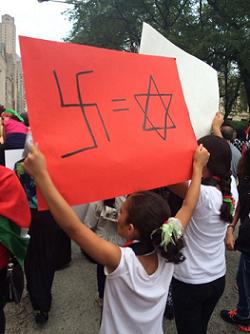 “Anti-Semitism is the purveyor of weaker minds. It takes much effort to understand history and its complexities and that is simply too much for many to employ. It is much easier to fall back on conspiratorial beliefs that are simplistic. There is no quantitative difference between a leftist siding with Hamas and demanding the boycott of Israel today than a Polish peasant cheering the passage of trains full of Jews on their way to Auschwitz.”  Scott Kirwin, The Razor

In the Muslim world anti-Semitism is justified by the Koran’s curse upon the Jews for having allegedly slain the prophets and transgression against the will of Allah. This motif is coupled to Koranic verses that describe the Jews’ transformation into apes and swine, creatures that were cursed by the tongue of David and by Jesus. This insult should not be dismissed as a mere vulgar invective nor should the belief that Jews were transmogrified into apes, pigs or other creatures be seen merely as a sign of primitive magical thinking. Repeated reference to Jews as despised beats dehumanizes them and provided justification for their destruction.

Non-Muslims subjected to Islamic rule usually had a choice between death and conversion, but Jews and Christians, who adhered to their beliefs were usually allowed as dhimmis to practice their faith, but as a dhimmis, an infidel, they were forced to acknowledge the superiority of the Muslim faith and pay a blood ransom tax. Under Islam rule, entire Jewish communities were slaughtered, children abducted for harems and those that could pay the blood ransom tax were treated as chattel to perform the most degrading of tasks from the early 9th century up until their mass exodus in 1948.

Anti-Semitism led to the creation in 1928 of the Muslim Brotherhood, Obama’s designated “moderate” terrorist organization that founded Hamas and al-Qaeda. This was also the era that saw the rise of the Palestinian Arab Movement founded by Hajj Amin el-Husseini, appointed in 1921 by the British as Mufti of Jerusalem. Throughout his “career” Hajj relied upon traditional Koranic anti-Jewish themes to inflame Muslims to slaughter the Jews.

With Hitler’s ascent in the 1930s, Hajj intensified his anti-Semitic activities to secure support from Hitler, Bosnian Muslims and the Arab Muslim world for a jihad to annihilate the Jews of Palestine. In 1941 Hajj attempted and failed to install a pro-Nazi government in Iraq and had to spend most of WWII in Germany and Italy where he continued to provide support for Hitler by recruiting Bosnian Muslims for dedicated Nazi SS units for Hitler’s campaign of genocide against the Jews.

Since 1927 when it was translated into Arabic, The Protocols of the Elders of Zion has been used frequently in anti-Jewish discourse in the Arab world to back up claims that there is a Jewish plot to take over the world. Hitler read it and required it to be taught in German classrooms.  Originally published between 1897 and 1903 in Russia by an unknown author, the Protocol is an early example of conspiracy theory literature. It is one of the best known examples of literary forgery with proof of its fraudulent origin going back to 1921. Yet when quoted in the Muslim world (and in some American circles) it is referred to as unquestionably authentic.

The most common trend today that the Muslim world employs is to equate Zionism with Nazism and push the lie that Zionist collaborated with the Nazis to annihilate the Jewish people. Despite all the information and identification of the 9/11 terrorists, officials, journalists and religious leaders throughout the Arab and Muslim world still claim that the attacks were carried out by American and Jewish elements, much like some nutty conspiracy theorists in the U.S.  And there are those who still deny the Holocaust .

There are also a number of anti-Semitic groups in the United States, such as the Aryan-White Resistance, the KKK, the American Nazis, and gangs of skinheads along with several fundamentalist churches such as the Westboro Baptist Church, who preach anti-Semitic messages, along with left-wing university professors who degrade the Nation of Israel.

In the first half of 20th century, Jews in the U.S. were discriminated against in employment, not allowed into some social clubs and resort areas, given a quota on enrollment at colleges, and not allowed to buy certain properties. Anti-Semitism reached its peak during the interwar period with the rise of the KKK, the ranting of Henry Ford, and the radio speeches of Father Coughlin in the late 1930s. Henry Ford, a pacifist, accused Jews of starting wars to profit from them and even published portions of the Protocol of the Elders of Zion in his paper, The Dearborn Independent.

During the Holocaust, anti-Semitism was a prevalent attitude in the US and Europe. During the years before Pearl Harbor, over a hundred anti-Semitic organizations were responsible for pumping hate propaganda throughout the U.S. resulting in gangs that vandalized Jewish cemeteries and synagogues and attacks on Jewish youngsters.   In 1944, a public opinion poll showed that a quarter of Americans still regarded Jews as a “menace.”

At the height of Hitler’s atrocities many Jews died needlessly because Roosevelt and his State Department totally ignored their plight and, in some cases, even helped Hitler along by refusing to open up our borders, thus sending thousands back to their deaths in the camps. Was this born out of anti-Semitism? Or plain indifference? In the end, is there any distinction?

According to a new study there are 1.09 billion anti-Semites in the world today, 70% of which have never met a Jew. These are bigots who believe Jews are greedy, unethical manipulators who control the world and cause everything bad: 9/11 – Financial crises – Communism – Dyspepsia – You name it.

Jew-hatred cannot be understood as simply another instance of everyday prejudice. It has genocidal potential.

“Whether religious or racial, anti-Semitism is always repugnant, one of the most destructive manifestations of human stupidity and evil. What is profoundly expressed in it is man’s traditional mistrust of the man who is not part of his tribe, that ‘other’ who speaks a different language, whose skin is a different color, and who participates in mysterious rites and rituals.”  Mario Vargas Llosa

Sources: What Is Arab Anti-Semitism? by the Middle East Media Research Institute; Arab/Muslim Anti-Semitism, by DiscovertheNetwork.org; Anti-Semitism and American History (pdf) by Jonathan D. Sarna; and A Hoax of Hate by the Jewish Virtual Library