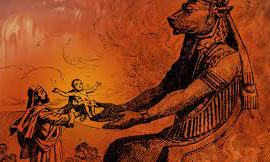 “As thou knowest not what is the way of the spirit, nor how the bones do grow in the womb of her that is with child; even so thou knowest not the works of God who maketh all.” Ecclesiastes 11:5

Pro-lifers have been bombarded by the secular left in an attempt to prove that God is in agreement with the slaughter of our children. Planned Parenthood went so far as to enlist a left-wing “clergy advisory board” in an attempt to convince the world that they are doing “God’s work.” Dr. Willie Parker, an abortionist who claims to be a Christian, made similar claims in his book Life’s Work: A Moral Argument for Choice. Parker’s version of Christianity is that women should be allowed and even encouraged to sacrifice their unborn babies to better their own life.

This is, of course, not a new argument.  Back in 2012 Huffington Post argued that pro-lifers were falsely using Scripture to convince people that abortion was murder. “The Bible…based on a literal reading, does not recognize a fetus as a full human life subject to the same rights as a birthed person….Not a single verse, yet the anti-abortion movement continues to declare, in the name of God, that abortion is murder. It seems that God left out the prohibition of abortion or perhaps does not consider a fetus a full human life…”

Yes it is true, the Bible does not mention the word abortion but then it also doesn’t mention guns or cars either, both of which can and have been used as instruments of death. There are many ways to take the life of another human being that are not mentioned in the Bible. But does that make the act of murder less of a sin?

The scrolls of ancient scripture clearly defend the sanctity of life. “Behold, all souls are mine” sayeth the Lord in Ezekiel 18:4. He set mankind above all of his earthly creations. “Let us make man in our image, after our likeness and let him have dominion over the fish…over the fowl…over the cattle…and over all the earth. So God created man in His own image, in the image of God created he him; male and female…” Genesis 1:26-27.

The term “with child” appears twenty-six times in the Bible. Nowhere will you read “with blob of cells or with fetus.” Exodus 21:22-23 tells us that if a man hurt a pregnant woman so that she loses the baby, he must be punished – a life for a life. Proverbs 6:16-17 tells us that God hates those who shed innocent blood. You can’t get more innocent than a baby.

We read of the struggle of twins in Rebekah’s womb in Genesis 25:22-23. “The Lord said unto her two nations are in thy womb, and two manner of people shall be separated from thy bowels; and the one people shall be stronger than the other people; and the elder shall serve the younger.”

Psalms 22, which Jesus taught while on the cross, in verse 10 we read, “I was cast upon thee from the womb: thou art my God from my mother’s belly.” In Jeremiah 1:5 we read that “Before I formed thee in the belly, I knew thee and before thou camest forth out of the womb I sanctified thee and I ordained thee a prophet unto the nations.”

When Mary conceived of the Holy Spirit she rushed to tell her cousin Elizabeth what had happened. We read in Luke 1:41-42 that when Elizabeth heard the news John the Baptist leapt in her womb, and she was filled with the Holy Spirit. “Blessed art thou among women and blessed is the fruit of thy womb. “ In Isaiah 49:1 we read, “…The Lord hath called me from the womb, from the bowels of my mother hath he made mention of my name…”

If murder is not a sin, why did God give us the 6th Commandment (Exodus 20:13)? “Thou Shall Not Kill.” The Hebrew word translated kill in the KJV is ratsach meaning to dash to pieces, to murder. Christ confirms this in Matthew 19:18 when he taught “Thou Shalt Do No Murder….” The Greek word for murder is phoneuo meaning to be a murderer. Even today, while the precise legal definition of murder varies by jurisdiction, common law dictates that murder is the taking of another life with malice aforethought (intent). To be guilty of First Degree murder requires willful, deliberate premeditation.  I can safely say that abortion fits very nicely within that definition.

Scripture repeatedly condemns the murder of children. When the nation of Israel was ready to enter the promised land God told them not to mingle with the heathen nations, not to share in their idol worship, not to sacrifice their children.  In Psalms 106:35-38 we learn that Israel not only did not destroy the heathen nations as God commanded, they chose instead to “shed the innocent blood, even the blood of their sons and daughters, whom they sacrificed unto the idols of Canaan and the land was polluted with blood.”  “Thou shalt not let any of thy seed pass through the fire to Molech….” (Lev. 18:21).  “…Whosoever be of the children of Israel, or of the strangers…that giveth any of his seed unto Molech, he shall surely be put to death…” (Lev 20:2).  This sin of child sacrifice is mentioned as one of the major reasons why God allowed the Nation to be taken into captivity. 2Kings 17:17-18 and Jeremiah 19:5-15.

It all comes back to the fact that a child in the womb is a human being. Murder is the deliberate premediated taking of an innocent life therefore, abortion is murder.

“When the dust of history settles, abortion will come to be seen for what it is: one of the most barbaric horrors of complacency in history—easily surpassing events such as the Holocaust in sheer magnitude of the number of those killed.” By Dr. Tony Garland

← Exactly How Stupid Do You Have To Be?
According to This Idiot, the U.S. is Completely at Fault →