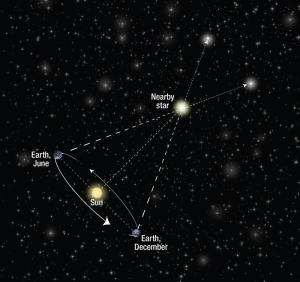 you build a scientific philosophy based upon an assumption,  you are bound to get  conclusions that conflict with your supposed truths.

Astronomers have known about the Methuselah star, more formally known as HD 140283, for over 100 years.  Evolutionists  made the assumption that the star was originally formed in a dwarf galaxy that was gobbled up by  the Milky Way over 12 billion years ago.

In the case of the Methuselah star, Howard Bond and a team of researchers  from Pennsylvania State University and the Space Telescope Science Institute in  Baltimore, re-analyzed all of the data in order to come up with a new date to fit their agenda.  They  took the assumed distance to the star along with its brightness, composition and  structure to formulate a new and possibly closer date for what they believe to  be the oldest star in the universe.  “Put all of those ingredients together, and you get an age of 14.5 billion  years, with the residual uncertainty that makes the star’s age compatible with  the age of the universe.”

Bond’s uncertainty figure actually equates to an error factor of ± 5.5%.  You could also say that his fudge factor covers a total of 11%,  which I was always taught was unacceptable.  If I had turned in one of my  biology studies or experiments with a ± 5.5% error factor, it would have been  rejected and I would have been told to get my figures straight.  But when it comes to making your data barely fit into the possible evolutionary paradigm, hey, what’s 11% here or there.

Now mind you, if you got into a debate with any evolutionists who accept  Bond’s work, they’ll tell you that this is fact. What they won’t tell you is their fact is always subject to drastic changes like reducing the age the Methuselah star from 16 billion years to 14.4 billion year, a change of over 9%  with an additional 5.5% leeway all because it can’t possibly be older than their supposed age of the universe.

Another thing they won’t admit is that they really can’t explain the Big Bang or what really existed before it went  bang or how long that existed and so on.  In order to be a good  evolutionary astronomer, you have a take a class in the use of  vague terms like:    maybe, we think,  I believe, possibly, around, close to, perhaps, could be,  etc.  The next time you read an astronomy paper, watch for the  ‘fudge factor’ words that allows them to alter  their interpretation of   data  any way that suits their needs at any given time.

2 comments for “The Methuselah Star”