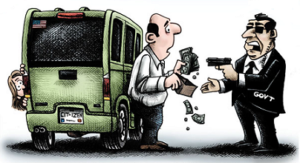 “When plunder becomes a way of life for a group of men living together in society, they create for themselves, in the course of time, a legal system that authorizes it and a moral code that glorifies it.”  Frederic Bastiat – 1850

According to Thomas Jefferson, the purpose of government is to enable the people of a nation to live in safety and happiness.  Government only exists solely for the governed, not for the governors. Our founding fathers believed that the very nature of  government was  for the support, protection, and defense of  man’s inherent divine rights –  life, liberty, and property.

Samuel Adams wrote that “if men, through fear, fraud, or mistake, should in terms renounce or give up any essential natural right, the eternal law of reason and the grand end of society would absolutely vacate such renunciation.  The right to freedom being the gift of God Almighty, it is not in the power of man to alienate this gift and voluntarily become a slave.”

There is no other place on earth with  the degree of individual liberty that the United States has  and that is due to the limitations placed on the government in our Constitution so that government would exist solely to serve the people, not enslave them. Our  rights were not granted by the Constitution –  our God-given rights are  guaranteed by the Constitution and it is governments job to protect those rights from both foreign and domestic enemies.

The Constitution, with its Bill of Rights, is not a code of laws for the people,  it is not a set of inspirational thoughts about how government should act,  it is the law that guides how government must act.   Any law the federal government passes, any order the president issues, any decision a federal court may make, must fall within the limits of the Constitution, which cannot be changed merely by a vote of Congress or waived by a presidential edit.

Our Constitution is a legally binding contract between two parties –  the American people and the people they elect to represent them in government.  It is a binding contract that must be protected by the states and enforced by the courts.

When the Constitution is violated – when it is corrupted by the very people who swore an oath to uphold it – our entire system of governance, of laws, and of justice is corrupted.

In 1848  Frederic Bastiat  wrote that  “The hundred thousand mouths of the press and of the platform cry out all at once –  Organize labor and workmen, repress insolence and the tyranny of capital,  make experiments upon manure and eggs, cover the country with railways, irrigate the plains, plant the hills, make model farms, found social workshops, nurture children, instruct the youth, assist the aged, send the inhabitants of towns into the country, equalize the profits of all trades, lend money without interest to all who wish to borrow, emancipate oppressed people everywhere, rear and perfect the saddle-horse, encourage the arts, and provide us musicians, painters, and architects,  restrict commerce, and at the same time create a merchant navy, discover truth, and put a grain of reason into our heads.”

The mission of Government, he writes “is to enlighten, to develop, to extend, to fortify, to spiritualize, and to sanctify the soul of the people. . .we should all of us have within our reach an inexhaustible source of wealth and enlightenment – a universal physician, an unlimited treasure, and an infallible counselor. . .I will venture to say that I fear we are, in this respect, the dupes of one of the strangest illusions which have even taken possession of the human mind.”

He goes on to write that  “Government cannot satisfy one party without adding to the labor of the others, and  until I can obtain another definition of the word Government I feel authorized to give it my own. Who knows but it may obtain the prize? Here it is: “Government is the great fiction through which everybody endeavors to live at the expense of everybody else.”

Former Virginia Attorney General Ken Cuccinelli, in his book , The Last Line of Defense, created an analogy he refers to as the liberty pie to illustrate the relationship between the individual and government.   Every single thing that government does  to increase its own power increases the size of its slice of the liberty pie and since there are only two slices, every time government’s slice grows, the citizens’ slice is reduced.   Today, the government has grown so powerful that it no longer asks us to willingly give it more power – it takes what power it wants!

“As we reflect upon our founding principles in light of the wasteful regulatory state that our federal government has since become, we must ask ourselves, do we still believe that life, liberty, and property are universal God-given rights that government is bound to preserve? Do we hold these truths to be self-evident today? For the sake of our future, let the answer be yes.”   Brian Vanyo

← Katie Hill Affair and its Aftermath are Signs of America’s Decline
Dead End at Bernie’s: Sanders Will Never be President →