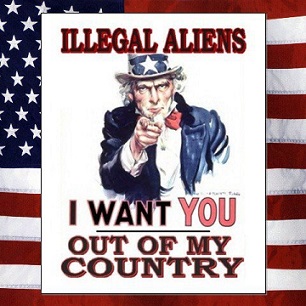 The left has been trying for years to purge the English language of the term “illegal alien.” They have tried “undocumented immigrant” then went straight to simply “immigrant” and even attempted “new American.” It looks like that hard work has paid off because “illegal alien” is now considered a racial slur, which is ridiculous as it sounds.

The Applied Research Center, a far left-wing “racial justice” think tank, wants us to believe the word illegal is fueled by those evil white people to promote anti-immigration sentiments and encourage fear and division. I don’t know about you but I detect a tad bit of racism on their part!

The left loves citing racism as evidence of how unjust and immoral White America is because it’s easier to divide the nation than it is to offer solutions to rectify the problems their policies have created.

In 2010 the Diversity Committee of the Society of Professional Journalists called on the drive-by media entertainers to replace illegal immigrant and illegal alien with undocumented worker or undocumented immigrant, arguing that the usual terms are “offensive” to Latinos. The CEO of Garcia Trujillo, a strategy firm that works with Hispanic-owned companies prefers the term economic refugee because illegal alien has the connotation of someone being subhuman.

Shahid Haque-Hausrath, a Pakistan-American Muslim, of the Montana-based Border Crossing Law Firm, wrote on the firm’s website that illegal alien “implies that a person’s existence is criminal . . . [It] has been used to dehumanize immigrants and divorce ourselves from thinking of them as human beings.”

It’s weird how language works sometimes. Did you know a Guinea Pig is neither a pig nor from the Republic of Guinea? Or that a peanut is neither a pea nor a nut? Illegal immigrant isn’t a technocratic legal term, it’s a widely accepted phrase that describes something we all understand quite well. Illegal is not a racial slur. You are either in this country legally or you’re not. If you broke the law, slipped in under the fence, snuck in on a slow boat from China, or simply overstayed your visa, you are in this country illegally, no matter your color or nation of origin. As for morally wrong, the left doesn’t give a tinkers damn who they use to steal elections and bankrupt the country. One illegal is as good as the other.

Pedro Gonzalez, assistant editor of American Greatness writes that “placing legal immigrants and illegal aliens – even criminals – in the same column based on minority status alone has become a loathsome cornerstone of progressive policy. It’s not hard to see how this is counterproductive. Well-intentioned though it may be, the reality is that progressives are cultivating – rather than discouraging – animus for law-abiding immigrants, because the lines between the lawful and the unlawful have been blotted out.”

Matt Walsh, in his article It’s Ok that Illegals Murder Americans, As Long As They Vote for Democrats, writes that nations that care about their culture, their future, and the safety of their citizens treat immigration with the sort of rigorous, mature, serious scrutiny it requires. But in this country, which is apparently being run by preschoolers in Velcro shoes, we toss law, order, rationality, borders, national security, human life, truth, and assimilation to the side on the grounds that the murderer sorting through your garbage might have happy dreams. The fact that he’s dreaming about getting high and “accidentally” slaughtering women is not relevant.

The left has intentionally created a perverse system of incentives that makes it very attractive to people all over the world to do whatever they can to hitch a ride on “the gravy train” and take advantage of all of the benefits that they possibly can. And once these illegals get on welfare, many of them never leave. A study in 2012 discovered that 43% of all immigrants who have been in the United States for at least 20 years were still on welfare. We can’t even take care of our own citizens, and yet more immigrants hop on to the safety net every single day.

Every year, illegal immigrants receive tens of billions of dollars in welfare payments. They get free food assistance, free housing assistance, free health care benefits and free education, benefits that are denied to many taxpaying Americans.

According to U.S. law, it is a crime to enter the United States without permission. The first offense is a misdemeanor; the second however is a felony. While it is true that most violations of immigration law are dealt with in civil court in order to speed up the process of deportation, an immigration judge acts as an adjudicator under authority of the Department of Justice’s Executive Office for Immigration Review to determine whether or not an individual is deportable under U.S. Law. This procedure should not be interpreted as an indication that illegal immigration is not a criminal violation.

Because illegal aliens are not U.S. citizens, they are not entitled to the full panoply of rights and privileges under the Constitution as are citizens. Thus, they can be held subject to a non-judicial ruling instead of a jury trial for their criminal violation of immigration law.

National sovereignty is part of the authority God has delegated to civil authorities. Whatever the immigration laws of a particular nation, determining the policies of how many immigrants to admit and the terms and conditions applying to immigrants, is the prerogative of the national body. Each society may set or change its nation’s immigration laws. Those decisions rest within the society, and outsiders have no legitimate voice in that exercise of national sovereignty..

Those who object to the use of the term “illegal alien” appear to believe that if they can convince the American public that illegal immigration is not really illegal, then amnesty no longer is amnesty, and enforcing immigration law is unnecessary.” Eric A. Ruark