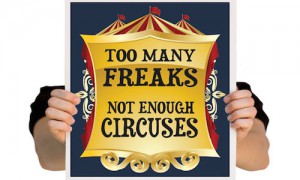 Times may be changing but the principles and values I was taught as a child have stayed with me.

And because of those values, I’ve had enough of partisan politics and politicians working to line their own pockets.  I’m tired of election promises made with fingers crossed.  I’m even more upset that lying has become an accepted part of everyday life.

I’m tired of state and federal masters who believe they have the authority to decide what I may do or say, or what I can eat, smoke or drink, for that matter. I’m especially sick and tired of politicians and so-called personalities that employ armed guards but want to deny me the right to protect myself and my family.

I’m tired of the far-left wing nuts who demand that peasants obey laws they ignore; who treat the Constitution as a suggestion; who attempt to overthrow a duly elected president because he successfully rejuvenated the U.S. economy after eight years of leftist rule.

I’m tired of the left’s  “It Takes a Village” mindset that would rather indoctrinate our children into the joys of homosexuality, Islam, socialism, global warming, abortion and atheism rather than actually educating them.  I am tired of regulations that destroy our economy and cost jobs for some socialist agenda that does nothing but damage the country in order that a few cronies, scientists, dictators, tyrants and  lobbyists can line his or her pocket.

I am tired of people being perpetually offended. I’m tired of being called racist because I refuse to be excited about illegal aliens sneaking into our country.  Illegal is illegal!  What part of that gets lost on the left, the media or the bleeding heart liberals?  I’m tired of illegal aliens being called “undocumented workers,” especially the ones who aren’t working, but are living off welfare or crime, or both.  What’s next? Calling drug dealers, Undocumented Pharmacists”?

I’m tired of being told that in our modern culture family, morals and values no longer matter.   America was founded on Christian principles and if you want that to change, count me out. I don’t give a damn about your new ideas. If that offends you, get a life!

I’m tired of political agendas that favor radical Islam over Christianity.   I am tired of people believing I have to apologize for being Christian. If God doesn’t exist why get your panties in a wad? Do us both a favor – Tell a Muslim that his religion is wrong and see what happens!

I’m tired of being told that out of “tolerance for other cultures” we allow  Muslim countries to fund mosques and Islamic schools to preach hate in America,  while no American group is allowed to fund a church, synagogue, or religious school in Muslim countries to teach love and tolerance.

I’m tired of being brow beaten because your ancestor were slaves. So were mine once or twice in their history and you don’t hear me whining. Even if my distant ancestors did own slaves that doesn’t make me guilty.  I can personally assure you that I never owned another human being nor do I know anyone who has.   The first slaveholder in America was a black man and the slaves were rounded up by blacks in Africa and sold to him by Muslims. Ask those people for reparations.

I’m tired of the left attempting to justify the murder of innocent babies as a right under our Constitution and using my tax money to support the murderer.

I’m tired of the left trying to make me feel guilty for being white, especially since I had no control over my race. I don’t feel guilty, nor do I have a reason to feel guilty, so get over it!

I’m tired of being told how bad America is by left-wing millionaires like Michael Moore, George Soros, Bloomberg, Hollywood entertainers and rich sports figures who live in luxury because of the opportunities America offers. In thirty years, if they get their way, the United States will have the economy of Zimbabwe, the freedom of the press of China, the crime and violence of Mexico, the tolerance for Christian people of Iran, and the freedom of speech of Venezuela.  Won’t multiculturalism be beautiful?

I’m tired of being told that Islam is a “Religion of Peace,” when every day I  read dozens of stories of Muslim men killing their sisters, wives and daughters for family honor; of Muslims rioting over some slight offense; of Muslims murdering Christian and Jews because they aren’t “believers”; of Muslims burning schools for girls; of Muslims stoning teenage rape victims to death for “adultery”; of Muslims mutilating the genitals of little girls; all in the name of Allah.

It is time for every American, regardless of race, to stand up and tell those worthless lying politicians who believe they are above the law that there will be a day of reckoning.

Source: I’m Tired by Robert A. Hall and Enough…I’m tired and You Should Well be Too, Independent Sentinel

← Joker: Propaganda for a revolution against everything
A Timeless Warning from William F. Buckley, Jr. →