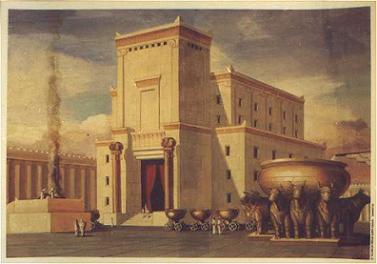 If it were not for the visible world in which we live, God would be nothing to us.  It is through the visible creation that the invisible God becomes a reality to man. God is not in one place more than another, but man must be made to feel that He is somewhere before they realize that He is everywhere.

The Temple of Solomon, the House of God, was the most wonderful building constructed by human hands. The Temple was built through God’s plans to answer man’s need of a sacred place of worship.

The House of God used architecture to convey spiritual truths.  Each detail of the Temple’s construction, from the foundation to the roof, embodied a symbolism, in forms, to teach men spiritual truths.  Each holy vessel, garment and covering, every substance, its texture, color, sound or odor – everything pertaining to sensory perception was symbolic of some particular aspect of Messianic truth proclaimed for the edification of mankind.

The mountains of Lebanon provided the major source of cedar for the Temple’s construction.  Growing to a height of over one hundred and fifty feet, cedars of Lebanon (cedrus libani) were regarded as the stateliest of trees (I Kings 4:33) and symbols of strength and power. (Psalm 92:12).  They were the most sought after and highly prized trees in the ancient world.

The Temple was a simple house of two rooms, arranged lengthwise with a roofed porch protecting the entrance.  The interior size is given as 60 cubits long, 20 cubits wide and 30 cubits high.   Beyond the porch or portico was the main room known as the “Holy Place” and beyond that was the “Holy of Holies,” a room in the shape of a cube, 20 cubits in each dimension.  Taking all of the parts together, the exterior ground-plan of the Temple measured 80 cubits by 40; that of the Tabernacle measured 40 x 20.  The walls were 20 cubits high in one and 20 cubits high in the other.  By doubling all the measurements, then multiplying length by width by height, we obtain the volume of the Temple which is eightfold greater than that of the Tabernacle.  Eight is the biblical number symbolic of new beginnings.

The stones used in the construction were quarried under the city of Jerusalem.  One of these quarries was rediscovered accidentally by an American physician, Dr. Barclay, in 1854.  In order to provide a courtyard for the Temple, walls were built up from the sides of the mountains, and inside them, all spaces were filled with earth.  At the northeast corner of the Temple area, the wall extends 110 feet below the present ground level.  At the southeast corner, walls extend down 79 feet to bed rock and rises 77 feet above the ground.  The foundation corner-stone at the southeast corner was found by archaeologists to measure 14 feet long and nearly 4 feet high.

The Bible abounds in interesting allusions to the corner-stone.  The Prophet Isaiah, when speaking of the kingdom of God to be established under the new dispensation, exclaims, “Behold I lay in Zion for a foundation a stone, a tried stone, a precious corner store, a sure foundation.” (Is 28:16).  The corner-stone, the foundation upon which Solomon’s Temple is built symbolizes the Truth upon which a man builds his spiritual house; the true Temple of God.

The stones symbolizes the Spiritual Temple of God.  In allegory, each man is a master builder.  As he builds his own body through which he must function, he is erecting a spiritual house.  This work must be done of our own free will yet it must be under the direction of the “Master Builder.” (I Cor 3:16, 17 and Eph 2:22)

Among the structural architecture and decoration of Solomon’s Temple, none have exerted more interests than the two pillars Solomon named Yachin and Boaz. (II Chronicles 3:17).  Yachin in Hebrew meaning “He shall establish” and Boaz meaning “in it is strength.”     On top of the two pillars were  chapiters that served as braziers for the burning of incense or oil.   It is an established fact that in Solomon’s day, named pillars served as perpetual witnesses to solemn covenants, indicating that these two pillars may well have represented the two covenants God made with David, one to establish David’s throne forever (11 Sam 7:16), and the other to plant His  people in a place of safety  (II Sam 7:10).

The Holy Place was a spacious room about 60 x 30 x 45 feet high.  The interior walls were covered with panels of cedar wood carvings, consisting of cherubims, palm trees and flowers inlaid with gold.  Palm trees were considered the “tree of life” because they lived so long and bore so much fruit.  The carvings of flowers were the egg-shaped gourds and rosettes common in Solomon’s time.  Relics such as the Altar of Burnt Incense, the Table of Shewbread and ten 7 branched lampstands were kept in The Holy Place.

The lampstands  stand for the divine presence – “I am the light of the world: he that followeth me shall not walk in darkness, but shall have the light of life;” (John 8:12) “the Lamb is the light thereof” (Rev 21:23);  “In him was life; and the life was the light of men. And the light shineth in darkness; and the darkness comprehended it not.”(Jon 1:4,5).

The Table of Shewbread held the twelve loaves of bread known as the “Bread of the Presence,” which the Priests brought fresh into the Holy Place each Sabbath.  This offering was required to be continually in the presence of the Lord. (Ex 25:30)  The twelve loaves represented the twelve tribes, who were to be, in a mystical sense, like our Lord, the “Bread of Life.” (John 6:35)  Christ referred to himself as the “true bread from heaven.” (John 6:31-35).

In addition to the twelve loaves, there stood the vessels of wine to typify the body and blood of Christ, so offered by our Lord at the Last Supper.   Each Sabbath, the priests partook of the sacrament.   As a side note: Sabbath does not mean Sunday or any other day of the week.  All Hebrew Sabbaths were on fixed days of the month.  The days were not named, they were numbered.  And, besides the regular Sabbath, Israel had many Feast days (Sabbaths), Fast days (Sabbaths)  and annual Sabbaths.

The Altar of Incense was a limestone altar with horns inlaid with gold.  Offering of incense, a compound of gums and spices,  was a very sacred rite. (Lev 16:12,13 and Numbers 16:46-48).  The fragrance of incense was symbolic of the prayers of the faithful ascending to God.

The Holy of Holies was the inner Sanctuary, the receptacle for the Ark of the Covenant.  It was the place of God’s throne (Ez 43:7).  The Day of Atonement was the one day in the whole year when the High Priest could enter, wearing only pure white linen seeking atonement for himself and the people.  Atonement was accomplished by the offering of blood and sprinkling it before the Mercy Seat (Ark).   Hebrews 10:19 confirms the inner Sanctuary as symbolic of the redemption wrought by Christ; Hebrews 8:5  and  9:24 confirms that the Holy of Holies was only a copy or “shadow” of heaven.

The Ark of the Covenant was a small wooden box made of acacia wood (Ex 25:10-22)  about 45″ by 27″ by 27″ overlaid with gold.  It had a dished lid and golden rings, one at each of its four corners, to hold two porter poles.  During the wilderness years the poles were never removed from the Ark indicating that any resting place of the Ark, during the 40 years of wandering was temporary.  The two Cherubim’s placed on top of the Ark were symbolic of the arch angles that guarded the mercy seat.  We learn in Ezekiel 28:14 that before his fall, one  of these Cherubs was Satan.

The Ark was the symbolic seat of Yahveh’s authority in the Most Holy Place.  The Manna and Aaron’s budded rod deposited therein during the wilderness period depicted the true “Bread of Life” who would come down from Heaven; the true “High Priest.”  Through the foreknowledge that this symbolism would be fulfilled in Christ, in the True Tabernacle, those items were not continued in the Temple of Solomon. (I Kings 8:9) The Ten Commandments spoken by God himself to the people representing  God’s core guidelines for a  spiritual and moral life, were the only things left in the Ark. (I King 8:9))

The Altar of Burnt Offerings,  stood in the court  on the right side of the Temple.  On the blaze atop the Altar, the priest put parts of sacrificial animals.  These sacrifices were never meant to cover sin; they were a prophetic allegory to the one “sacrifice acceptable” (Christ) whereby sin itself is covered.  (Phil 4:18 and Heb 9:28)

At the dedication of the Temple, Solomon like David before him, recognized the extent of the power and majesty of the Lord.  In his prayer to God, Solomon referred to both individual and national shortcomings and called upon the Lord to forgive when His people became willing to conform with the requirements which would bring about the answer to their prayers. (I Kings 8:22-45)  So effective was Solomon’s supplication for God’s mercy that fire came down from heaven to consume their sacrifices and the Glory of the Lord filled the Temple.

II Chronicles 7:12-14 it is written “And the Lord appeared to Solomon by night, and said unto him, I have heard thy prayer. . .If I shut heaven that there by no rain, or if I command the locust to devour the land, or if I send pestilence among my people; if my people, which are called by my name, shall humble themselves and pray, and seek my face, and turn from their wicked ways; then will I hear from heaven, and will forgive their sins and heal their land.”

Source:  King Solomon’s Temple: A Study of Its Symbolism by E. Raymond Capt., M.A., The Archaeological Institute of America

← Guns Save Lives.. but not in Democrat Controlled Cities
Second-Amendment Setup: What They Say Isn’t What You Get →