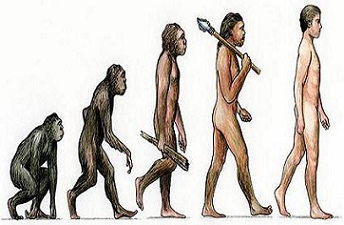 Evolution, when applied to explaining the origins of man,  was and still is a racist idea.

Note the picture used in this article taken from the Smithsonian Magazine article “The Top Ten Daily Consequences of Having Evolved” – did you notice that the transitional hominid (second from the right)  looks like a modern African while the final man is white?  The message being that the lighter the skin the more evolved the man.

Charles Darwin thought that certain groups of dark-skinned people were closer to apes than their white counterpart and those who embraced Darwin’s “Theory” of Evolution were upper-class European men who thought of themselves as the top of the chain in evolutionary terms.

In a documentary “The Voyage that Shook the World”, Historian Peter Bowler said “that by the time he [Darwin] writes the “Descent of Man” in 1871, it’s pretty clear that he, by that time, shares the growing suspicion or conviction of many Europeans –  The non-white races simply do not have the capacity to be elevated properly into civilized human beings  – that they are mentally and morally at a more limited level.  In a sense, they are stuck at an early stage in the biological evolution of the human species.”

Darwin’s “Theory” has had devastating consequences for black and mixed skin tone races around the world.  Early Darwinists even suggested that Australian Aborigines might be the missing link and many were killed to be put on display in science museums around the world.  Charles Kingsley, a friend of Darwin  and a Darwinist in his own right,  said that “the black people of Australia, exactly the same race as the African Negro, cannot take in the gospel. . .All attempts to bring them knowledge of the true God have as yet failed utterly. . .Poor brutes in human shape. . .they must perish off the face of the earth like brute beasts.”

Darwin’s Evolution is essentially based on a “theory”, not scientific fact,  of survival of the fittest.  An individual (animal) would  acquire unique traits that enable them to survive adverse conditions.  These superior individuals would be more likely to survive and pass on these unique traits to their offspring while the weaker would eventually die off.   If every member of a species were fully equal, natural selection would have nothing to select from and evolution would crease for that species.     It was this Darwinian thinking that underpinned the most basic feature of the Nazi legal order and theory.  Nazis saw themselves as progressive people who were acting on behalf of evolutionary science, reason and progress.  Darwin’s notion of struggle for survival justified the racists concept of  superior and inferior peoples or nations and validated the conflict between them.

The first step in the eugenie program was to determine which groups were genetically superior and then it was easy to determine the inferior.  Working under the theory that humans could control and even use Darwinism to produce a higher level of human,  and believing themselves to be the biologically superior community,   Hitler argued that governments must understand and apply the ‘laws of nature’, especially survival of the fittest which originally produced the human races. Darwinism, eugenics and the result  – anti-semitism – was a lethal combination.   “It was essential that  the Jews be segregated. . .to establish an evolutionary higher state of being.”  Mein Kamp

“Just as in cancer the best treatment is to eradicate the parasitic growth as quickly as possible, the eugenic defense against the dysgenic social effects of afflicted subpopulations is of necessity limited to equally drastic measures. . .when these inferior elements are not eliminated from a [healthy] population. . .they destroy the host body as well as themselves.”  Konrad Lorenz, German Animal Behavior Scientists

The experience of Nazi Germany has important lessons for us today – crucial for the preservation of our human freedom and happiness.  “Adolph Hitler and the Nazi regime are the perfect illustration of what can occur when a civil government declares itself to be completely independent of God’s law.” Augusto Zimmerman

Margaret Sanger, one of many Eugenicists in America, founder of Planned Parenthood,  taught racial supremacy and purity of the Aryan race, seeking to contain the “inferior” races through segregation, sterilization, birth control and abortion.  Read:  The Negro Project: Margaret Sanger’s Eugenic Plan for Black Americans.  Darwinism had a profound influence on her thinking, including her conversion to eugenics.

Evolutionary theory still soundly endorses the idea that humans evolved from apes. Some scientists and laymen still claim  that human and chimp DNA are around 98% similar as proof of ape to human evolution, even though this has been proven to be a myth.   But can we say for certain that Darwinism leads to racism.  Liberals and proponents of evolution will argue that there is no correlation between the two.

Darwin was a racists!   Did his racism lead to the Theory of Evolution or did the “Theory” lead to his racism?