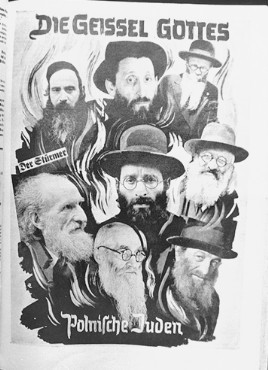 Apathy and evil. The two work hand in hand. They are the same, really…. Evil wills it. Apathy allows it. Evil hates the innocent and the defenseless most of all. Apathy doesn’t care as long as it’s not personally inconvenienced.”   Jake Thoene

In today’s educational system we may read about the Nazis and the Holocaust but the evilness is never fully conveyed, if conveyed at all.  As a matter of fact there are nations within Europe today who are still denying their participation in this horror.  While I was lucky to have gone to school at a time when history was actually taught nothing could bring the horror of this period forth more than watching a documentary of the atrocities committed against a race of people whose only crime was to be born Jewish. To this very day it is hard for me to imagine how  people who called themselves Christians could allow or participate in something so incredibly evil.

It  is a horrid event in history that Americans must never forget, brought on by an evil man obsessed  by a vision of how he thought  the world should be.  Look around you – Hitler has come to America in the form of abortion, euthanasia, assisted suicide and yes, even anti-Semitism.

Researchers from the United States Holocaust Memorial Museum have concluded that over 40,000 Nazi camps and ghettos existed between 1933 to 1945.  The documented camps included not only “killing centers” but also thousands of forced labor camps where prisoners manufactured war supplies;  prisoner-of-war camps; sites euphemistically named “care” centers where pregnant women were forced to have abortions or their babies were killed after birth; and brothels, where women were coerced into having sex with German military personnel.

Over the years, many scholars have worked to uncover the lost or unknown victims of the Holocaust, insisting that the death toll is higher than claimed.  The number of Jews killed is often listed at around 6 million, but  Father Patrick Desbois told the London Times in 2009 that after years of investigating mass graves in Ukraine, he felt the death toll should be revised upward.  The lead editors on the project, Geoffrey Megargee and Martin Dean, estimate that 15 to 20 million people died or were imprisoned in the sites that they have identified.

In 1933, at the start of Hitler’s reign, the Third Reich established about 110 camps specifically designed to imprison some 10,000 political opponents and other “enemies of the state.”    As Germany invaded and began occupying European neighbors, the use of camps and ghettos was expanded to confine and sometimes kill not only Jews but also homosexuals, Gypsies, Poles, Russians and many other ethnic groups in Eastern Europe. The camps and ghettos varied enormously in their mission, organization and size, depending on the Nazis’ needs.

Hitler didn’t operate in a vacuum. Unlike  America, Europe was historically and officially anti-Semitic.  While American certainly had and still has many anti-Semitics, it was never governmentally sanctioned, it was never de jure, legal.

George Washington along with the majority of our Founders were almost philo-Semitic.  Washington made the point of sending a remarkable letter to the congregants of the Truro Synagogue in Rhode Island, the first and the largest in America, assuring them  that ‘the children of Abraham’ would be welcome to live in America in peace as full citizens.  He was telling them they need not fear the political change would result in their having to pull up stakes again.

To give you an idea of how remarkable Washington’s letter of assurance  was at that time, Jews had only been allowed to live in Britain since 1656, when Oliver Cromwell readmitted them after they had been expelled from England in the 13th Century.  Even then, Jews were not allowed to serve in Parliament or in government positions until 1829.  Jews were not legally allowed to live in Sweden until 1715, Norway until 1850, and not allowed for many years per se in Spain, Portugal, or any of their colonies in Africa or the New World after the expulsion of 1492.   In places like the German states,  Poland and Russia, their status was marginal and subject to the whims of whomever was in power.   So George Washington’s letter was a very big deal.  It defined the entire relationship between Jews and the American Republic.

A lot of anti-semitism in Europe came courtesy of the Catholic Church and Martin Luther, whose history was somewhat like Mohammad’s, believe it or not.  In the beginning, Luther said a great deal about tolerance and used the Church’s anti-semitism as a talking point against them, figuring that the Jews would come flocking in to become Lutherans and Protestants.  But, like Mohammad, when most of the Jews said no thank you, he became one of the most violent anti-Semites in history.

When Hitler rose to power, anti-semitism was an established mainstream threat  in  Europe.  There was no secret as to what was going on in Germany during the 1930’s but frankly, the people who gave a damn were in the minority. . .and that was by no means limited to Germans.  Few countries would give German Jews visas to emigrate unless they had influential friends or were someone like Einstein who might prove useful.   That included America, by the way.

Avowed anti-Semites  were major public figures.  The Ivy League had strict quotas on admitting Jews and many neighborhoods, clubs and even hotels boasted covenants that barred Jews.   During the era of the Holocaust, the American press did not always publicize reports of Nazi atrocities in full or with prominent placement. For example, the New York Times, the nation’s leading newspaper, generally deemphasized the murder of the Jews in its news coverage. As the magnitude of anti-Jewish violence increased in 1939-1941, many American newspapers ran descriptions of German shooting operations, first in Poland and later after the invasion of the Soviet Union. The ethnic identity of the victims was not always made clear. Some reports described German mass murder operations with the word “extermination.” As early as July 2, 1942, the New York Times reported on the operations of the killing center in Chelmno  based on sources from the Polish underground. The article, however, appeared on page six of the newspaper.   In November 1942, the U.S. State Department confirmed the existence of extermination camps and the murder of 2 million Jews.  The New York Times carried this report on page 10.

The U.S. State Department, then as now, had a decent quotient of anti-Semites and delayed and avoided issuing visas to Jews fleeing Germany even when they were available, although there were some Americans who risked quite a lot in order to do what they could, just as there were in other countries.

Britain did its bit to expand the death toll of the Holocaust by defying international law and the terms of the Palestine Mandate by closing off Palestine to all Jewish immigration in 1938, when the Jews were desperately trying to flee.  Later, in 1944, the British stonewalled a deal Himmler offered to the allies to exchange a million Jews bound for the concentration camps for a few trucks, some soap, and some coffee.

As Hitler gained control of Europe, a number of countries reacted in surprising ways.  Finland, Denmark, Italy, Bulgaria, the Serbs tried to save as many Jews as they could.  In countries with a high incidence of long standing anti-Semitism, while there were some incredibly heroic and decent people,  a large portion of the locals turned their backs while their neighbors were dragged off to the camps. In Norway, Austria, France, Poland, the Baltic States, the Ukraine, Romania, Croatia, etc., the natives were downright enthusiastic and actually helped round the Jews up and turn them over to the Nazis, even though they had a good idea of what was in store for them.  In Poland, for example, Cardinal Glemp was telling the Poles that it was the Jews fault the Nazis were in Poland and that it was a good thing that the Nazis were getting rid of them.

To a lot of Europeans, the Jews were a problem.  They liked and  approved of how the Nazis handled that problem, or at the very least  had no particular concern about it.   Since the Nazis handled a lot of the dirty work, they were able to  pretend they never heard or saw anything.

Europeans  have always had a totally unjustified view of themselves as civilized, decent and humane, as opposed to, say we loutish, brutal Americans.  The Holocaust and their cooperation in it gives the lie to that conceit.  For a few years, while the memory was still fresh, there was at least a certain undercurrent of shame.  The Holocaust and their cooperation and acceptance made them look in the mirror and have to smell the excrement of their souls instead of being able to keep pretending it was perfume.  They hated that and harbored a deep resentment towards the Jews for surviving – as living witnesses to their worst moments and an admonishment before God and man.  Virtually the only country in Europe that ever attempted to deal with these feelings on a national level was Germany.

Over the years, a lot of that European  resentment was transferred to a more socially acceptable target, the Jewish State – the Zionists.  And, it continues to remain a not so covert theme in Europe’s media and academia, especially as the Holocaust survivors conveniently die off.  It makes it easier to forget what happened, or even to deny that it happened.

That, along with the need to appease their growing Muslim populations, is where the anti-Zionism, the frequent comparison of Israel with the Nazis, the notions of a ‘Palestinian Holocaust’, the blood libel cartoons come from.  It explains why a lot of the Brits and others aren’t all that upset at the prospects of not teaching the Holocaust, especially since they can blame it on Muslim sensibilities.  It’s their way of subconsciously (or not so subconsciously) saying to the world and to history – “See, look.  We aren’t so evil.  Look at what the Jews are doing?  Look at how evil those ZioNazis are!  Besides, if they were just out of the picture, the Muslims would be satisfied, we’d have peace and quiet and we could forget all about the whole thing.”

That’s why a lot of Europeans will never forgive the Jews for Auschwitz.  And why it carries over in hatred and resentment toward Israel today – for being so inconsiderate as to continue to insist on surviving.  Take the time to read: “It Is Time for Jews to Think About Leaving Western Europe:”