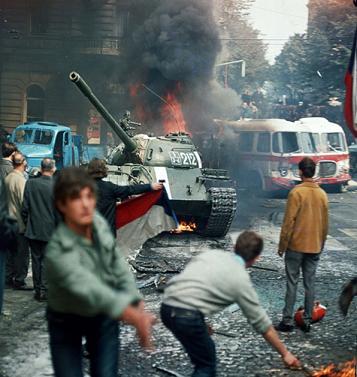 “As soon as man began considering himself the source of the highest meaning in the world and the measure of everything, the world began to lose its human dimension, and man began to lose control of it.”   Vaclar Havel

Socialism is a centrally planned economy in which the government controls all means of production. Born of a commitment to remedy the economic and moral defects of capitalism, it has far surpassed capitalism in both economic malfunction and moral cruelty.  Capitalism, while not perfect, is the world’s dominant economic system that guarantees our God-given rights, rights central to our existence and security.

Communism grew out of the socialist movement. Both systems are based on the principle that goods and services produced should be owned publicly and controlled by a central government. Both begin at the same point – to make the distribution of wealth equal, government must take control of the wealth. Communism is by definition extreme socialism.

“If I were asked the difference between socialism and communism, I could only reply that the socialist tries to lead us to disaster by foolish words and the communist try to drive us there by violent deeds.” Winston Churchill

Soon after  WWII, Czechoslovakia went into the hands of the communist party.  National elections held in 1946 resulted in a significant representation for leftists and communist party members and a coalition government formed by Eduard Benes.  The communist party organized strikes and protests while  clamping down on any opposition and by 1948,  had forced other coalition parties out of the government.   Rigged elections were held to validate the communist victory and Czechoslovakia became a one party state.  Two million Germans were expelled from the country and their property confiscated.

By the 1960’s 95% of all privately owned companies had become the property of the state and any resemblance of basic human rights had been destroyed.  Alexander Dubcek, secretary of the communist party, attempted to create a more human version of socialism – “socialism with a human face” – that would guarantee people’s basic rights and reduce political persecution but his attempt culminated in the 1968   “Prague Spring”.   These new freedoms were a threat to the Soviet Union and in August 1968, 5 Warsaw Pact member countries invaded Czechoslovakia and Soviet troops occupied the country until 1989.  The Soviets eliminated the new freedoms that they considered a threat and any signs of opposition or disapproval were destroyed.

Vaclar Havel born and raised in Czechoslovakia, suffered the discomforts of sequestration and class discrimination when the communists took power in 1948. He was forced to quit school at 15 and denied a higher education. While most children of the politically “unreliable classes” were trained as sappers (readily available expendable mine sweepers), Vaclar found himself working as a lab assistant and later, forced service in the engineer corps, before eventually making his way into the theater and the world of literary politics.

After the Soviet invasion Havel became a leading dissident, reviled by the communist controlled drive-by media, a founder of Charter 77  and spent much of his 40’s in and out of prison. It was from personal experience in seeing that a single party rule violated all notions of human rights and freedoms that Havel  wrote The Power of the Powerless.

During the communist domination there were a few puppet parties that supported the communist regime but communist control made it impossible to found any true  independent party.  Officially the constitution guaranteed the right to form parties,  but in reality it could not be done.  Dissidents from communist doctrine were arrested and imprisoned to work in uranium mines for the Soviet Union.

The 1950’s was a decade of strong persecution with people often imprisoned and/or executed. While the 50’s helped to create the idea of a Christian martyr, the “normalization” period created a type of Christian who was ready to compromise. Those who stood for justice in public life might be classed as a dissident. It created a double life. The communist aim was to put Christians into a specified building with a known address where they could sing and pray, but Christianity was not to be seen or heard outside these places.

Even though the constitution stated that everyone had the freedom to attend church, anti-Christian Marxism and Leninism were the progressive ideologies taught in school and anyone expressing an interest in religion was considered a dissent.  Books, movies and music was censored.  History was rewritten to advance the communist agenda.   High School teachers, under control of the communist party leaders, decided whether students received higher education or simply went to work for the system. Only children of the communist party elite were slotted for good jobs and positions within the government.

“Let them quit these gospels of envy, hate and malice.  Let them abandon the utter fallacy, the grotesque, erroneous,  fatal blunder of believing that by limiting the enterprise of man, by riveting the shackles of a false equality. . .they will increase the well-being of the world.”    Winston Churchill

← Fantasy Socialism Versus Real Socialists
Buttigieg in Iowa – A Victory or A Sign of Decline? →