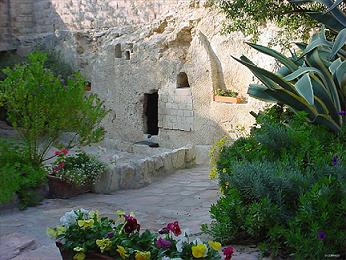 The Church of the Holy Sepulchre, located in the city of Jerusalem, is the “traditional” site of the tomb of Jesus, identified by the mother of Constantine (Queen Helena) some 300 years after the death and resurrection of Christ.  Unfortunately, the tomb the present day Church covers fails to match the Biblical records.

All four Gospels give clues to the location and appearance of the Resurrection Tomb.  It was a new Tomb hewn out of rock, located in a Garden, outside of the Walls of Jerusalem, near to the place where Christ was crucified.

In 1882, British General Gordon, while exploring sacred sites in Jerusalem, discovered a small hill located “without the gate” of  the walls of Jerusalem at the north end of Mount Moriah called “Skull Hill,” so named due to its shape.  Numerous early writers have identified Skull Hill with the “Golgotha” of the Scriptures.   Golgotha means “Summit” and is also used to describe the cranium or top of a skull.  The hill is a natural landmark with roads on three sides, one of which is the great northern road leading from the Damascus Gate to Samaria.

During his exploration of Skull Hill, Gordon found the site of a tomb cut in the face of the rock cliff of the hill.  The  current owner had  at one time attempted to dig a cistern and found  a “Jewish” tomb filled not only with rubble but  intermingled with human skulls and bones taken from nearby graves.

In 1867, the owner of the site had approached  Conrad Schick, a German architect and archaeologist and told him he had uncovered a Jewish tomb that had a cross on its wall and asked him to look at it.   Schick explored the tomb and saw the cross, made with red paint and Greek letters at the four corners.  He also reported  finding two chambers within the tomb, one of which contained three trough graves leading him to believe that the tomb had been enlarged and converted into a Christian burial area in the 5th or 6th century A.D.  He advised the owner to leave the site as he had found it.

Besides meeting all the main conditions of Golgotha, Skull Hill is and has been from ancient times a place of burial of Moslem, Jewish and Christian.  The Hill also shows traces of rent rock generally believed to have been caused by earthquakes.  In addition, the Hill is associated by ancient rabbinical and early Christian tradition with the death of Stephen – the traditional site of the “Place of Stoning” – the Beth ha-Sekelah of the Mishna and the place of public executions for Jewish criminals.

During the centuries following the Resurrection, the tomb and garden surrounding it passed through various hands and was put to varying uses.  There is distinct evidence that  at one time it was desecrated by the observance of Venus worship rites.  History tells us that in 135 A.D. the Emperor Hadrian, after his destruction of Jerusalem, desecrated the Tomb of the Resurrection by heaping soil over it and erecting a shrine for the worship of Venus above it.

After the death of the site owner, General Gordon purchased the property and with the help of other Christians formed a society (The Garden Tomb Association)  “for the preservation of the Tomb and Garden outside the walls of Jerusalem, believed to be the true Holy Sepulchre and Garden of Joseph of Arimathea.”

Excavations around this Garden Tomb during the past 100 plus years have yielded evidence that the area was once a fertile garden containing several cisterns.  In 1924 a fine wine-press was discovered about 5 feet below the present ground level, giving validation to the site being a Garden which in ancient times meant a working vineyard or orchard.

In Byzantine times, after Constantine the Great legalized Christianity in the early 4th century, a large Christian church was built over the entrance to the Tomb.  Today, the springs of the arches of this building can still be seen on either side of the entrance.

The ruins of an adjoining church and  monastery were excavated in 1882, found to bear the name of St. Stephen.  It was erected by Eudoxia, the wife of the Emporer Thodsius in 460 A.D. to the memory of Stephen, the first Christian martyr.   The excavation uncovered two tombstones  almost touching the Garden Tomb – one bearing the inscription, translated as “the church of the witness of the Resurrection” and the other –  “buried near his Lord.”

The entrance to the Interior of the Garden Tomb is through a small doorway about 4 foot high, chiseled  in the solid rock.  The tombs overall size is about seven and one-half feet in height; fourteen and a half feet in length and a little over eleven feet in width.   A low partition divides the tomb into two parts, one of which  appears to be an “ante-chamber” for mourners.  Two steps down into the eastern portion of the tomb there are three receptacles (loculi) for human bodies, only one of which was completed, indicating the tomb was unfinished (Mark 15:46 and Luke 23:53).

On the east wall of the unfinished center loculus is a cross in red paint discovered in 1867.  Another cross was found over the finished vault.  Both had Greek letters in the corners of the crosses. Over the ravages of time, these symbols are no longer discernible but drawings of them were made at the time they were first discovered.   On the left, above the cross arm is the name of Jesus –  on the right is the title “Christ” – below the cross arm on the left is a form of Alpha and on the right Omega –  Reading: Jesus Christ, the First and the Last.

Since crosses were not used as a Christian emblem until the 4th Century A.D. they were determined to be 6th or 7th Century additions to the Tomb.  However, they clearly show that the tomb had been used or venerated for Christian purposes.

There was also found two cisterns in the Garden in an area in front of the tomb.  In 1952,  the larger cistern was excavated.  It was found to have been cut out of natural bedrock for a depth of around 11 feet below the present ground level.  The chamber, measuring 56 feet 8 inches long by 33 feet 4 inches wide by 36 feet from ceiling to floor, was roofed over by masonry.   The walls and ceiling were found to be lined with a double layer of fine Roman cement to make it watertight.  In the north-east corner wall there was an embossed cross measuring 4 feet 2 inches by 3 feet 4 inches.  In the ceiling were embedded iron hooks from which lamps were suspended.  Near the south wall there is a pool of water 10 feet in diameter and 5 feet deep, obviously used for baptism.

Again, it is evident that the embossed cross was made when the chamber was lined with cement,  making the alteration after  the 4th Century when Christianity was legal.  Historians ponder that the cistern was fashioned into a type of  Church to honor the place as an early secret meeting place for Christians prior to the 4th century.

The Tomb, formally known as “Gordon’s Tomb of Christ” has been known to the public for many years.  Many eminent scholars give credence to the argument that it is a pre-Christian tomb, constructed by Jews around the time of Christ and afterwards converted to Christian uses.   Its locale fits the Biblical description of the Tomb of Christ.