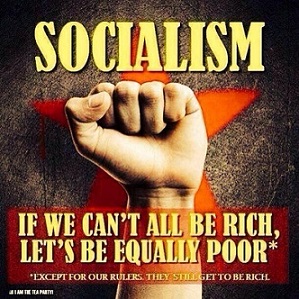 “If men were born in need of crutches, instead of having legs, the fact would be otherwise. We should then be in need of help, and would require outside aide; but according to the wiser and better arrangement of nature, our duty is done better by not hindering than by helping our fellow-men; or, in other words, the best way to help them is just to let them help themselves.” Frederick Douglass

Equality of outcome is a concept describing a state in which people must be given the same opportunities regardless of ability. It describes a state in which people have the same material wealth, or at least, the general economic conditions of their lives are similar. The left wishes to impose this socialist agenda on America by taking from the haves to give to the have-nots, even though history shows that it leads to equality of poverty for the peons and wealth for the ruling elite.  Social justice is nothing more than a play on the Marxist theory that all rights must be surrendered in favor of the masses.

Marxism holds that no person can be granted any right over material goods or the means of production because private property is the universal source of wealth and personal possession gives one man power over another. Abolition of the rights to inherit, of personal wealth, centralization of credit in the hands of the state, equal liability of all to labor for the state, the establishment of industrial armies, especially for agriculture, and total enslavement to the state is necessary radical surgery that must come about in order to give birth to a Utopian society.

As Thomas Sowell noted in his 1998 essay Race, Culture, and Equality, there is no reason to expect equal outcomes. “Let us assume, for the sake of argument, that not only every racial or ethnic group, but even every single individual in the entire world, has identical genetic potential. If it is possible to be even more extreme, let us assume that we all behave like saints toward one another. Would that produce equality of results? Of course not! Real income consists of output and output depends on inputs. These inputs are almost never equal–or even close to being equal.”

Educational differences are just one source of economic disparities. Demographics are another. “The physical settings in which races, nations, and civilizations have evolved have had major impacts on the cultures developed within those settings. At its simplest and crudest, the peoples of the Himalayas have not had an equal opportunity to acquire seafaring skills. Nor have Eskimos had an equal opportunity to acquire knowledge and experience in growing pineapples or other tropical crops.”

There is no question that blacks and their descendants faced the additional barrier of color prejudice, but can we measure its effects by assuming that black people would have had the same income and wealth as white people in the absence of this factor–especially in view of the large disparities among different groups of white immigrants, not to mention the rise of some non-white groups such as Chinese Americans and Japanese Americans to incomes above the national average?

The Irish, Italian, Jewish, and Chinese peoples who arrived as immigrants to America were discriminated against. Yet within only a very few generations, without the help of affirmative action, redistributive policies and big government oversight, all of these peoples had integrated into society and had, for the most part, achieved economic success.

Forcing equal outcomes will never work because it is contrary to the human condition. All individuals are unique and all groups have different stories. It is not the job of government to force a Marxist utopia. It is the job of the government to secure the basic principles of liberty, justice, and opportunity; to foster a free and flourishing society.

“The truth is that the only “class” in the United States excluded from reaping the benefits of capitalism is the class that chooses not to participate in American society. Fueled by the rhetoric of leftists, this class sits idle, dreaming of perceived wrongs that justify its inactivity. The only exploitation in America is committed by politicians, who use stolen money to subsidize this class in exchange for votes. That is not justice — it is criminal.”  Jayme Sellards

← Old Lives Matter
Yes, You Need a Gun During the Virus Scare..and After →