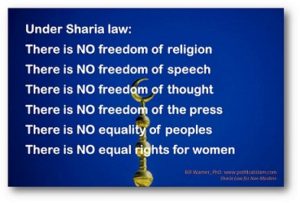 It has been a long term goal of Islam to subjugate America through the use of cultural jihad. However, for that to succeed it is necessary that there be enough people in this country willing to facilitate it. Put more bluntly, there has to be enough people who are either too complacent to notice the threat or too stupid to see that Islam is not a positive development.  Luckily for the Islamists, liberals, progressives, secularist and snowflakes have been busy laying the groundwork for years, in our schools, in academia, in the lap dog media, in government, in the corporate world and elsewhere.

Much of the Orwellian future Conservatives have been predicting has already arrived thanks in large part to the leftist agenda accomplished by President Obama. And even though we now have a President who is working to eliminate the swamp, the left still controls the narrative spreading multiculturalism, relativism, identify politics, ad nauseam, which continues to provide an ideal environment for stealth jihadists to ply their trade.

Cultural jihad is more difficult to resist than armed jihad because it is a slow creeping destruction of our freedoms. It’s easy to harbor the hope that if push comes to shove, the vast majority would drop their illusions and rally to the defense of their country and their heritage. However, I am not so sure any longer that there are enough of us to make a difference.

A big part of the left’s cultural demolition campaign is the destruction or our cultural heritage and thanks to the leftist controlled education system, tens of millions are now convinced that America is a rotten society based on rotten principles. They’ve been conditioned to believe that almost any other form of government, of morals and religion, or lack thereof, would be preferable to what we now have. Socialism? Communism? Islam? Why not give it a chance?

While it may be hard to imagine blasphemy laws in the United States, I would remind you that criticism of Islam is already a crime in much of Europe and Canada. If blasphemy laws did come to the U.S.—if it became a crime to criticize Islam—where would you stand?  Would you suddenly think, “This has gone too far. I never realized where all this would lead”? Not likely. If you think “Merry Christmas” is a micro-aggression against Muslims, you’ve already got one foot planted in the sharia camp.

Take registered Democrats, for instance. A 2017 Rasmussen poll showed that “Democrats are more likely to think that Muslims are mistreated in America than to think that Christians are persecuted in the Islamic world,” which is surprising considering that 90,000 Christians died for their faith at the hands of Muslims in 2016 compared to a reported 127 Muslim victims of assault in the U.S. Of course reality no longer rules in much of modern America – it’s the narrative that matters. For many Democrats, anti-blasphemy laws would be seen as simply another form of affirmative action, just compensation for years of hatred against Muslims.

Academia and the lap dog media have already made their choice to side with Islam. Already universities have allowed Islam countries to pay them off with grants to preach Islamic propaganda. Qatar already owns Islam studies in Texas A&M, VCU, Carnegie , Cornell, Northwestern and Georgetown.

Feminist are not concerned about the lack of freedom for Islamic women because, in their delusional state, the number one enemy of feminism is Christianity. Why else would they embrace a Linda Sasour, a Muslim woman who pushes the destruction of feminism thought sharia law? The only known feminist who has actually criticized Islam’s blasphemy laws and its harsh treatment of women is Phyllis Chesler which as a result has made her number one enemy of the feminist movement.

While many small business owners still embrace our Republic values, many big corporations have essentially sold out to Islam. Corporate speech codes are almost as irrational as the campus variety, and talking about your faith or wearing Christian jewelry at work can have serious repercussions. If you are a Christian, it is only a matter of time before Facebook suspends you, Google makes your websites inaccessible and PayPal blocks your accounts.

To giant corporations the whole idea of loyalty to the country will seem quaint. They are, after all, global entities. You might as well ask the UN whose side it is on. Eventually, it will be taken for granted that there is and always has been only one side – Islam.

Source: Whose Side Are They On? By William Kilpatrick