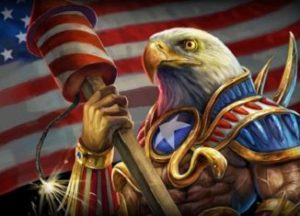 The U.S. is an exceptional nation in world history that stands for limited government, separation of powers, the rule of law, freedom of religion, freedom of speech, the right to bear arms and the free-market economy, etc. These have long contributed to making America incredibly free and prosperous, a magnet for immigrants and an undeniably positive force in the world for most of our history.

Abraham Lincoln believed that these principles were a solid foundation upon which the American people might stand their ground against the forces of tyranny. “All honor to Jefferson,” Lincoln once wrote, “to the man who, in the concrete pressure of a struggle for national independence by a single people, had the coolness, forecast, and capacity to introduce into a merely revolutionary document, an abstract truth, applicable to all men and all times, and so to embalm it there, that to-day, and in all coming days, it shall be a rebuke and a stumbling-block to the very harbingers of re-appearing tyranny and oppression.”

Today, these founding laws and principles are under attack. Key pillars of our history and identity are being vilified and destroyed. Educators are teaching oncoming generations that the enduring narrative about individual liberty and constitutional checks and balances are a mask for wealthy, white, European men to dominate. Such thinking has made its way into the highest levels of government, to the point that, on many issues, politicians share the views of the nation’s worst enemies. It is a dangerous trend.

The left claims that the Founding Fathers no longer have anything relevant to say, according to Chris Pandolfo in an article for the Conservative Review. They hold in contempt the idea of natural rights found in the laws of nature. They view the structure of the Constitution as “archaic, idiosyncratic, and downright evil,” to quote constitutional law professor Louis Michael Seidman – a leftist who should be commended for his honesty. And sadly to say, there are those on the right who agree, who embrace the disruptive, at times violent, tactics of the left. Though they pay lip service to securing rights and protecting liberty, by their actions they reject the very principles that protect our freedom.

It is a road that leads to universal misery. The weakness of the Left’s political philosophy lies in its relativism – it is a house built on sand. If rights come from and are secured by power, not by an objective standard such as the law of nature, then what are the moral limitations on that power? There can be none. Then, if power is exercised through violence, it may be said that ultimately there is no moral limitation on violence. The founders acknowledged government’s purpose to be to save us from such a sorry state of mankind.

“A Republic, if you can keep it,” Benjamin Franklin said of the government the founders created for us. By rejecting the founding, by failing to respect and defend the natural rights of our countrymen, even those on the Left whom conservatives oppose, we will not keep our republic. We will lose it and we will deserve to lose it, having been proven unworthy heirs of the great traditions and freedoms handed down to us by those who bled and died to win them.

Let the Declaration of Independence, then, be a rebuke to those in this country who would so determinedly toss aside the natural rights of their countrymen. Let it be a stumbling block against the tyrant souls of ideologues and the demagogues. Let all Americans of good conscience claim their heritage, embrace their first principles, defend the natural rights of their countrymen, observe their patriotic duty to impose self-restraint on their liberties, and restore good, limited government for the security and happiness of all.

“Government is instituted for the common good; for the protection, safety, prosperity, and happiness of the people; and not for profit, honor, or private interest of any one man, family, or class of men; therefore, the people alone have an incontestable, unalienable, and indefeasible right to institute government; and to reform, alter, or totally change the same, when their protection, safety, prosperity, and happiness require it.” John Adams, Thoughts on Government, 1776

Sources: How the Left Opposes The Philosophy of American Independence, by Chris Pandolfo; and The Destruction of the Rule of Law, by Gerald Flurry