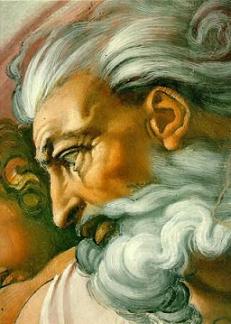 Atheists contend that God is nonexistent and Agnostics allege that there is a very high probability that He does not exist.  Theist, on the other hand, possess a rational belief that God exists and that anyone who genuinely pursues the truth, who follows the available evidence, will come to the same logical conclusion.

Matter Demands a Maker. No rational person can deny that matter exits. But the logical question to ask is “Where did it all come from?” What was the cause? What made matter? A study of the material Universe reveals that every physical effect must have an adequate antecedent or simultaneous cause, an idea known as the Law of Cause and Effect or the Law of Causality.

The current scientific theory [best guess] is the Big Bang which says that 14 billion years ago all of the matter and energy in the Universe was concentrated in a tiny ball of matter that exploded, causing the eventual formation of galaxies throughout the Universe.

The first Law of Thermodynamics says that in nature, matter and energy are neither created nor destroyed. So where did that “original” ball of matter originate?  According to Stephen Hawking in 2011 “nothing” caused the Big Bang. “Nothing” is not a reasonable explanation. If at one time in the past “nothing” existed, then logically, nothing should exist today.

Life Demands a Life Giver. Scientist knows that life does not pop into existence from nothing. Biogenesis says that in nature life comes only from previous life of its own kind. Over the years the truthfulness of this law has been documented by thousands of scientists, one of the most famous of which was Louis Pasteur, whose work dealt a crushing blow to the notion of spontaneous generation.

More recently, staunch evolutionist Neil Shubin, in his book Your Inner Fish, conceded that the biological law of everything is that “every living thing on the planet had parents. . . every living thing sprang from some parental genetic information.”  To take this admission to its natural conclusion would say that life could not have sprung from non-living chemicals. Materialistic evolution cannot adequately account for or explain the most basic laws of science, not the least of which is the Law of Biogenesis.

Design Demands a Designer. Everyday observation reveals and confirms the obvious fact that complex, functional design demands a designer. Paintings demand painters; poems demand poets; architecture demands architects, etc. The Universe is extremely fine-tuned and functionally complex from the earth’s precise orbit around the Sun to a shorebird’s 15,000 mile yearly migration pattern and the amazing digestive system of the human body. The truth is, as evolutionist Jerry Coyne admitted, “Nature resembles a well-oiled machine….our universe seems ‘just right’ for life. It looks as if…a super-intellect has been monkeying with physics.”

Since the Universe exhibits complex, functional design, and by definition complex, functional design demands a designer, then the Universe must have an intelligent designer. This argument for God is logically sound and observationally true. A person can know without any doubt that God exists if for no other reason than that the Universe’s design demands a Designer. “For every house is built by someone, but He Who built all things is God” (Hebrews 3:4).

Intelligence Demands an Intelligent Creator. Intelligence is defined as the capacity to acquire and apply knowledge” or the ability to learn or understand. Man is an intelligent being. He has constructed spaceships, built artificial hearts, constructed computers, wrote poetry, calculated where Mars will be in 50 years, and built everything from pianos to Play Station video game consoles.

Dust does not give way to organized dust particles that have “the capacity to acquire and apply knowledge.” Water does not think. The mindless mud that evolutionists contend gave way to intelligent life on Earth is nothing but a delusional tale unsupported by everything we know from observation and experience. Neither “nothing” nor inorganic matter ever produces intelligent creatures.  What we observe in nature is that intelligence demands previous intelligence. Just as the first life demanded a supernatural life Giver, the first intelligent being demanded a self-existent, miracle-working Creator of intelligence.

Morality Demands a Moral Law Giver. Why do most people generally think that some actions are “right” and some actions are “wrong,” regardless of their subjective opinions? While objective morality may be outside the realm of the scientific method, every rational person can know that some things are innately good, while other things are innately evil. If some things can be legitimately criticized as morally wrong, then there must be an objective standard, some higher law which transcends the provincial and transient which is other than the particular moral code and which has an obligatory character which can be recognized.

Atheistic evolutionists George Gaylord Simpson, confessed that “good and evil, right and wrong, concepts irrelevant in nature except from the human viewpoint, become real and pressing features of the whole cosmos as viewed morally because morals arise only in man.”   If there is no God, then there is no objective basis to say that some things are right and others are wrong. Reason demands that objective good and evil can only exist if there is some real, objective reference point outside of nature.

American atheist Dan Barker alluded to the legitimacy of this argumentation for God’s existence in 2009 when he explained that one of the things which could falsify atheism would be if God spoke to man and gave him specific information about future events.

Shut the door! The one extremely valuable line of evidence that confirms the Bible to be the inspired Word of God is the presence of accurate, predictive prophecy contained within its pages. Not only are prophecies of the Bible fulfilled in minute detail with complete accuracy, but these fulfillments are often accomplished centuries after the prophecies were made, hence the need for scripture lawyers and critics to undermine the very nature of the Word, to discredit the prophecies. Completely accurate, fulfilled prophecy is a characteristic that verifies the divine inspiration of the Bible.

Jesus Demands a Supernatural Explanation. Human beings can do many things but they cannot walk on water unassisted, give sight to the blind, instantly reattach severed ears or raise the dead. If ever such a man existed, His life would logically testify to the existence of a supernatural Being. Christ did not merely claim to be God in the flesh; He did what a reasonable person could expect if God were ever to prove His divinity on Earth –  He fulfilled precise prophecies and worked supernatural miracles, including His resurrection. The life and works of Jesus testify to the existence of a supernatural Being.

← Enough Already!
How Can We Have Two Systems of Justice in This Country? →