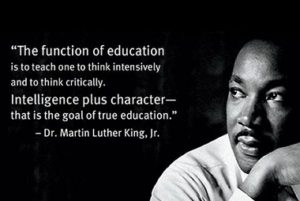 “If a nation expects to be ignorant and free, in a state of civilization, it expects what never was and never will be.” Thomas Jefferson

It is a sad state of affairs that 43% of Americans haven’t the slightest idea which Amendment grants them freedom of speech, and more than 50% are unable to name the three branches of our own government. Is it any wonder that we have become one of the least historically aware nations in the world?  A 2014 report by the National Assessment of Educational Progress showed that an abysmal 18% of American high school students were proficient in U.S. history.

Did you know you can graduate from George Washington University, a private research university in Washington, D.C., with a history degree without ever having taken a single college level U.S. history class? Unfortunately they are not the only one. Less than one-third of what is considered the best U.S. colleges and universities require history majors to take a single history course. How can they teach that which they do not know?

A 2012 story in Perspectives on History magazine by University of North Carolina professor Bruce VanSledright found that 88% of elementary school teachers considered teaching history a low priority because they didn’t want to offend students or the student’s parents. According to VanSledright, the majority of teachers don’t know enough about history to teach it.  Is that scary or what?

According to an article in the New York Times by Diane Ravitch, “If knowledge of the past is in fact relevant to our ability to understand the present and to exercise freedom of mind, as totalitarian societies, both real and fictional, acknowledge by stringently controlling what may be studied or published, then there is cause for concern about many Americans’ sense of history. The threat to our knowledge of the past comes, however, not from government censorship but from indifference and ignorance. The erosion of historical understanding seems especially pronounced among the generation under 35….”  She goes on to quote an American history teacher from a Brooklyn community college as stating that his students weren’t stupid, they just had an abysmal background in history.  “They never heard of Daniel Webster; don’t understand the Constitution; don’t know the difference between the Republican and Democratic parties.”

A history department chairman at another New York college agreed: “My students have no historical knowledge on which to draw when they enter college. They have no point of reference for understanding World War I, the Treaty of Versailles or the Holocaust.” But the problem goes even deeper according to this professor. “They think everything is subjective. They have plenty of attitudes and opinions, but they lack the knowledge to analyze a problem. We are in danger of bringing up a generation without historical memory. This is a dangerous situation.”

In the last few years history has experienced a bit of pseudo-renaissance but rarely in a positive light. Take the recent campaign to tear down monuments for example. After the riots in Charlottesville, Virginia, the nation blew up into a controversy over celebrating historical figures. It wasn’t just a battle about a few statues – it became an ongoing battle about which history is worth remembering and which history should be erased or rewritten.  Isn’t removing all reminders of past history, including statues and memorials, the very first thing that dictators and tyrants do when they want to control a country?

Pulitzer Prize-winning historian Walter McDougall writes that: “history is the grandest vehicle for vicarious experience – truly educates…” that it obliges young minds to reason, wonder and brook about “vastness, richness and tragedy of the human condition.” Studying history provides a context in which to fit all other knowledge – like math, science, or literature that a student may learn, McDougall says. He goes so far as to call history “the religion in the modern curriculum.”

History provides a terrain for moral contemplation. It helps provide identity and lays the foundation for genuine citizenship. It helps us understand how people and societies behave and how current, and prospective changes will affect our lives.  Even more important, history encourages habits of mind that are vital for responsible public behavior, whether as a national or community leader, an informed voter, a petitioner, or a simple observer. Knowledge of history allows us to learn from the mistakes of the past and hopefully gives us the ability to prevent the same mistakes from happening now and in the future.

“Imagine hope to be removed from the human breast and see how Society will sink, how the strong bands of order and improvement will be relaxed and what a deathlike stillness would take the place of the restless energies that now move the world. The scholar will extinguish his midnight lamp, the merchant will furl his white sails and bid them seek the deep no more. The anxious patriot who stood out for his country to the last and devised in the last beleaguered citadel, profound schemes for its deliverance and aggrandizement, will sheathe his sword and blot his fame. Remove hope, & the world becomes a blank and rottenness.” Ralph Waldo Emerson

← Should you be a slave to my fears?
The Lies the Legacy Media Will Tell Us →