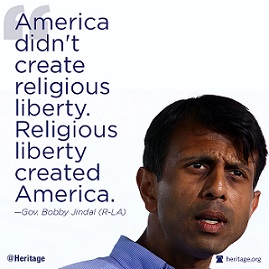 It means the freedom to do all of this without negative interference from the government, direct or indirect, except within the limits of public order. Religious liberty does not preclude the government from giving material support to religious organizations as long as that support doesn’t turn into control or the negative treatment of religious minorities.

Religious liberty belongs not just to individuals but to communities. Civil society precedes the state. It consists of much more than individuals which alone are weak. Communities give each of us friendship, meaning, a narrative, a history and a future. They root us in a story larger than ourselves or any political authority.

Faith is an act of free will or it can’t be valid.  Forced belief violates the person, the truth and the wider community of faith because it’s a lie.  People have rights even if they choose a lie over the truth.  Rights aren’t given by the state nor can anyone, including the state, take them away.  They’re inherent to every human being by virtue of creation.  Religious liberty is a natural right because it is hardwired into our human nature.  And freedom of religious belief, the freedom of conscience is, along with the right to life, the most important right any human being has.

In 1915 Turkish officials deliberately murdered more than 1 million Armenians, overwhelming Christian. It was a religious and ethnic cleansing campaign that lasted into the 1920’s. It was a gruesome crime Turkey has never acknowledged.   And while this may seem impossible in our day, more than 70% of the world now lives with some form of religious coercion.

Tens of thousands of Christians are murdered every year for reasons linked only to their faith. North Korea has wiped religion out of its culture. China runs a sophisticated security system to interfere with and control its religious communities. Islamic countries range from relative tolerance to murder and forced conversion of religious minorities. In Europe laws that interfere with religious dress, practice and public expression are on the rise robbing itself of any real moral alternative to radical Islam spreading throughout its countries.

Religion played a large role in the founding and building of the U.S. and until recently, our laws have reflected that.   A large majority of Americans still believe in God and identify as Christian. Many young people however,  have become disaffiliated and because of the left’s academic agenda to remove any form of religion from public discourse, more and more young people have no idea what role religious freedom played in the founding of our country.

From his agenda to push homosexual marriage to his demand for the right to murder innocent children,  history may prove Obama to be the least friendly to religion. The future, no doubt, will bring more assaults through hate law legislation and anti-bullying policies that have turned our public schools into indoctrination centers on matters of human sexuality and gender identity. We’ll continue to see restrictions on public funding, revocation of tax exemptions and expanding government regulations against anything religious in nature with the exception of Islam.

A big problems today is the use of words like justice, rights, freedom and dignity without any commonly shared meaning to their content. We speak the same language but the words don’t mean the same thing.  Words like justice have emotional throw-weight, so people use them as weapons.  And it can’t be otherwise because the religious vision and convictions that once animated American life are no longer welcome at the table. After all, what can human rights mean if science sees nothing transcendent in the human species? Or if science imagines a trans-humanist future? Or if science doubts that a uniquely human nature even exists? If there’s no inherent human nature, there can be no inherent natural rights.

We’re lying to ourselves if we think we can keep our freedoms without reverting to the biblical vision, the uniquely Jewish and Christian vision, of who and what man is. Human dignity has only one source and only one guarantee.   Mankind is made in the image and likeness of God. And if there is no God, then human dignity is just elegant words.

In practice, no law and no constitution can protect religious freedom unless people actually believe and live their faith, not just at home or in their church, but in their public lives. It is also true that no one can take our freedom unless we give it away.

We must always remember that God makes greatness, not failures. He makes free men and women, not cowards.   And when the miracle of God’s love happens, even in just one of us, the world begins to change.

Adapted from a speech by Charles J. Chaput, archbishop of Philadelphia, given at St. Charles Borromeo Seminary.

← The Perils of Pelosi
The American Revolution is Finished – Or is it? →