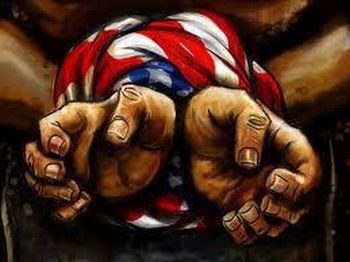 “If the government exists to serve us, and if freedom is part of our humanity, how can the government take freedom from us?  Is human freedom in America a myth, or is it reality?”

Since the government derives its power from the consent of the people, the final and capstone natural right is the right not to consent to any government. When the government assaults freedom and offers no accountability to the people,  are we to accept it?  Do we wave the white flag?

Thomas Jefferson said that “whenever any form of government becomes destructive of these ends [the protection of our natural rights], it is the right of the people to alter or to abolish it, and to institute new government, laying its foundation on such principles, and organizing its powers in such form, as to them shall seem most likely to effect their safety and happiness.”

The right to ignore or disobey an unjust government has been articulated by many powerful American thinkers throughout our history.

Henry David Thoreau said that “this positive moral duty of civil disobedience to unjust laws” comes from the reasoning that if no action is taken by an individual to disobey and change an unjust law or legal system, that individual becomes an enabler, acting in violation of the morality set forth by Natural Law.

Martin Luther King, Jr.  also understood the necessity of a moral obligation to civil disobedience.  In his “Letter from Birmingham Jail” he wrote “I cannot sit idly by in Atlanta and not be concerned about what happens in Birmingham.  Injustic anywhere is a threat to justice everywhere.”    In King’s own words  “A just law is a man made code that squares with the moral law or the law of God.   An unjust law is  a code that is out of harmony with the moral law. . .Any law that uplifts human personality is just.  Any law that degrades human  personality is unjust. . .One has not only a legal but a moral responsibility to obey just laws.  Conversely one has a moral responsibility to disobey unjust laws”

Civil Disobedience is not defined by rioting, burning or looting.   It is simply the refusal to obey governmental demands or commands especially as a nonviolent and  collective means of forcing concessions from the government.    The purpose of civil disobedience is to convey a political message, which is accomplished through increased media coverage of the issue.   Also, if the law broken is the law being protested, it sends the message to authority figures that people consider the law so unjust, they are willing to openly disobey it.   An example of this is  the Boston Tea Party where they refused taxation without representation;  Rosa Parks’ refusal to give up her seat on a city bus to a white person, as was required by law in 1955 in Montgomery, Alabama, or Hobby Lobby’s refusal to provide abortion drug coverage because the HHS mandate violates its religious liberties.

Civil disobedience is often an effective means of changing laws and protecting  liberties. It also embodies an important moral concept that there are times when law and justice do not coincide and that to obey the law at such times can be an abdication of ethical responsibility.

We no longer have a two party system in America.  We have one Big Government Party.  It has a Republican (RINO) wing and a socialist Democrat wing. One hand washes the other. Neither wing is devoted to the Constitution and members of both wings openly mock it.

Government today is not logic nor reason, it is not fidelity to the Constitutuion and it is not compliance with the Rule of Law.  Rather, it is  force.  Government today steals liberty and property in the name of safety.  It restricts your ability to express yourself, to defend yourself, to be yourself; and it uses fear to keep the people submissive.

Government rejects its moral and legal obligations, insulates itself from litigation, breaks its own laws, makes its own rules, declares worthless paper to be money and then devalues even that.”

“All tyranny needs to gain a foothold is for people of good conscience to remain silent.”  Thomas Jefferson

Source:  Its Dangerous to be Right when the Government is Wrong, by Judge Andrew Napolitano