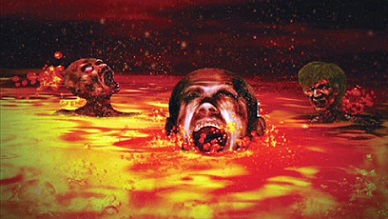 In a 2015 Pew poll around 70% of Americans said they believe in heaven while only 58% believed in hell. Compared with non-Christians and the unaffiliated, U.S. Christians are more likely to believe in both afterlife destinations. The existence of heaven is almost universally accepted by Mormons (95%) and members of historically black Protestant denominations (93%), as well as by about eight-in-ten or more evangelical Protestants, Catholics, Orthodox Christians and mainline Protestants.  82% of evangelical Protestants and members of historically black Protestant churches say they believe in hell. Somewhat fewer Catholics, Mormons, mainline Protestants and Orthodox Christians also hold this view.

Dr. Scott Bruce, a Catholic professor of history at the Jesuit operated Fordham University in New York City, recently published an article in the Washington Post – “Do We Still Need to Believe in Hell? Dr. Bruce claims that Hell is nothing more than a medieval invention adapted from ancient myths and is no longer the cornerstone of Christian doctrine.  He claims to look forward to a day “in some, better future,” when the idea of hell might be permanently retired as an “important step in the maturation of human communities that can mete out justice on their own, without supernatural aid.”  And we wonder why the churches are in such disarray?

I’ve attended numerous churches in my life and heard various concepts of hell, the majority of which claim that sinners will spend eternity burning in a fiery hell. Personally, I’ve never understood that concept. In Ezekiel 28 God not only tells us of Satan’s downfall from the Cherub that covereth, but of his destruction which is described in verses 18 and 19. “…I will bring forth a fire from the midst of thee, it shall devour thee, and I will bring thee to ashes upon the earth….All that know thee shall be astonished…thou shalt be a terror and never shalt thou be any more.” I find it hard to believe that God would give mankind eternal torture and let Satan off the hook so easy.

Technically, the word hell does not appear anywhere in the King James Bible because it was never used in the original manuscripts. However, there are 4 Hebrew and Greek words translated as hell in the Bible.

The first is the Hebrew word Sheol which literally translates to the grave or world of the dead, sometimes called paradise, a place where every soul goes to await judgment. We know it is a place where God is present because David wrote in Psalms 139:8 that “if I make my bed in Sheol, behold, thou art there.” In the book of Job 14:13, the oldest book of the Bible written before the exodus from Egypt, Job asks God to hide him in Sheol until His wrath had passed. The word Sheol can also mean the grave or the pit.

There are three Greek words translated hell in the New Testament. The Greek word Hades, translated as hell actually means a grave or the unseen place of departed souls. We read of it in Luke 16:19-31 as Jesus spoke of Lazarus and the rich man. Another Greek word translated hell is Gehenna, figuratively meaning a place or state of punishment. It is actually the name of the Valley of Hinnon in Jerusalem where filth and dead animals of the city were burned, which is a very fitting symbol of the wicked and their destruction. The third Greek word translated as hell is Tartaroo which literally means the deepest abyss of Hades. It is only used once in 2 Peter 2:4 to describe the place where the fallen angels are held until judgment.

The traditional concept of Christianity holds that once someone dies they immediately go to heaven or hell. God teaches that they go to a prepared place awaiting judgment, a place that Christ describes in Luke 16:19-31, a place that is separated by a great gulf (chasm) where the departed await final judgment. This is the same place that we read of in 1 Peter 3:19 where Christ went and preached unto the spirits in prison. The Greek word translated prison is phulake which is an isolated place of guarding, a place of division.

While there are some in the church that dispute the idea that Christ would preach to those already passed, it makes sense when you realize that until His death, all the people who had previously passed, died under the law. It would hardly be fair to judge them under the law when His death fulfilled the majority of the blood rituals and statues they had to live under to obtain salvation. In Galatians 2:16 we read that “man is not justified by the works of the law but by the faith of Jesus Christ…for by the works of the law shall no flesh be justified.”  And again in Galatians 3:11-13 that “no man is justified by the law in the sight of God, it is evident: for, the just shall live by faith….Christ hath redeemed us from the curse of the law….”

Judgement does not take place until after the Millennium when everyone will stand alone before God to receive either rewards for their work on God’s behalf, or are judged to the second death, which is the destruction of their souls. Christ warned us in Matthew 10:28 not to “fear them which kill the body, but are not able to kill the soul, but rather fear Him which is able to destroy both body and soul in Gehenna” (see definition above).