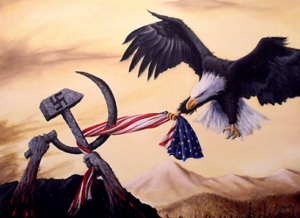 America is in serious decline and unfortunately, most Americans either don’t understand what is happening or simply don’t care.

An ideal society may seem blissful to some but we don’t live in an ideal world. History has shown over and over again that greedy, envious, narcissist, power hungry men have used both systems to enrich themselves and enslave the people.

The Communist movement in America has only one real object – to destroy our Republic, to eliminate our Constitutional form of government. While as a political party they have little power, the broader Communist movement has significant influence in many aspects of politics and society.

You don’t have to look too far to find evidence of Communism’s influence in America today.   They achieved many of their goals by weaseling themselves into key political positions within the Democrat Party and into our education system.  Look around you – the final phase to overthrow our Constitutional government is in full swing.

In practice, communism has never been the grassroots movement Karl Marx predicted. It has been driven by small groups of intellectuals and elites who seize power. Hence the targeting of the American intelligentsia—present and future.

According to a former staff director of a Senate investigations subcommittee, in the years between 1935 and 1953, the Communist Party “enlisted the support of at least 3,500 professors—many of them as dues-paying members, many others as fellow travelers, some as out-and-out espionage agents, some as adherents of the party line in varying degrees, and some as the unwitting dupes of subversion.

As a result, our educational system has produced generations who cannot spell, and worse, cannot think creatively or independently.  I can’t but wonder if Albert Einstein would have arrived at his theory of relativity if he had been educated in one of today’s American public schools. Most likely he would have ‘discovered’ marijuana and variant methods of sexual intercourse instead.

America may not have replaced the stars on its flag with hammers and sickles, but it is by now undeniable that it is divided between the idea of freedom and that of communism. The American people long ago rejected God and allowed Satan-inspired Communist philosophy to infiltrate, subvert and divide the nation.

Talk of equality sounds noble, but the Communist version of “equality” is only a means to an end. It was launched as a worldwide class struggle, pitting the poorer class against those who had been economically more successful, arousing class prejudice, stirring up racial hatred.  While they pretend to stand for peace, they engender only strife, and they feed like a vulture on poverty, discontent, discouragement, confusion and chaos.”

Alexis De Tocqueville, a French philosopher who visited our shores when we were a young nation, said he came to the United States to learn what magic quality enabled a handful of people to defeat the mighty British Empire twice in 35 years.  He looked for the greatness of America in her harbors and rivers, her fertile fields and boundless forests, mines and other natural resources; studied our educational system, Congress and the Constitution without comprehending America’s power.  It was not until he went into the churches of America and heard pulpits “aflame with righteousness” did he understand the secret of America’s genius and strength.  “America is great because America is good, and if America ever ceases to be good, America will cease to be great.”

Those that push Socialism or Communism are not here to save you – they want to own you.

Source:  Has American Been Influenced by Communism? by Andrew Miillner, the Trumpet