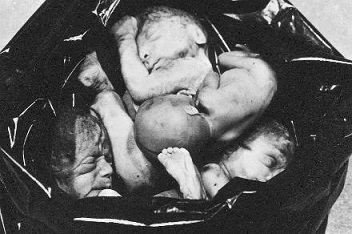 The heart of the pro-choice argument is based on the argument or more accurately, the deleterious notion that aborting ones offspring is exercising a woman’s right to decide all matters concerning her own body.

Pro-life philosophy is based on the belief that a child in the womb is not ever the woman’s body, but an entirely separate entity.

If the fetus is the woman’s  body why would any woman do something harmful to her own body?  Don’t we try to protect people from themselves, people who are prone to Self-Injury Syndrome or people who are suicidal?   They are sedated, counseled, treated or incarcerated to keep them from inflicting bodily harm or death to themselves.

Only in abortion do we march, rally, advocate for and enact legislation to make it possible for a woman to hurt, maim and kill what they insist is their own body.  More than a philosophical delusion, this is high level stupidity, and hypocrisy combined.

If, as the argument goes, the unborn child is part of the woman’s body, why doesn’t that “part” of her body have the same rights extended to it,  the right to choose, to thrive, and to live?  The absurdity of “rights over a woman’s body” fails to answer this question and leaves one wondering if it is the right to decide about their own bodies or is it the right to murder an unwanted child that these women want?

Nature itself speaks against our fallen condition and selfishly driven philosophies.  Almost every species of animal will fight to the death to save the life of its offspring.  Only humans and only in this backward last day’s generation, will one species, supposedly the most advanced, fight to the bitter end to put their offspring to death.

“It’s my body – it’s my choice” is philosophically lost in relativism and subjectivism, but scripture, God, nature, common sense and billions of pro-life people around the world, have labeled it for what it is – murder.  It will take a great deal more than a flawed philosophy to establish any real reason or excuse to cover the genocide of  millions of unwanted babies.

In the U.S. we have resorted to science, the courts and even presidents, like Obama who publicly stated that knowing if a fetus is a human being is “above my pay grade.”

The glaring stupidity and callousness of such a statement proves beyond doubt that modern women, abortionists and those “scientists” who pride themselves on explaining everything, even if it allegedly happened eight to ten billion year ago, have an obvious gap between theory and reality.

Those who presume to explain the origins of life by describing a primordial pool of ooze hit by a lightening bolt that kicked off the first one cell amoeba and presto life began on the planet, suddenly go dumb on the theory of the fetus.

If asked when life begins in the womb they do everything but plead the Fifth to avoid a reality that in practice almost everyone refutes.

But not knowing something such as when life begins is not a philosophy at all and should not be presented as one.  Why are we allowed to use a non-philosophy as a means to stop the life of even one human being?  Honesty is circumvented when it is seen that we will use anything, philosophy or non-philosophy to do what we damn well please.

Until the alleged “most brilliant minds” of this generation can come to a consensus about when life begins, shouldn’t we choose to err on the side of caution?   In the absence of acceptable scientific evidence, why have we resorted to a purely subjective philosophy to answer the question of when life begins?

In a nation that once fought and won the argument against “taxation without representation” how can it be that we now allow a death sentence against an innocent without representation?  Could it be that the most likely advocate for the unborn – the mother – has opted for a faulty philosophical premise known as the “right to choose?”  Philosophy, ideology, campaign tools and politics hardly seem a fair price for the blood of the innocents.

The thousands of unborn human beings lost each day to the subjectivism of “choice” is very objective proof that the only war being waged is against the unborn.

Most of those who are pro-choice in the U.S., may have long since forgotten the scriptural admonitions about “choices,” if they ever knew them.  For the record and in the hopes of jogging the better judgment of even one of them, here is a reminder:

“I call heaven and earth to record this day against you, that I have set before you life and death, blessing and cursing: therefore choose life, that both thou and thy seed may live.”   Deut. 30:19

Odd, how that brings us full circle to the biblical explanation known as “Doctrines of Devils.” (1Tim 4:1)  Let’s do the common interpretation of this verse as it applies to taking a life.  Setting aside all human reasoning and fanciful philosophy, what this verse says is – maliciously destroying a life is always demonically inspired – no questions asked.

Reverend Michael Bresciani  “The Philosophy of Abortion Is Intrinsically Flawed”

← Democrats Vision for America – “The Great Reset”
Follow the Law →