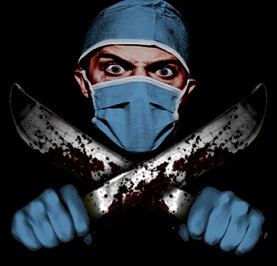 There is a dark side to Western medicine, even worse than ObamaCare.

While the U.S. claims to be the world leader in medicine, it came at a price.  There were horrors committed against people in the name of scientific research; and human experimentation that subjected unsuspecting people to experiments that are at times cruel, sometimes painful, sometimes deadly and always unethical.

Medical experiments began as early as 1822 when an army surgeon pioneered gastric medicine using a patient with a permanent open gunshot wound to the abdomen.  From 1845 to 1849 Dr. J. Marion Sims performed medical experiments on enslaved African women without anesthesia.  In 1895 a NY pediatrician infected a 4 year boy with epilepsy with gonorrhea.  By 1895 another doctor used 29 children at Boston’s hospital as guinea pigs by performing spinal taps just to see whether the procedure was harmful. And it only went downhill from there.

The government experimented with mind altering drugs such as LSD on military personnel.  The Army and Navy released chemical clouds of cadmium over American and Canadian cities and Oahu was sprayed with Bacillus Globigii.   The military contaminated their own  facilities with strains of bacteria, live toxins,  nerve gas, and chemical poisons.   Eskimos and Athapascan Indians were injected with doses of iodine-131.  Mosquitoes infected with yellow fever and dengue fever were released over Georgia and Florida.

Light bulbs filled with bacillus subtilis were dropped down ventilation gates into the NY subway.    Pregnant women were injected with radioactive cortisol.   New York allowed foster care children to be used for experimental AIDS drug trials.  In a government sponsored study, HIV-positive African-American pregnant women were given placebos.  The CDC and Kaiser Pharmaceuticals injected 1,500 six month old black and Hispanic babies with an experimental measles vaccine not approved for use in the U.S.

400,000 soldiers going to the Persian Gulf were ordered to take  pyridostigmine, an experimental nerve agent medication believed to be responsible for Gulf War Syndrome.  Schizophrenics  in  private and Veterans Hospitals were given  MCPP, a chemical that increases psychotic symptoms,  fed   amphetamines  even though it can  worsen symptoms in 40% of patients,  L-dopa to deliberately induce psychotic relapse, and Yohimbine to induce post-traumatic stress disorder.

Pfizer conducted medical experiments on Nigerian children with Trovan, an experimental antibiotic  for meningitis, cholera and measles.  Eleven of the 200 children died while the balance suffered from brain damage, organ failure and severe side effects.    The US government funded experiments on Guatemalan prisoners, children, women and the mentally ill who were deliberately infected with STD.

From  2000 to 2010, artificial blood was transfused into research subjects across the United States without their consent by Northfield Labs. Later studies showed the artificial blood caused a significant increase in the risk of heart attacks and death.

In 2010, the U.S. weapons manufacturer Raytheon announced that it had partnered with a jail in Castaic, California in order to use prisoners as test subjects for its Active Denial System that “fires an invisible heat beam capable of causing unbearable pain.  The device, dubbed “pain ray” by its critics, was rejected for fielding in Iraq due to Pentagon fears that it would be used as an instrument of torture.

And that is only a sampling of the experimental research we know about. One can only wonder what horrors will be committed if the government succeeds in establishing single-payer health care.  Death Panels might be the mildest form of death the government  subjects us to.

sources:  The Army tested mosquitoes as viral weapons in Florida in 1956; Experimental Drugs linked to Gulf War Veterans‘ Ills by Warren Leary, NY Times; Top 10 US Government Experiments Done on Its Own Citizens,