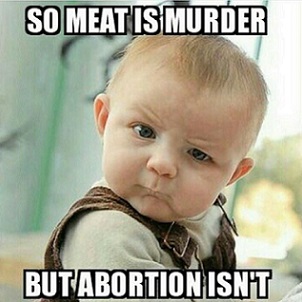 Vegetarians and pro-choice advocates are not necessarily the same people but, the activists in both groups lean to the left. They are mostly pro-choice when it comes to a woman’s “found” right to murder her own child but express moral reservations about slaughtering animals for food.

This contradiction is exemplified by PETA, who went so far as to equate barbecuing chickens with incinerating Jews in the Holocaust. The head of PETA, Ingrid Newkirk, expressed concern over the treatment of cockroaches, but has “no position” on abortion. In other words, animals deserve respect but children – not so much!

What kind of person could seriously claim that eating meat is murder but scalding an unborn child to death in a saline solution, or ripping it a part, limb by limb, or stabbing a scalpel into its brain once it is partially born isn’t murder? Or for that matter, what kind of insane person really believes that wearing fur is a crime but murdering an unborn child is a choice?

Several years ago San Francisco proposed an ordinance that would punish anyone who circumcised a male under the age of 18 years with a year in jail – no exceptions allowed for Jews or Muslims. They argued that circumcision was painful and causes permanent sexual dysfunction – both of which are hog wash. Luckily the ordinance was removed from the ballot when a Superior Court Judge ruled that it violated a California law that makes regulating medical procedures a state matter.

But here the dichotomy, both moral and logical, is just as striking as with the abortion-vegetarian issue. We are asked to believe that a few seconds of minor surgery on an eight-day-old baby is terribly painful, but dismembering an eight-month-old unborn child is of no concern.

What about tattooing and body piercing? The activists see no problem with inserting metal objects into eyebrows, tongues, noses, lips, nipples, navels, and even labia and penises yet believe circumcision “disfigures” the human body!

Consider the statement, “Science is the only way to really know truth.” How could you prove that statement by science? It is actually self-refuting because there is no scientific test you could use to prove that it is true! Science cannot prove logic to be true because it assumes and requires logic in order for it to work.

Science cannot prove that rape is evil. While it is possible to demonstrate that there are negative physical or psychological effects of rape, there is no scientific test that can prove it is evil. Science can describe how the natural world is, but moral truth carries an “oughtness” (how things should be) that goes beyond what merely is.

There is one other kind of truth that cannot be proven or disproven by science – Religious truth. It does have a certain amount of overlap with science, but the overlap tends to be rather small. Rigidly applying the same methodology used for studying mundane things would be deficient when considering divine things.

God is in a different category from every created thing that we can grasp and study under a microscope. He is unlike everything he created. In Exodus 3:14 God tells Moses to call him ehyeh asher ehyeh translated “I am that I am,” or “I will be what I will be.”

Christianity does not make merely esoteric claims; it makes claims about logic, science, history, philosophy, and ultimately reality itself. It paints a picture of the world that matches reality. It does not force a person to deny that our world is real, rather, it cohesively explains why things are the way they are.

Logic is also a tool. Those who stood by and watched Jews and dissidents being led away to death camps were acting logically by protecting their own lives. But those who saved Jews were acting illogically by endangering their lives and the lives of their families in order to act morally.

Most rescuers of Jews were devout Christians. But to join the SS, which ran the death camps, one had to deny being a Christian. In fact, the SS had their own pagan marriage and baptism ceremonies, and replaced Christmas carols with Nazi songs. Do these facts tell us something?

When science is substituted for a moral code as a guide for living our lives, we are in serious trouble. Wherever we seek for truth, at least let us seek it. Let us not become so bogged down in political correctness that we hold beliefs that are opposed to traditional morality, and at the same time, mutually contradictory.

A society which believes that meat is murder, but abortion isn’t, will not survive − and doesn’t deserve to.

← Using Digital Dollars to Control
A Vortex of Inefficiency and Failure →