“Greater love hath no man than this, that a man lay down his life for his friends.”  John 15:13 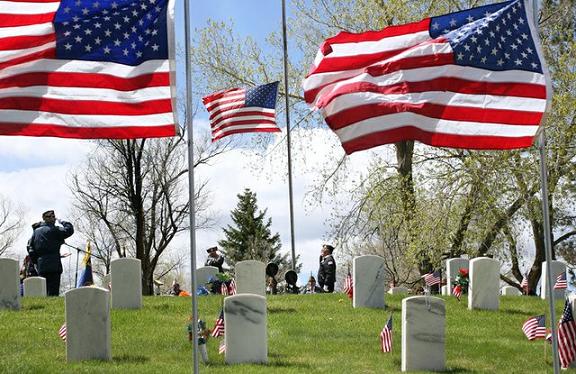 Memorial Day, originally called Decoration Day, was  created as an occasion to honor those who have paid the  ultimate price to ensure our freedom.  It is our opportunity to stop and give  thanks for the many who have died protecting that freedom.  In the short period of our nation’s history, more than 1.3 million brave Americans have lost their lives in battle so that we may enjoy our freedom.

Unfortunately, many Americans have forgotten the meaning and traditions of Memorial Day.  At many cemeteries, the graves of the fallen are increasingly ignored and neglected.  Most no longer remember the proper flag etiquette for the day.  While a few towns and cities still hold Memorial Day parades, most have not held a parade in decades.

In an address on May 30, 1884, Oliver Wendell Holmes said: “to the indifferent inquirer who asks why Memorial Day is still kept up we may answer, It celebrates and solemnly reaffirms from year to year a national act of enthusiasm and faith. It embodies in the most impressive form our belief that to act with enthusiasm and faith is the condition of acting greatly. To fight out a war you must believe something and want something with all your might. So must you do to carry anything else to an end worth reaching. More than that, you must be willing to commit yourself to a course, perhaps a long and hard one, without being able to foresee exactly where you will come out. All that is required of you is that you should go some whither as hard as ever you can. The rest belongs to fate. One may fall—at the beginning of the charge or at the top of the earthworks—but in no other way can he reach the rewards of victory.

We can hardly share the emotions that make this day to us the most sacred day of the year and embody them in ceremonial pomp without in some degree imparting them to those who come after us. I believe from the bottom of my heart that our memorial halls and statues and tablets, the tattered flags of our regiments gathered in the Statehouses, and this day with its funeral march and decorated graves, are worth more to our young men by way of chastening and inspiration than the monuments of another hundred years of peaceful life could be.

But even if I am wrong, even if those, who come after us are to forget all that we hold dear, and the future is to teach and kindle its children in ways as yet unrevealed, it is enough for us that this day is dear and sacred.”

“A man’s country is not a certain area of land, of mountains, rivers, and  woods, but it is a principle and patriotism is loyalty to that principle.”  George William Curtis

← Has Socialism Harmed No One?
Silencing the Lambs →