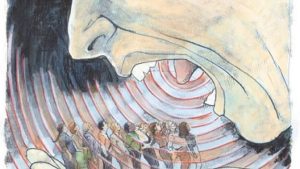 The vaunted human capacity for reason may have more to do with winning arguments than with thinking straight.

In “The Enigma of Reason” scientists Hugo Mercier and Dan Sperber  attempted to make the point that reason is an evolved trait, like bipedalism or three-color vision, to resolve the problems posed by living in collaborative groups.

In the real world, reasoning is the capacity for consciously making sense of things, establishing and verifying facts, applying logic and justifying practices and beliefs based on existing or new information.  It is truly something rare in today’s world, especially on the left.

How did we reach the point where a large portion of society no longer is interested in learning or debating political philosophies, economic theories or moral principles that challenge our existing world?  Personally I believe that government education, or should I say indoctrination, is behind most of our problems.  Naturally psychologists have their own theory.

A 2017 study published in the Journal of Experimental and Social Psychology, led by Jeremy Frimer, a psychologist at the University of Winnipeg, concluded that avoiding facts inconvenient to our worldview isn’t just some passive unconscious habit we engage in – we do it because we find these facts to be genuinely unpleasant and as long as it remains unpleasant and easy to avoid, we’re just going to drift further and further apart.

It is what the study calls “motivated ignorance,” a state of refuge for those who, in the face of intellectual challenges, avoid critical reexamination of their sacred beliefs – at all costs.  Curiosity may have killed the cat but lack of curiosity is a dangerous thing for humans.

Shutting ourselves off from opposing views creates a bubble where we remake the world into our own image, where reality only exists in our minds, where anyone that doesn’t follow our line of thought becomes the enemy, an enemy that must be silenced. And of course the left is prolific in the art of demeaning their opponents to silence them into submission.

The war against reason, or reality only serves to dumb down political debate.  Reason and reality is silenced while leftist arguments need never be thoroughly presented – intimidation and name-calling proves to be much easier and satisfyingly self-righteous.

History proves such trends lead to ugly outcomes, outcomes that we are beginning to see on our local news.

Lack of exposure to other viewpoints may help explain why so many leftists can muster no greater argument than “shut up, racists.”

← Sexual Immorality Is Now A “Right”
Why Do Good Men Do Nothing? →