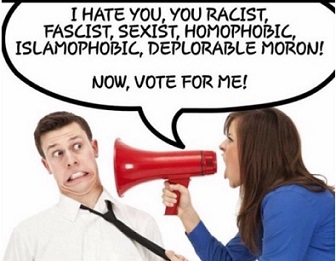 Let’s be honest – the left hates Christians, Conservatives, Patriots, and at times, members of their own party, especially if they go against the “divine” dictates of the ruling Marxists in charge of today’s Democratic Party.

Yes, they hate you!  They want you enslaved and obedient, if not dead.  And once you finally accept that, everything that is happening today begins to make sense.

Don’t believe me – go on social media and say something positive about America, or Christ, or former President Trump and they’ll come swarming like locusts.  Engage them and very quickly they will drop their masks and tell you what they really think.

They will tell you that Christians are idiots and vets are scum; that normal heterosexuals are sub humans whose role is to labor as serfs to subsidize the progressive elite and its clients; that you should die to make way for the New Progressive Man/Woman/Other.  These are the social justice warriors who have manufactured a bizarre mythology and scripture of oppression, privilege, and intersectionality.  Instead of robes, they dress up as genitals and kill babies as a blasphemous sacrament.

When they called former President Trump illegitimate what they were saying is that our desire to govern ourselves was illegitimate.  Their beef wasn’t with him, it was with us, the normal people who dared to rise up and demand their right to participate in the rule of this country and this culture.

They hate you because, by defying them, you are attempting to prevented them from living up to the dictates of their false religion.  Our rebelliousness has denied them the state of grace they seek, exorcising their divine right to dictate every aspect of our puny lives.  This sick faith gives meaning to these secular weirdos, giving them something to fill their empty lives with a messianic fervor to go out and convert the heathen, and the “heathen” is us, according to Kurt Schlichter at TownHall.

Dinesh D’Souza, in his book, The Big Lie: Exposing the Nazi Roots of the American Left, reminds us that the left has a long history of racism and racial terrorism, using cultural intimidation and street thuggery to enforce their ideology while insisting they aren’t the ones who are fascists. This big lie was born from a conviction so total that it is meant to not only transform the future but reach backward in time to change the past and redefine meaning across all of human civilizations.

Complacency in the face of fascism can be fatal. Even when it doesn’t kill people, it kills republics and buries freedom.  A century of fascism has left us a divided nation teetering on the edge of tyranny.  And the leftist who claim to be saving us from this tyranny, are the same ones doing their very best to implement it.

To resist  we must fight for truth. Words matter. Meanings count. Principles define us. We are not the fascists – they are.  We are fighting for our very existence!

← The Good Times Are Over
The Party of Compassion – Seriously? →