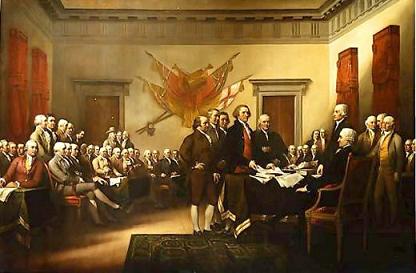 Secularism has robbed Americans of the Godly vision of reality, civil government and law which our Founding Fathers possessed.  Where there is no Godly vision, no understanding of the nature of God and of His dealings with men,  people and nations perish.   The people are as the blind leading the blind – together they will fall into the ditches of history.

In 1776, 98% of the colonists were Protestant, 1.8% were Catholic and 0.2% were Jewish.  Many of the Patriots that fashioned our independence were committed Christians.  Secularists have attempted to obscure these facts and Christians have neglected them.  Did you know that the published battle cry of the American Revolution was “No King But King Jesus.”

Of the founders who met in Philadelphia at the Constitutional Convention, 50 were unquestionably Christian, maybe more as documented by Dr. M.E. Bradford of the University of Dallas in his book, “A Worthy Company.”

Samuel Adams, who saw himself as the “last of the Puritans” is often called “the Father of the American Revolution.” He wrote that free citizens could learn of their rights “reading and carefully studying the institutes of the great Law Giver and Head of the Christian Church, which are to be found clearly written and promulgated in the New Testament.”  When the Declaration of Independence was sign, Adams s declared “we have this day restored the Sovereign to whom all men ought to be obedient.  He reigns in heaven, and from the rising to the setting of the sun, let His kingdom come.”

Patrick Henry, best known for his speech before the Virginia House of Burgesses, “Give Me Liberty or Give Me Death,” recognized the contribution Christianity made to the founding of America.  “It cannot be emphasized too strongly or too often that this great nation was founded, not be religionists, but by Christians, not on religions, but on the Gospel of Jesus Christ.  For this very reason peoples of other faiths have been afforded asylum, prosperity, and freedom of worship here.”

John Witherspoon, the only clergyman to sign the Declaration of Independence, was president of the College of New Jersey, known today as Princeton.  He helped shape the thinking of many key Americans including James Madison who was studying for the ministry.

George Washington was a vestryman in the Episcopal Church.  In 1891 a twenty-four-page manuscript “Daily Sacrifices,” written in Washington’s own hand, was found among his papers.  A sample pray included: “O most glorious God, in Jesus Christ my merciful and loving Father, I acknowledge and confess my guilt, in the weak and imperfect performance of the duties of this day.  I have called on thee for pardon and forgiveness of sin, but so coldly and carelessly, that my prayers are become my sin and stand in need of pardon.”

As he was inaugurated in 1789, Washington got down on his knees and kissed the Bible and then led the entire Senate and House of Representatives to an Episcopal Church for a two-hour worship service.

In his farewell address, Washington’s wrote: “of all the dispositions and habits which lead to political prosperity, religion and morality are indispensable supports…. Let it simply be asked, where is the security for property, for reputation, for life, if the sense of religious obligation desert the oaths. . .. And let us with caution indulge the supposition that morality can be maintained without religion. Whatever may be conceded to the influence of refined education on minds of peculiar structure, reason and experience both forbid us to expect that national morality can prevail in exclusion of religious principle.”

Thomas Jefferson’s religious beliefs are one of the most interesting aspects of his life.  Certain evangelicals were his political opponents and tried to make his religious beliefs a factor in the elections.  While Jefferson never responded nor made any public statements concerning his faith during the election, he was raised Episcopalian and always maintained some affiliation with that church, even though he contributed financially to every denomination in his town.

In his earliest writings concerning religion, Jefferson exhibited a natural theology, a heavy reliance on reason and the belief that morality comes not from special revelation but from careful attention to an inward moral sense.  He considered Jesus to be the teacher of sublime and flawless ethics.  In an 1803 letter to Benjamin Rush, a Universalist, Jefferson wrote “to the corruptions of Christianity I am indeed opposed; but not to the genuine precepts of Jesus Christ himself.  I am a Christian, in the only sense in which he wished any one to be; sincerely attached to his doctrines,  in preference to all others; ascribing to himself every human excellence and believing he never claimed any other.”

Benjamin Franklin when questioned about his religious beliefs, wrote to the Reverend Ezra Stile in 1790: “. . .I believe in one God, creator of the universe; that He governs it by his providence; that He ought to be worshipped; that the most acceptable service we can render Him is to do good to his other children. And that the soul of man is immortal and will be treated with justice in another life respecting its conduct in this.  These I take to be the fundamental principles of all sound religions, and I admire them, as you do, in whatever sect I meet them. . .I shall only add respecting myself that having experienced the Goodness of that Being in conducting me prosperously through a long life, I have no doubt of its continuance in the next, even though I hold not the smallest conceit of meriting such goodness.”

James Madison was very outspoken about his personal religious beliefs.  He once wrote that “I have sometimes thought there would not be a stronger testimony in favor of religion, or against temporal enjoyment. . .than for men who occupy the most honorable and gainful departments. . .publicly to declare. . .by becoming fervent advocates in the cause of Christ. . .”

Alexander Hamilton, a representative to the Constitutional Convention and the first Secretary of the Treasury, regularly led his household in prayer.  He helped form the Christian Constitutional Society whose objective was to support the Christian religion and the United States.  Fatally shot in a duel in 1804, his last words were “I have a tender reliance on the mercy of the Almighty, through the merits of the Lord Jesus Christ.  I am a sinner.  I look to him for mercy; pray for me.”

George Mason, an outspoken advocate for federalism and limited government, drafted the Virginia Declaration of Rights, one of the first State guarantees of the free exercise of religion.  His proposed an amendment to the federal Constitution concerning religion, that read – “religion or the duty which we owe to our Creator, and the manner of discharging it, can be directed only by reason and conviction. . .all men have an equal, natural and unalienable right to the free exercise of religion. . .”

John Hancock, a Congregationalist, and the first to sign the Declaration of Independence said in his inaugural address as Governor, 1780, that “a due observation of the Lord’s Day is not only important to internal religion, but greatly conducive to the order and benefit of civil society.  It speaks to the senses of mankind, and, by a solemn cessation from their common affairs, reminds them of a Deity and the accountableness to the great Lord of all.”

Richard Henry Lee, an early advocate of independence, who, through his urging, was responsible for the passage of the 10th Amendment reserving all undelegated powers to the states and the people, wrote: “Refiners may weave as fine a web of reasons they please, but the experience of all times shows religion to be the guardian of morality.”

It would be impossible to list all Christian Patriots in one article therefore, I encourage all to read and discover the truth of our founding fathers, and to pass it along to your children for it is hard to find any unbiased history in our government run schools.

Sources: “The Christian Life and Character of the Civil Institutions of the United States” by Benjamin Morris, 8th printing, 2010 and “What If Jesus Had Never Been Born?” by James Kennedy and Jerry Newcomb, 1964 are two great books to begin your search.

← Red Flag Laws
Grateful to Be an American →