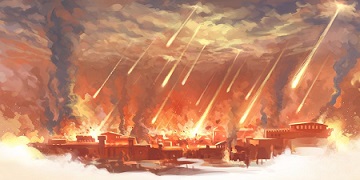 When I was a kid, my family attended many summer Camp meetings.  Having a large family, my parents decided to save money on motels by staying at a KOA campground where we erected a huge tent on a spacious, shaded campsite. I’ll never forget the sense of adventure I felt being on a “real” camping trip. It was such a nice campsite we wondered why no one else had claimed it.

Then it happened! While we attended one of the church services, heavy rain pounded our flimsy fortress. When we returned, everything (our luggage, bedding, food, etc.,) was either submerged or floating in ankle deep water. Apparently, everyone else realized that that campsite was on a low spot prone to flooding. I learned a valuable lesson that summer—be careful where you pitch your tent.

The Book of Genesis tells the story of Lot, Abraham’s nephew, a good man who made some bad decisions that cost him dearly. Conflict erupted between Abraham’s and Lot’s herdsman over a land dispute about grazing rights.

A minor issue became a major problem so Abraham decided it would be best if he and Lot parted ways. Being an honorable man, Abraham deferred to his nephew and offered him first choice of the land. When Lot surveyed the land, he noticed the well-watered plains of Jordan. Chasing the greener grass, Lot “Pitched his tent toward Sodom” (Gen. 13:12, KJV), a dreadful decision that would haunt him to his grave.

Nobody backslides overnight. It’s a process of drifting from God and making little decisions that take you in the wrong direction. You miss a few church services here and there. Your heart begins to grow cold. You make excuses for not praying and reading your Bible. You start hanging out with the wrong crowd. You rationalize a few compromises.

Then one day you suddenly wake up like Samson in the lap of Delilah with a bad haircut or like the Prodigal Son in the pigpen eating half-rotten leftovers. Then you’re left with a sense of wonder—wondering what happened? Where did it all go wrong?

Lot merely pitched his tent toward Sodom.  No big deal, right?  As long as he was with his Abraham, he enjoyed a blessing by association with a godly man in a covenant relationship with God.  But by merely choosing Sodom, Lot gravitated toward an evil environment and his life began to unravel. His life became a tragic tale of what happens to good people when they open the door to the wrong influences.

Gambling with his soul, Lot lost the lottery.  First, he was taken hostage in a battle between nine kings (Gen. 14) and Abraham had to rush to his rescue. That should have been his wake-up call to get out of Dodge, but he ignored it.

Lot obviously lost his senses and was corrupted by the sick society of Sodom. How else could he offer his two virgin daughters to a mob of rapists that pounded on his door to violate the two angels who came to rescue Lot and his family in Gen. 19:1-8? What man in his right mind does that?

When he left Abraham, he was a wealthy man with herds of livestock and many servants. When he fled Sodom, he only took what he could carry. He lost his married daughters and their husbands who perished in the fiery judgment. They thought he was off his rocker when he warned them of pending doom (Gen. 19:14).

He also lost his wife when she regretted leaving Sodom and disobeyed God’s command to not look back as they fled. Lot nearly lost his own life as he lollygagged, insomuch that the angels had to literally take him by the hand and escort him out of the city.

Lot lost what remained of his dignity when his surviving daughters, fearing they were the only people left on earth, enticed him with drink and lay with him.  The resulting children, Moab (who sired the Moabites) and Benammi (progenitor of the Ammonites), became permanent enemies of Israel. What a mess! And you think your family is dysfunctional.

All of this heartache could have been avoided if Lot had only pitched his tent in a different direction. Decisions determine our destiny. Destiny is not a matter of chance; it’s a matter of choice!

Jesus made a compelling comparison between that ancient era and the one in which we now live.  He warned that the world “will be as it was in the days of Lot: people went about their daily business—eating and drinking, buying and selling, farming and building—until the morning Lot left Sodom. Then fire and brimstone rained down from heaven and destroyed them all. Yes, it will be ‘business as usual’ right up to the hour of my return” (Luke 17:28-30).

So, the next time you think the grass is greener on the other side of the fence, remember it’s always the greenest near the septic tank. And unlike Lot, be careful where you pitch your tent.