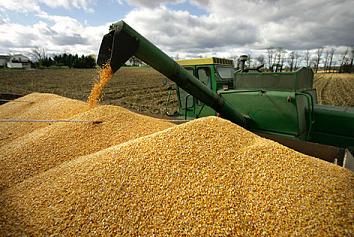 Feudalism  has returned to farming in North America, according to the U.S.  Center for Food Safety’s report detailing the domination over American staple crops by corporations.  For the first time in  history, one company has control of the sale and use of crop seed.

Monsanto has obtained over 650 patents on both genetically engineered techniques and genetically engineered (GE) seed varieties of corn, canola, soybean, potato, alfalfa  and wheat.   By systematically purchasing or merging with existing seed companies, they have obtained dominance   over the sale and use of crop seed.  A December 2009 Associated Press investigation into Monsanto’s business practices revealed that they have control over as much as 95% of all soybeans and 80% of all corn grown in the United States. “At issue is how much power one company can have over seeds, the foundation of the world’s food supply“.

Monsanto’s monopoly has led  to major price increases for farm seed.  Agriculture Department figures show that since 2001,  corn seed prices  have risen 135% and soybean seed prices 108%.  American  Farmers are hard pressed to find quality, conventional varieties of  corn, soy and cotton seeds to plant.  “You can’t even purchase them in this market.  They are not available.”

In order to plant GE seed varieties, farmers must first sign a Technology Agreement  effectively giving Monsanto control, not only over the purchased seed, but over the plants and harvested crops.  Farmers are strictly forbidden from saving seeds for next year’s crop, guaranteeing  Monsanto’s future profits.  Farmers also must agree to give up private property rights and any right to privacy of personal records held by third parties. Monsanto’s army of investigators and attorneys can show up at any time to check farmers planting records and take samples of their crops.  They also have access to USDA Farm Service Agency crop reports which gives them information on any additional property the farmer may own, whether planted or not, and information on adjacent farm land.  Due to natural pollination and seed dispersal, Monsanto has the right to go on adjacent farms to test for crop contamination of patented traits and, if contamination has occurred, those crops come under Monsanto’s control. Even a single purchase of GE seeds can lock farmers into a potentially lifetime contract.  Once seed traits have proliferated a crop, removing it in order to revert to conventional seed is extremely difficult and expensive, leaving many farmers helpless to escape.  With an annual budget of $10 million dollars and a staff of 75 devoted to investigating and prosecuting farmers, Monsanto actively pursues lawsuits for breach of contract or patent infringement.  Combined financial  penalties have forced numerous farmers into bankruptcy.

Through extensive lobbying of state legislators, and pre-emptive laws,  Monsanto has been effective in squashing local laws written to control use of GE seeds.    Laws enacted at the state level usually set minimum requirements and allow for passage and enforcement of local ordinances.    Pre-emptive legislation reverses this norm.

The FDA is aiding and abetting Monsanto’s domination of our food supply by incorporating Monsanto “inspired” regulations which has all but  prevented farmers from saving conventional seeds.  The FDA determination that seed cleaning equipment is a source of seed contamination now forces farmers and small seed companies to invest millions into new “certified” equipment, buildings, storage facilities, harvesting and transportation equipment.   See this article for supporting information.

A former lobbyist and Monsanto employee, Michael Taylor, our new Food Safety Czar, is now a key adviser to the FDA’s Commissioner of Food and Drugs. Taylor’s career began as an FDA attorney in 1976.  He left the agency in 1981 to work as a private attorney and lobbyist for Monsanto.  When he rejoined the FDA in 1991, as deputy commissioner for policy he wrote a “white paper” (an authoritative official declaration) on the safety of bovine growth hormones (rbGH) assuring that farmers using rbGH would not be required to label their products.  This gave Monsanto another opportunity to increase their profits by suing dairy farmers that labeled their products rbGH free.   Michael Taylor left the FDA in 1998 and once again joined Monsanto as Vice President for Public Policy, where he remained until 2000.  Until his appointment by the Obama administration, he worked in academic and research settings at George Washington University’s School of Public Health and Health Services, gaining him the title of a nationally recognized “food safety expert”.

Taylor is not the only former Monsanto employee at the FDA.  Margaret Miller, while working at Monsanto, as a chemical laboratory supervisor,
was asked to prepare necessary scientific reports for the FDA on the safety of rbGH.  Shortly before the reports were submitted, she left Monsanto and went to work for the FDA.  Her first FDA assignment?  To determine whether or not to approve the safety reports on rbGH that she had written while employed at Monsanto.   With the assistance of another former Monsanto employee, Susan Sechen, the reports were approved.

In Europe there has been much better public resistance to
GM, scoffed at by many americans at the time people refused to buy GM, demanded
better food labelling and even ripped up crops.

It now seems our fears and actions were justified alas
Monsanto will try any underhand method to get control, lobbyists have persuaded
the EU to try to force GM on reluctant governments and GM contaminated animal
food ensures that the stuff gets into the food chain
Kristina on June 10, 2010 at 12:56 am

I am sickened and saddened by what Monsanto and the
government are doing to our food sources. Haiti has been offered their seeds to
rebuild their crops and in turn they burned them! We could take a lesson from
them and refuse to eat any GM contaminated food. I will ONLY eat organic
locally grown produce, eggs, and meat. This is the ONLY way we can stop
Monsanto. It has to start in the home of the American people. Supply and
demand.
Marianna on June 21, 2010 at 1:54 pm

Which groups in Washington lobby against Monsanto?

I did not find any major organized groups that lobby against
Monsanto. They pretty much have carte blanche in D.C. There are several
organizations that keep track of Monsanto and report on their web sites –
Organic Consumers and the National Family Farm Coalition.

Petitions will not get us anywhere on this matter. Money
will. If “We the People” , (that have the big bucks) to put lobbiests in DC,
who exactly would they be paying off?? The FDA? That has to happen. It’s all
about the money, so corrupt, sad, but true. Any ideas who would fund such a
person? The public, in general are not privy to any of this…..maybe it’s time
to rally in DC! Against Monsanto. The organic companys that strive to stick to
their morals, arn’t rich enough to fund such a thing…. I’m in, if anyone has a
brilliant idea.

THE PROGRESSIVE MOVEMENT: A Rose By Any Other Name →