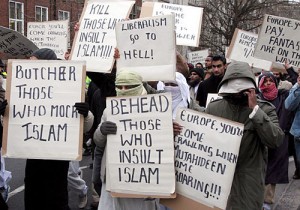 The New York Times seems to think America should embrace Shariah Law because American’s  crusade against it undermines our democracy and ignores our country’s successful history of religious tolerance.

Columnist Eliyahu Stern further thinks that the mere suggestion that Sharia threatens our security is disturbingly reminiscent of the accusations in 19th century Europe that Jewish religious law was seditious.

“Anti-Sharia legislation fosters a hostile environment that will stymie the growth of America’s tolerant strand of Islam.”

Dare I say that Mr. Stern thinks those that oppose Sharia law in America are racists!

Sharia Law, created centuries after the Koran, is a quasi-religous  political doctrine written 1,200 years ago by Islamic authorities.   It is a movement much like Apartheid – the minority supresses the majority. It is essentially Islamic law applied to every area of life.  The 4 sources of the law are the Koran, the Sunna (examples of Muhammad), the ijima (scholarly consensus) and the qiyas (deductive reasoning).   An Islamic pubication says that Sharia law “is much wider than a code of law – it is a comprehensive code of Islamic life which Allah revealed for mankind. . .It is permanent for all people all the time, and it does not change with time and conditions.”

Sharia is not a religion and just because a person is  Muslim does not mean they choose to live under Sharia Law where there is no freedom of religion, equal rights, children’s rights, or freedom of speech.   Under this law:

The goal of those who push for Sharia in America is to have political Islam become an important component of Western life.  Sharia courts are required  to maintain patriarchal power, and judge those according to the tenents above.  Would that not place Sharia Law above U.S. Law?  Already it is being used in our courts and in judicial decisions.

A New Jersey judge cited a husband’s beliefs under Sharia Law as sufficient reason not to find criminal intent on the rape of his wife.  Luckily that ruling was overturned on appeal.    An Oklahoma amendment  to stop the use of Sharia Law and International Law in their state court was granted a temporary injunction by a federal judge.   A Florida judge upheld a binding agreement based on Sharia Law between ex-trustees of a local mosque.

A study  conducted to discover the extent to which Sharia law had in fact entered U.S. states courts suggested that it  had entered into decisions, in conflict with the Constitution and state public policy.  They found 50 cases from 23 different states in  just  a small sampling of appellate published cases.

Examples of Shariah honor killings can be found all over the world.   A New York  Muslim was convicted of beheading his wife because she served him with divorce papers.  In Texas,  a Muslim man shot his two daughters for having unsanctioned boyfriends.   In Arizona,  a father ran over his daughter for being too western and refusing an arranged marriage in Iraq.   In Canada, a father drown his first wife and three of his daughters over dating issues and a 16 year old girl was held down by her mother and stabbed by her father because she didn’t want to wear a hijib.  In 2004 in Newfoundland a 14 old was strangled by her father and brother for bringing dishonor to her family because she was raped.  In Pakistan a father murdered his 6 daughters – two were killed for reportedly having boyfriends and the other 4 were killed because they did not tell on their sisters.   According to Sharia law, these are not crimes.

British Muslim Cleric Anjam Choudary says that Muslims are obligated to implement Sharia Law wherever we are in the world and “in America it can reverse poverty, child abuse, rape, robberies, theft, etc.”   “We believe the whole world must be under Sharia.  America is not blessed by God.  The American dream has become a nightmare.”

According to Eliyahu Stern at the New York Times  – “given time American Muslims, like all other religious minorities before them, will adjust their legal and theological traditions, if necessary, to accord with American values.”     I don’t think Mr. Stern has spent much time reading about Sharia law or Muslim countires that adhere to Sharia law.  Like most liberals, he ignores the facts and pushes the agenda.

To suggest that Muslims will adjust their law to become American is about as nutty as suggesting the New York Times will become a conservative and unbiased paper.

Sharia law is incompatible with and looks down on America law.  It demands all political and legal systems to be subsumed under and submitted to Sharia and it demands that all real Muslims embrace and support Sharia.

The Muslim Brotherhood, established in 1928 seeks to establish an Islamic state in every nation of the world referring to the establishment of Islamic supremacy by nonviolent means as ‘civilization jihad”.  “God is our objective, the Koran is our law, the Prophet is our leader, jihad is our way, and death for the sake of Allah is the highest of our aspirations.”

Beware –  being politically correct to the point that we abandon common sense is dangerous!