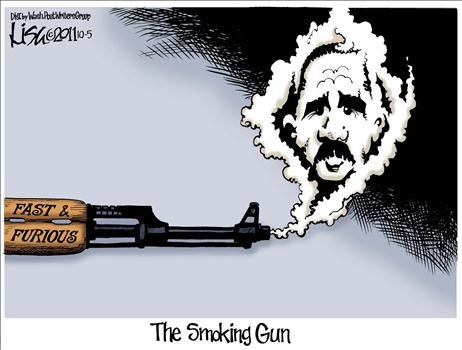 New documents from the head of the National Drug Intelligence Center and Assistant Attorney General Lanny Breuer, and obtained by CBS News, show Attorney General Eric Holder was sent briefings on the controversial Fast and Furious operation as far back as July 2010. That’s at least ten months before the May 2011 hearing, and the documents directly contradict Holder’s statement to Congress.

On May 3, 2011, Holder told a Judiciary Committee hearing, “I’m not sure of the exact date, but I probably heard about Fast and Furious for the first time over the last few weeks.”

The Justice Department has publicly tried to distance itself, but the new documents leave no doubt that high level Justice officials knew guns were being “walked.”

You may view the document here, here and here.

In ‘Fast and Furious’ [letting guns walk] scheme, ATF agents allowed thousands of weapons to cross the border and fall into the hands of Mexican drug cartels, and it remained secret to the public until Border Patrol Agent Brian Terry was murdered last December. Two of the firearms were found at the scene.

The documents show that two Justice Department officials discussed it over in an email exchange Oct. 18, 2010.

“It’s a tricky case given the number of guns that have walked but is a significant set of prosecutions,” says Jason Weinstein, Deputy Assistant Attorney General of the Criminal Division.

Deputy Chief of the National Gang Unit James Trusty replies “I’m not sure how much grief we get for ‘guns walking.’ It may be more like, “Finally they’re going after people who sent guns down there.”

The Justice Department told CBS News that the officials in those emails were talking about a different case which was started before Eric Holder became Attorney General, then later told CBS News that Holder misunderstood that question from the committee – he did know about Fast and Furious – just not the details. [Seems Holder’s having a hard time keeping up with his story.]

House Speaker John Boehner tells Newsmax that Congress will “get to the bottom” of the unfolding Fast and
Furious scandal following new revelations about Attorney General Eric Holder’s involvement in the case. “Members of the House Judiciary Committee are going to get to the bottom of this,” he declared.

“This program has raised an awful lot of eyebrows. There are a lot of questions that are unanswered and this latest revelation about when the attorney general knew what he knew, had been briefed on it, raises even more questions.

“So I am hopeful that my colleagues that serve on this committee will stay on it, and frankly I have no doubt that they’ll get to the bottom of this program that has caused so much chaos.”

California Republican and chairman of the House Oversight and Reform Committee, Rep. Darrell Issa, has called for the appointment of a special prosecutor to delve into the Fast and Furious case. Click here for the entire interview.

After the damning series of documents revealed that U.S. Attorney General Eric Holder and other top Department of Justice officials were aware of the fact that Operation Fast and Furious walked thousands of guns into Mexico, the Obama administration pushed back through Associated Press reporter Pete Yost, attempting to divert the blame to — who else? George Bush.

Republican Rep. Paul Gosar of Arizona told The Daily Caller that Obama administration officials responsible for Operation Fast and Furious might be accessories to murder.

“We’re talking about consequences of criminal activity, where we actually allowed guns to walk into the hands of criminals, where our livelihoods are at risk,” Gosar said in a phone interview. “When you facilitate that and a murder or a felony occurs, you’re called an accessory. That means that there’s criminal activity.”

If this were John Doe from Mississippi, he would have already been investigated, tried and imprisoned.

CBS News investigative journalist Sharyl Attkisson — who’s been covering the scandal from the beginning — says in an interview on the Laura Ingraham Show today that the White House and Justice Department have taken to screaming at her for reporting on the story.

“In between the yelling that I received from Justice Department yesterday, the spokeswoman–who would not put anything in writing, I was asking for her explanation so there would be clarity and no confusion later over what had been said, she wouldn’t put anything in writing–so we talked on the phone and she said things such as the question Holder answered was different than the one he asked. But he phrased it, he said very explicitly, ‘I probably heard about Fast and Furious for the first time over the last few weeks.’

Finally, Attkisson notes that the White House is claiming that a thorough investigation of the scandal is unwarranted:

The complete audio interview can be heard at the weekly Standard.

Read previous articles related to the Holder Fast and Furious Scandal at these links:

Crime Pays If You Work For The Government  Published August 27, 2011

No Honor in Obama’s Administration, Only Liars, Thieves and Crooks  Published July 8th, 2011

← Lecture at Va. Tech Open to Public
ENVIRONMENTALISM I: Dawn of The Aquarian Age →