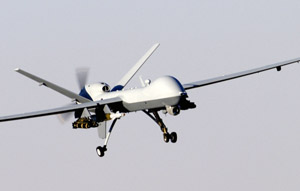 Electronic Frontier Foundation (EFF) filed suit against the Federal Aviation Administration seeking information on drone flights in the United States. The FAAis the sole entity within the federal government capable of authorizing domestic drone flights, and for too long now, it has failed to release specific and detailed information on who is authorized to fly drones within US borders.

Most Americans don’t know much about drones or unmanned aircraft., but the U.S. military has been using drones in its various wars and conflicts around the world for more than 15 years.

State and local police are also using their own drones for routine law enforcement activities from catching drug dealers to finding missing persons. Some law enforcement have even proposed using drones to record traffic violations.

Drones are capable of highly advanced and almost constant surveillance, and they can amass large amounts of data. They carry various types of equipment including live-feed video cameras, infrared cameras, heat sensors, and radar. Some newer drones carry super high resolution “gigapixel” cameras that can “track people and vehicles from altitudes above 20,000 feet, and can monitor up to 65 enemies of the State simultaneously, and can see targets from almost 25 miles down range.” Predator drones can eavesdrop on electronic transmissions and one drone unveiled at DEFCON last year can crack Wi-Fi networks and intercept text messages and cell phone conversations without the knowledge or help of either the communications provider or the customer.

Many drones, by virtue of their design, their Hummingbird size, (16 drone pictures) and how high they can fly, can operate undetected in urban and rural environments, allowing the government to spy on Americans without their knowledge.And even if Americans knew they were being spied on, it’s unclear what laws would protect against this.

As Ryan Calo, the ACLUand many others have noted, Supreme Court case law has not been friendly to privacy in the public sphere, or even to privacy in areas like your backyard or corporate facilities that are off-limits to the public but can be viewed from above. The Supreme Court has also held that the Fourth Amendment’s protections from unreasonable searches and seizures may not apply when it’s not a human that is doing the searching.

The market for unmanned aircraft in the United States is expanding rapidly, and companies, public entities, and research institutions are developing newer, faster, stealthier, and more sophisticated drones every year. In the United States alone, approximately 50 companies, universities, and government organizations are developing and producing some 155 unmanned aircraft designs, according to an FFA fact sheet.

In 2011, Congress, the Defense Department, state and local governments, industry and researchers all placed significant pressure on the FAA to review and expand its current “Certificate of Authorization or Waiver (COA)” program. The FAA is also reviewing its own rules for small unmanned aircraft systems. The agency is expected to announce an expansion of the COA program this month.  If it does, we may see (or be seen by) many more drones in the very near future.

The rapid expansion of a drone arms race has emerged both domestically and abroad, leaving everyone vulnerable. 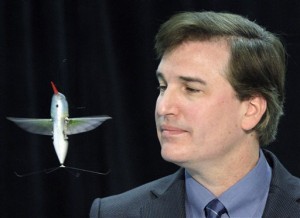 The aircraft with a 6.5-inch wing span can record sights and sounds on a video camera in its belly. Developers say it can perch on a window ledge and gather intelligence unbeknownst to an enemy.

The craft can hover and move quickly in almost any direction, a capability defense officials want in a small aircraft for intelligence and reconnaissance.

The craft was developed for a U.S. defense agency. 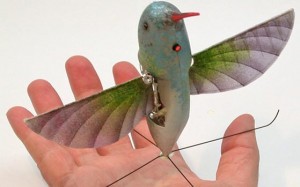