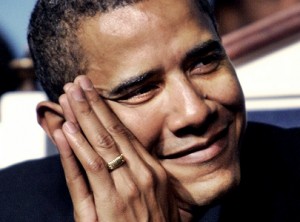 At the National Prayer Breakfast Obama had the nerve to suggest that Jesus would  have supported his latest Socialist scheme to tax the rich.  I guess we shouldn’t be surprised at his hypocrisy.   Wasn’t it back in November that he said that God wanted to see us help ourselves by putting people back to work?

Liberals never cease to amaze me.  They accuse Christians of trying to create a theocracy when in truth they are the ones trying to attach Biblical significance to big government.   They engage God when its politically convenient and draw a line in the sand [separation of church/state] when it isn’t.

When Jesus wanted to help the orphaned and widowed he didn’t hire bureaucrats to do the job  –  he called on the Church.

Liberals forget that the God they quote [out of context]  is the God who also condemns abortion as murder and homosexuality as an abomination.

Senator Orrin Hatch, R-UT made the best comment I’ve heard in response to Obama’s speech.  “In 2008 the president declared that his nomination was the world historical moment when the rise of the oceans began to slow and our planet began to heal.  Someone needs to remind the president that there was only one person who walked on water and he did not occupy the Oval office.”

“Ye hypocrites, well did Esalias prophesy of you, saying: This people draweth nigh unto me with their mouth, and honoureth me with their lips; but their heart is far from me.  But in vain they do worship me, Teaching for Doctrines the commandments of men. . .Hear and understand: Not that which goeth into the mouth defileth a man; but that which cometh out of the mouth, this defileth a man. . .Every plant, which my heavely Father hath not planted, shall be rooted up.  Let them alone: they be blind leaders of the blind.  And if the blind lead the blind, both shall fall into the ditch.”   Matthew 15:7-14

← Allen West – I Love This Guy!!!
Uncle Sam cracking down on Islamists’ critics →