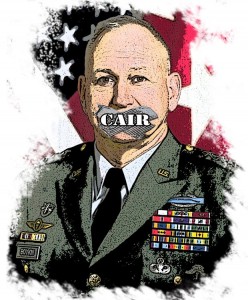 Frank J. Gaffney Jr. reports that from the Council on American Islamic Relations (CAIR), there is a grave threat to America that must be suppressed at all costs; “Freedom of Speech”.

CIAR is demanding that Lt. Gen. William G. “Jerry” Boykin be silenced. Gen. Boykin is an ordained minister, and is one of the United States’ most accomplished and decorated military heroes. He served in and led our most elite Special Forces units for decades, including in many of our most dangerous recent combat operations. He also held a number of senior positions in the intelligence community, including the deputy undersecretary of defense for intelligence.

CAIR has insisted that Gen. Boykin must not address prayer sessions convened by the mayor of Ocean City, Md., and the U.S. Military Academy at West Point.

Four federal judges have affirmed that CAIR is associated with the Muslim Brotherhood and were spawned by one of its American affiliates, the Islamic Association for Palestine.

CAIR was established by Muslim Brotherhood operatives as a political arm and fundraising mechanism for Hamas,  a terrorist organization, according to wiretapped conversations.

Not only are CAIR and its fellow Muslim Brotherhood fronts trying to muzzle Gen. Boykin, they  seek to worm their way into this country – the totalitarian, supremacist politico-military-legal program the Islamists call Shariah.

Team Obama has begun according Islamophobia the status of a serious problem. Worse yet, Secretary of State Hillary Rodham Clinton has joined forces with the Organization of Islamic Cooperation (OIC) in trying to find ways to suppress this fictitious problem by treating instances of what should be protected “Free Speech” as prosecutable “incitement.”

Our country is under a dictatorship. How many Freedoms are you willing to lose before you take a stand?