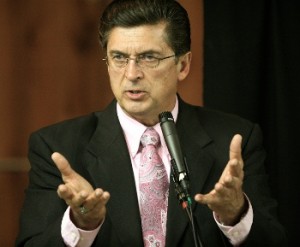 Writes Sheriff Mack: “Throughout the history of the world…Tyrants have never stopped their own corrupt ways. However, in our system of “dual sovereignty,” the States can do it. If we are to take back America and keep this process peaceful, then state and local officials will have to step up to the plate. Doing so is what States’ Rights and State Sovereignty are all about.”

By now we have all heard the cliches and seen the posters from the “Tea Parties” espousing freedom, less government, and perhaps most of all, how the federal government had better back off trying to shove their national healthcare down our otherwise healthy throats. The truth of the matter is all the slogans of “Don’t Tread On Me” or “Give Me Liberty Or Give Me Death” or “We’re Mad As Hell And We’re Not Taking It Anymore,” don’t mean a thing when compared to reality; the real and actual answer to all the protests, marches, and outrage.

The answer is in our own backyards! The States can stop every bit of it! That’s right, the individual States can stop “Obamacare” and all other forms of out-of-control federal government mandates and “big brother” tactics. If Arizona, Hawaii, New Hamshire, Texas, etc. want nothing to do with National Healthcare as proposed by Barack Obama or Congress, then all they have to do is say “No!”

For you skeptics who think the States could no more do this than fly to the moon, let’s look at the law. First, the U.S. Constitution is the ultimate and supreme law of the land. More specifically, the Bill of Rights was established, because some of our Founding Fathers, feared that the Constitution did not go far enough in restricting or limiting the central government. Hamilton was one of a select few who wanted a bigger and powerful federal government. However, several key states and powerful delegates such as Patrick Henry, said they would not support the formation of a new government if the Constitution did not contain a Bill of Rights, a supreme law to establish basic and fundamental human rights that could never, for all future American generations, be violated, altered or encroached upon by government. So the Framers of our Constitution came up with ten; ten God-given freedoms that would forever be held inviolable by our own governments.

The last of these basic foundational principles was the one to protect the power, sovereignty, and the autonomy of the States; the Tenth Amendment. This amendment and law underscores the entire purpose of the Constitution to limit government and forbids the federal government from becoming more powerful than the “creator.” Let’s be very clear here; the States in this case were the creator. They formed the federal government, not the other way around. Does anyone believe rationally that the States intended to form a new central government to control and command the States at will? Nothing could be further from the truth. Article 1, Section 8 of the Constitution details what duties the federal government will be responsible for under our new system of “balanced power.” Anything not mentioned in Article 1, Sec. 8, is “reserved to the States respectively, or to the people.” (Tenth Amendment) Hence, the federal government was not allowed creativity or carte blanche to expand or assume power wherever and whenever they felt like it. The feds had only discrete and enumerated and very limited powers. Omnipotency was the last thing the Founding Fathers intended to award the newly formed federal government. They had just fought the Revolutionary War to stop such from Britain and their main concern was to prevent a recurrence here in America.

In perhaps the most recent and powerful Tenth Amendment decision in modern history, the U.S. Supreme Court ruled in Mack/Printz v U.S. that “States are not subject to federal direction.” But today’s federal Tories argue that the “supremecy clause” of the U.S. Constitution says that the federal government is supreme and thus, trumps the States in all matters. Wrong! The supremacy clause is dealt with in Mack/Printz, in which the Supreme Court stated once and for all that the only thing “supreme” is the constitution itself. Our constitutional system of checks and balances certainly did not make the federal government king over the states, counties, and cities. Justice Scalia opined for the majority in Mack/Printz, that “Our citizens would have two political capacities, one state and one federal, each protected from incursion by the other.” So yes, it is the duty of the State to stop the Obamacare “incursion.” To emphasize this principle Scalia quotes James Madison, “The local or municipal authorities form distinct and independent portions of the Supremacy, no more subject within their respective spheres, to the general authority than the general authority is subject to them, within its own sphere.” The point to remember here is; where do we define the “sphere” of the federal government? That’s right; in Article 1, Section 8 of the Constitution and anything not found within this section belongs to the States or to the People. So where does health care belong? The last place it belongs is with the President or Congress. It is NOT their responsiblity and the States need to make sure that Obama does not overstep his authority.

Just in case there is any doubt as to what the Supreme Court meant, let’s take one more look at Mack/Printz. “This separation of the two spheres is one of the Constitution’s structural protections of liberty. Hence, a double security arises to the rights of the people. The different governments will control each other…” What? The Constitution, the supreme law of the land, has as a “structural protection of liberty” that States will keep the federal government in check? No wonder it was called a system of “checks and balances.” The States (and Counties) are to maintain the balance of power by keeping the feds within their proper sphere.

So do the States have to take the bullying of the federal government? Not hardly! The States do not have to take or support or pay for Obamacare or anything else from Washington DC. The States are not subject to federal direction. They are sovereign and “The Constitution protects us from our own best intentions.” (Mack/Printz) Which means the States can tell national healthcare proposals or laws to take a flying leap off the Washington monument. We are not subject to federal direction!

In the final order pursuant to the Mack/Printz ruling Scalia warned, “The federal government may neither, issue directives requiring the States to address particular problems, nor command the States’ officers, or those of their political subdivisions, to administer or enforce a federal regulatory program. Such commands are fundamentally incompatible with our constitutional system of dual sovereignty.” It is rather obvious that nationalized healthcare definitely qualifies as a “federal regulatory program.”

Thus, the marching on Washington and pleas and protests to our DC politicians are misdirected. Such actions are “pie in the sky” dreaming that somehow expects the tyrants who created the tyranny, will miraculously put a stop to it. Throughout the history of the world such has never been the case. Tyrants have never stopped their own corrupt ways. However, in our system of “dual sovereignty,” the States can do it. If we are to take back America and keep this process peaceful, then state and local officials will have to step up to the plate. Doing so is what States’ Rights and State Sovereignty are all about.

*Richard Mack is the former two term sheriff of Graham County, Arizona, who sued the Clinton administration during the mid-90s over the Brady Bill. His case went all the way to the US Supreme Court, and he WON!

Visit here to see video of Tom Woods: Nullification a toll we all have. The video is 35 minutes.